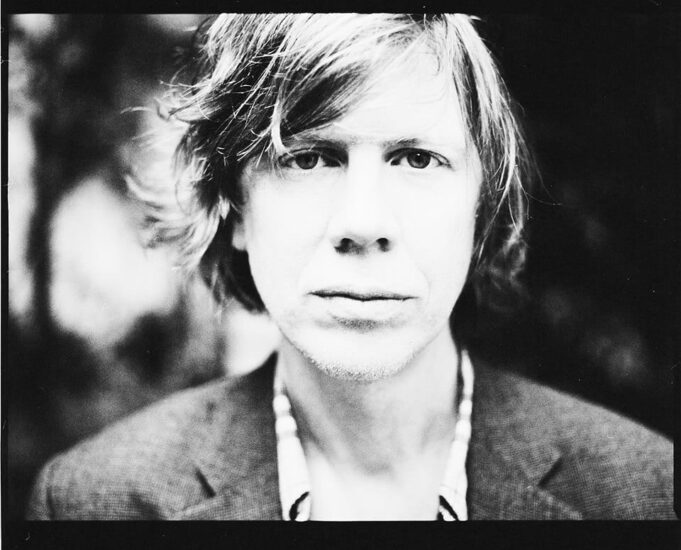 It seems like only yesterday that Greenfield was not much of a music town, back when the People’s Pint was one of the few places for a band to rock out on a Saturday night!

Northampton was where the action was, at venues that are still on the map’like Pearl St. and the Iron Horse. But hold on, as we slide ever closer to the third decade of the 21st Century, there’s a  new sheriff in the Valley, so to speak, in that Greenfield now  boasts not one but two venues who are committed  bringing in musicians of world-wide impact on a regular basis. Hawks and Reed brings in a steady variety of massive talent and Roots Cellar has kept pace with an almost opposite line-up of great music!

Thus it was that Thurston Moore, the guitarist/vocalist and main songwriter of Sonic Youth hit the stage in the Cellar on a chill early November night this fall. I’d never caught SY live in their whole thirty year run so when a friend offered me a ticket it was a no-brainer. I had to go and make it a four night weekend after playingmusic three nights previous, and I wasn’t disappointed!

After a set of lap-top weirdness [sorry, i don’t remember the name of the act] and an interesting and politically forceful recitation by world renowned writer Byron Coley, Moore took the stage with his four piece band, which had the classic R&R lineup of two guitars, bass and drums. That’s about where the similarity to a band like the Beatles, who had the same lineup, ends!

Happily, though Sonic Youth attained enough popularity to sign with the infamous David Geffen’s DGC label, their music is just too offbeat to spawn a festering culture of sycophantic imitators. No, there most likely won’t ever be “Wednesday night Youth nights”, cranking out “Evol”. like there are now hundreds of bearded mini-Deads reprising “Me and My Uncle” and “Sugaree” all over  the f’ing world!

First of all, who could figure out the guitar tunings? Although there wasn’t a single “out-of-tune” note that I could hear, I’d be hard pressed to tell you how the strings were tuned in this band. Thurston and his other guitarist started the show on vintage electric 12-strings. The Byrds immediately came to mind, but it would have to be the version that did a half hour version of “Eight Miles High.” That’s apt because this first piece, an instrumental of at least 40 minutes, it seemed, wove through a whole set’s worth of motifs and melodies, while remaining fundamentally rooted in the original  theme. Turns out it was dedicated in part to Alice Coltrane, just as “Eight Miles” was inspired by John Coltrane! This was music to arrive at your own meaning with. No kitchy announcements or “How ya doin’ Greenfields?”

This was meditative drone music, requiring patience for appreciation not usually required of today’s “I’ll just find it on  my phone”crowd! Yeah, you could say “trippy”, and I couldn’t help thinking I was hearing something close to the revolutionary vibe emanating from Sonic Youth in their 80’s heyday of LP’s like “Daydream Nation”. It didn’t hurt that most famous and long-standing Sonic drummer, Steve Shelley was holding down the rock -steady rhythms!

After a short pause and much applause, the group returned with two shorter vocal songs, more in the vein of the SY style, but updated. To paraphrase a Moore album title, this was a great night of “Rock n’ Roll” consciousness to counteract the insidious oblivious moronic nature of much of our public/political discourse as we plunge ever forward towards the year 2020.

This is the complete show from two nights later on the same tour from the video channel of markit aneight:

About the author:  David Boatwright is the band leader and guitar playing lead vocalist for the Pioneer Valley’s reggae favorites, the Equalites.  His many years spent working in record stores has served him well, as his wealth of esoteric musical knowledge is now being harnessed to our benefit.