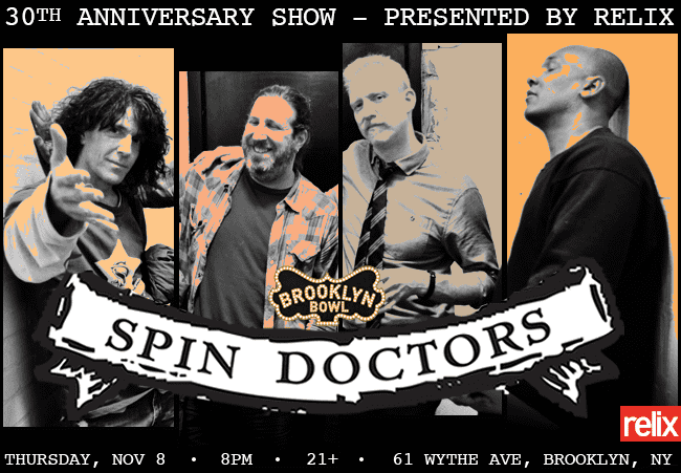 I saw the future of Rock and Roll this past Thursday night,and it looked a lot like 1989. The Spin Doctors  celebrated their much anticipated 30th anniversary at the Brooklyn Bowl,hosted by Relix, with a tight, funky and ferocious  concert featuring  core members, Chris Barron, on vocals and “stickin it to the man”, Eric  Schenkman, lead, rhythym and slide guitar, Mark White on lead bass and groovemeister- Aaron Comess on drums. 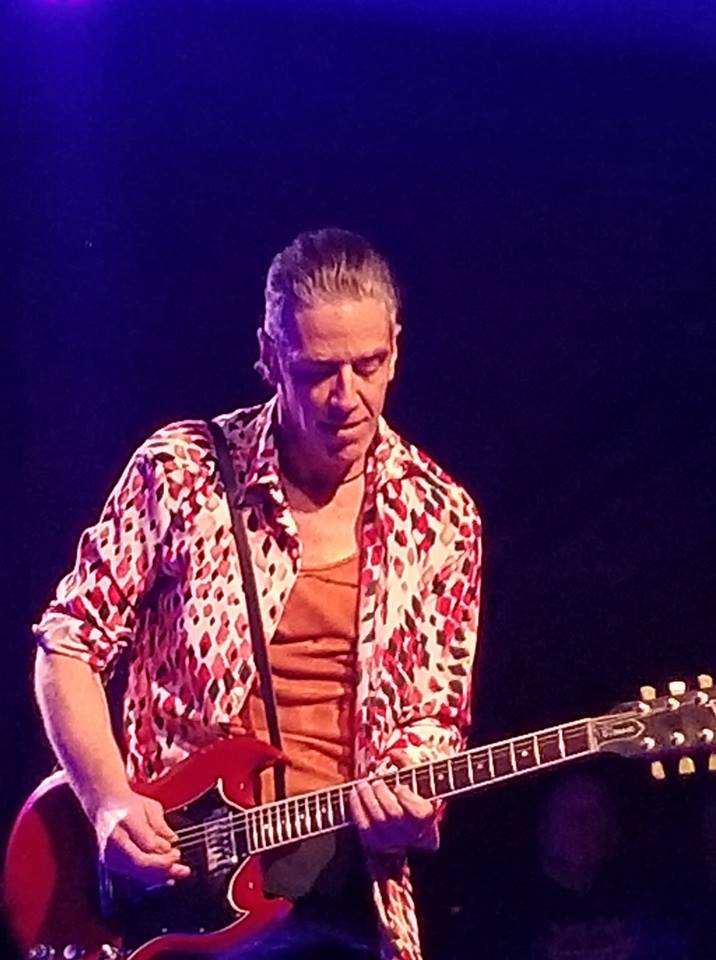 First up was a  gentleman who took the microphone and announced dramatically “Many of you may not know me, but some of you may know me” and immediately fans called out from the back of the room “Hi Walter!”.  Right off the bat you knew this was family, the same crowd you boogied with, stood on line with and hung out with and shared everything with at  The Wetlands Preserve back in 1989.  Walter, the former booker and announcer at The Wetlands Preserve, the iconic rock club in Tribeca where the Spin Doctors played as one of three resident house bands, apparently wanted to dispel a viscious rumour. The rumour  that he never liked the Spin Doctors before they were booked for The Wetlands was “completely untrue.”

The evening kicked off in all of it’s sublimely irreverent and unpredictable glory. The band then took the stage, or rather literally ran onto the stage, grining ear to ear, and with a rush of released energy launched into the crisp and punchy blues-rocker,  Shinbone Ally off of their  1991, 5X platinum selling debut studio album, released in 1991. Aaron Comess provided a relaxed and funky backbeat perfectly locked into Mark White’s virtuosic, phat bass lines. 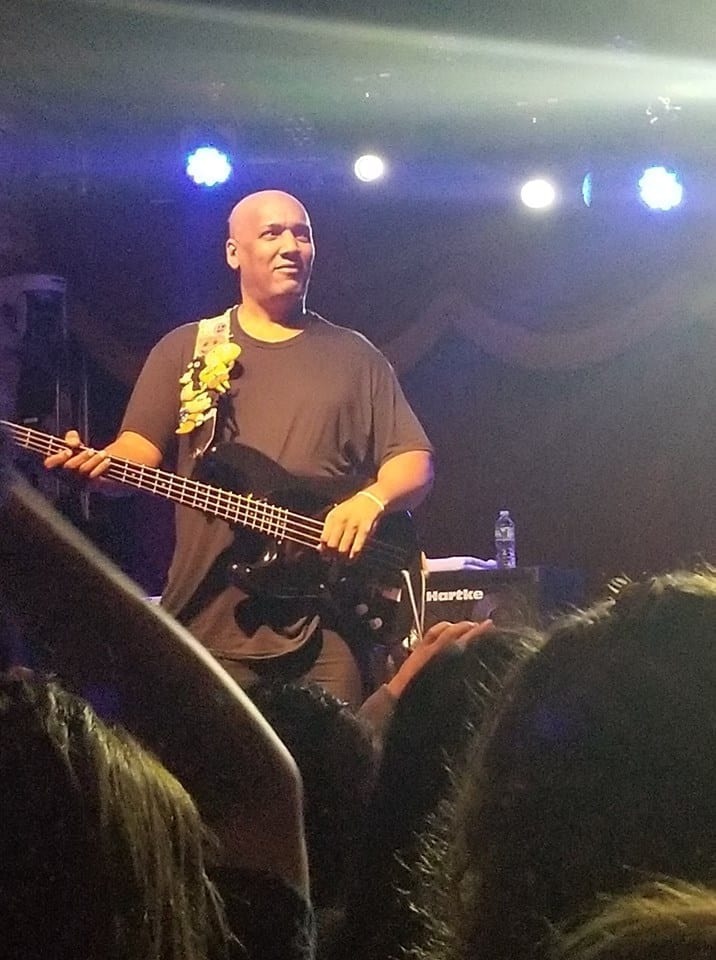 Chris Barron  who has suffered his share of debilitating vocal issues in the past was in fine form, his voice ebulliant and crisp.. He grabbed the microphone, and sang like an epiphany,  privy to some cosmic joke that he needed to share.   Barron lunged toward the edge of the stage, pointing at fans and engaging in some fine transportative dancing, and  at one point even hugged himself, his arms encricled around his back, like someone encased in a straightjacket moments before busting out.

Next up was Big Fat Funky Booty a ditty straight from the mothership, and not at all politically correct, delightfully  bawdy,  playful, tight and exuberantly fun, the way rock n roll was born to be. Barron and Schenkman took turns physically leaning in close to  one another, the dynamic duo, detonating  a highly contagious enthusiasm that electrified the audience and propelled the band into that realm where no words were necessary to communicate with one another. Cleopatra’s Cat was a  crowd pleaser, relaxed and tasty syncopated guitar  served up wah wah style by Schenkman, followed by their hit single Little Miss Can’t Be Wrong, and several more uptempo songs that had the crowd tearing off their boots and hitting the dance floor. 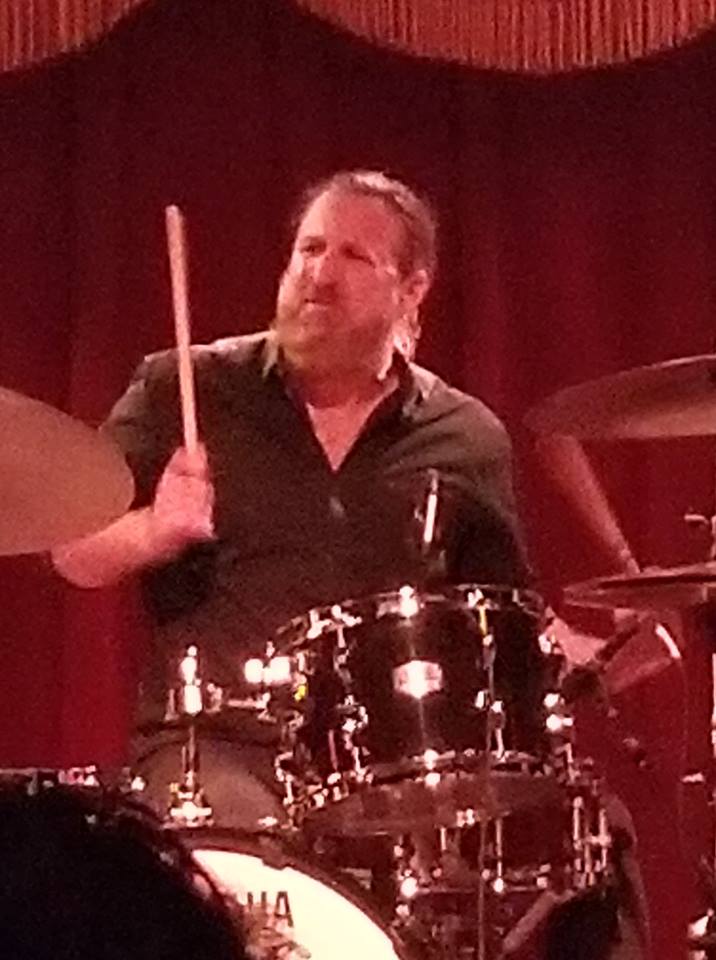 Your Moma’s a Pajama,  showcased Killer guitar and bass grooves, tethered  to Comess’s surefooted drum base that anchored the proceedings while Barron’s  stacatto punky rap vocals never missed a beat and radiated a kooky charm.

After a short intermission, The Spin Doctors returned to the stage with the riffcentric  What Time is it? Mark White shines on this funkfest, pumping the melody with thick and busy  contrapuntal bass lines, Comess on drums precisely in the pocket, perfectly in the groove. The audience was bopping along and singing this note for note.

There was much bantering between Chris Barron, the band and the audience, many of whom  have followed this band since their early live concert days s in various small venues  of the East village in NYC .  Barron graciously paid homage several times during the night to various artists who have shared those stages with The Spin Doctors, referring to Joan Osborne, John Popper and Blues Traveler and Joey Miserable and the Worms, a name I have rarely hear in recent years.

He stated and restated how grateful he was to be able to share this night and their music with us.  I have heard these words many times at concerts before but rarely have they ringed as true or sounded so sincere.  At one point Chris picked up the microphone stand turned it upside down and attempted to pierce the electronic equipment directly overhead,  saying he was “stickin it to the man”.

The crowd cheered wildly and for a few moments  it felt like the old days, where such sentiments were articulated loudly and often. Another standout for the band was Jimmy Olsen’s Blues, off the Pocket Full of Kryptonite album, where Chris Barron instructed the surprisingly musical audience to sing along with the band.

The fans who clearly have waited and were relishing every moment of The Spin Doctors’ return, sang without missing a beat. 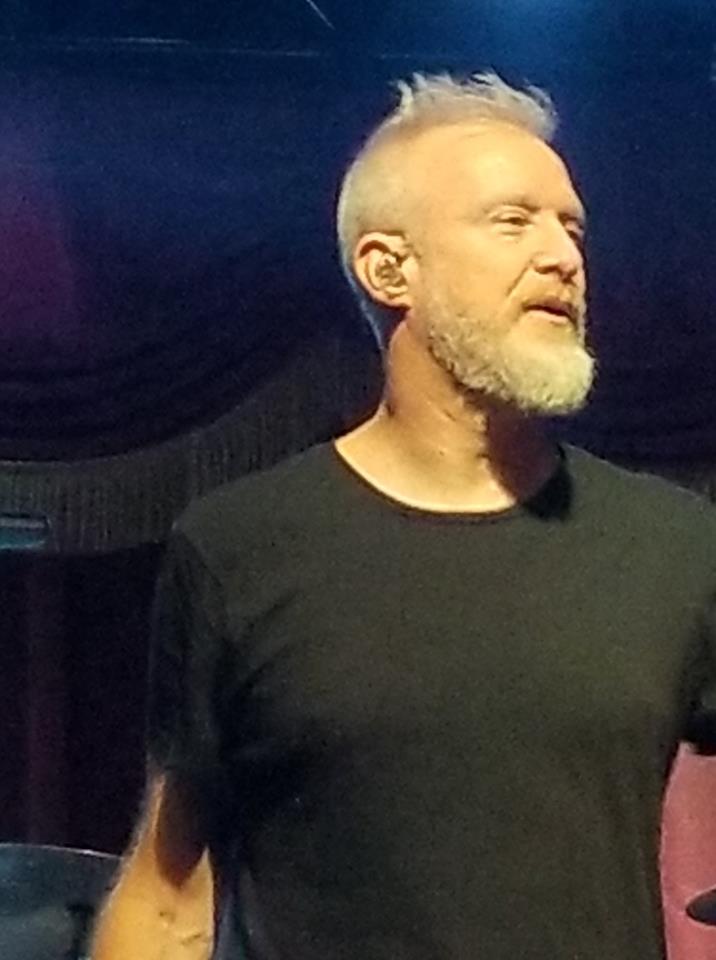 Another highlight of the second set was Biscuit Head, a frisky, swampy, gumbo of a song, with a Bootsy inspired bass solo by White. The Grammy award nominated hit Two Princes  followed, and pops from the first intro drumbeats, fresh and  vital, which is no small feat considering how often it had been played on the radio. The riffs may be basic, the premise clean and simple, the song may rely on  only 3 or 4 chords but they are the RIGHT 3 or four chords, and that’s what it’s all about. Eric Schenkman on vocals and guitar is a dazzling tour de force, whether playing straight funk infused blues, tasty pop or slide, or sharp explosive hair raising jazz infused runs up the fretboard. He charges out of the the bullpen on Lady Kerosene. Schenkman plays with the wisdom of someone who has been there and back, and lived to tell the tale.  Whether ripping a killer solo at the speed of light or navigating improvisational digressions he seemed relaxed, never missing a beat, and having the  time of his life.

Lady Kerosene led into a monlithic drum solo by Aaron Comess, who seemed to reinvent tempos, executed tasty, funky syncopations,kicking up the jam to which  Mark White.who stood center stage added fingerpicking  bolts  of bass which pinged off the walls of the Bowl reverberating their massive tones through the solar plexus of everyone standing there.

The band returned to play two encores.First up,  House, a happy uncontrived ditty from 1994, about defiance and dance, and according to Chris that “we used to play  in the ratty shitty clubs in NYC where you used to get killed”.  “This is my house, if you don’t like it, just get outta, just get outta”.  You can’t get more direct than this, no artifice, no confusion, this aint no disco, this aint no foolin around… just exuberant funky finger snappin Spin Doctors. It must be noted that there was such an palpable atmosphere of joy in the room, such a relief of world weary tension and worries.  This is the remarkable kind of effect that the Spin Doctors have on their audience, which in these difficult times is very much appreciated. From the video channel of Jennifer DiBrienza

The final encore was Larabys Gang,a song about the simpler pleasures of going to a show, listening to the music and the  joys of taking the bitter with the sweet, from their album Spin Upside Down,played  after a timely rap by Chris about growing older and the realization that these are the “good ol days”.

This was not just a concert, but an event, a reclamation of the band as a vital and thriving, and creatively growing unit. And  as Chris Barron stated poignantly and eloquently, “we will never be as young as we are today”.   It is true that the Spin Doctors will never be as great as they were tonite, unless it is at another  Spin Doctors concert hopefully in the near future, which I for one highly anticipate.