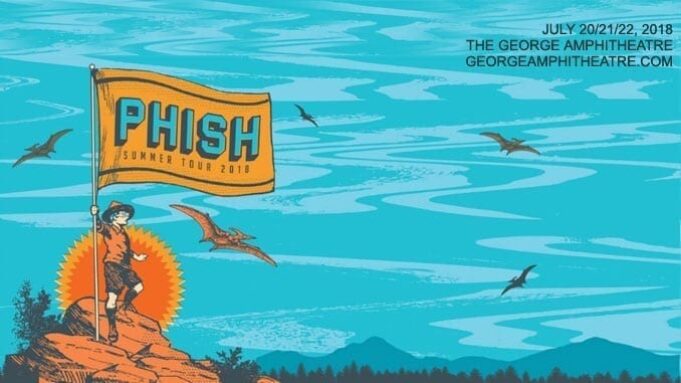 We have been getting continuous feedback and updates on this article.  New information is available:  Grant County Sheriff’s Office confirms assaults at the Phish Gorge shows, and seek assistance from the public.

We are leaving up this article below strictly for historical perspective as to how this unfolded and to keep a record of the prior information.     Editor’s Note:  Updates are provided throughout the article as they become available. Vermont’s finest just finished three nights of at the Gorge in Washington State over the weekend.  Reddit and Facebook were alive the morning after with reports of possible violence including reports of fans (perhaps people of color) attacked with rocks by possible neo-Nazi groups. The Gorge, located in Grant County Washington is one of the most picturesque venues in the country.  The vistas and views from audience and stage are unparalleled and it is an experienced venue having hosted concerts there for decades. There were reports from fans and online commentary that described attacks perhaps motivated by conflicts between sellers and buyers of nitrous in the parking lot, including rumors of people attacked and hit in the head with rocks.  These claims included reports of arrests and hospital visits. We contacted the Grant County Sherriff’s Department and spoke with Kyle Foreman, who is the public information officer.  They too were aware of the reports on Reddit and Facebook and indicated that initially “nothing out of the ordinary” was reported over the weekend and they are not sure if the information is true.  Deputies are investigating and hope to report back about their findings.”

UPDATE: JULY 24 10:42 AM   FROM KYLE FORMAN, GRANT COUNTY SHERIFF’S OFFICE PUBLIC INFORMATION OFFICER:  ” The Grant County Sheriff’s Office is investigating one complaint of assault which happened at the Phish concert at the Gorge Amphitheater on July 22, 2018. The investigation thus far has not uncovered hate or bias as a factor.”

We spoke with an attendee who has decades of Phish concerts under her belt.  She said, “There were probably at least 25 people in the crew that was selling nitrous over the weekend. Blatantly out in the open everywhere. Highly organized, lookouts w/ear pieces, etc..”

Earlier information, posted July 23: “Deputies went out this morning (as of 11:23 AM July 23) to investigate all claims, and at that time they were unable to find any witnesses. Any victims or witnesses had not yet come forward with any evidence.”  Police are still gathering information.  If anyone has photos or eyewitness accounts of the incidents, contact the Grant County Sheriff’s office.  (updates below)

Mr. Foreman indicated that it is normal procedure to tally the number of arrests at a concert at the Gorge following a big weekend, and that the information will be available soon. Quote from fan Aaron Darter: “I didn’t see anything like that at the shows- the band really killed on Sunday night. Nitrous was flowing stronger than I’ve ever seen- including yesterday, when the cops started getting involved. I did see one guy picking a fight this morning (Monday), but he was just burned out. Lots of burnt out and tired people on-site this morning. Twitter and Facebook fan sites including PhanArt are putting up pictures purporting to show arrests from the lot of nitrous sellers and possibly the people involved with these incidents but they have not been corroborated by the county.

UPDATE:  Kyle Foreman called at 4PM est, acknowledging that the County Sheriff’s department is now aware of a confirmed incident, is currently investigating, and will update us as more information is available.  “We have an assault complaint from one victim now.”  They were unable to confirm the hospital transport.

Update 4:10 PM est:  The Quincy Valley Medical Center was contacted to see if there was any unusual activity from the weekend.  Their public relations spokesperson Glenda replied, “We did have some (patient influx) from the concert, but it was not overwhelming. Just folks who truly needed to be in an emergency room, we did not see a surge. We have yet to tally the e/r reports from the weekend.”   When asked specifically about assaults she said she had not gotten any indication of assault victims but would report back with more information should it become available. As of 4:13P July 23 the Gorge has yet replied to our request for comment. Music from Phish at the Gorge below starts at approximately 3:20 mark. https://www.youtube.com/watch?v=ziJawRXmiaY Hey Aaron Darter, what did you think of the shows?  “I have to say: Last night’s sets were some of the best I’ve heard. They were slow Friday and Saturday night and were fire last (Sunday) night.”