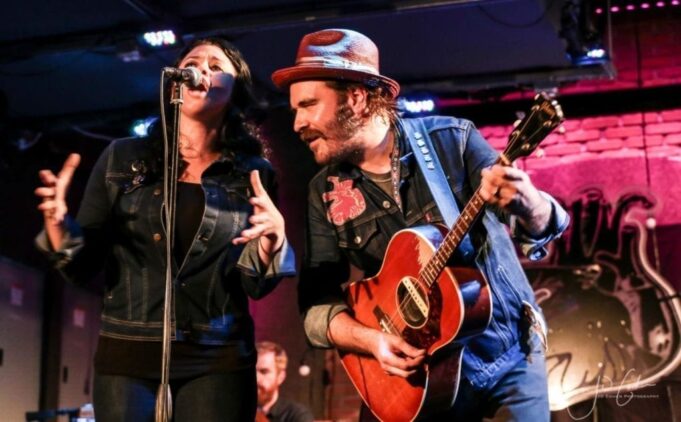 A full gallery of photos from this show  is located here.

Ohio band Red Wanting Blue made a stop in Boston on Monday night in support of their new Will Hoge produced album “The Wanting”. Red Wanting Blue have been around since 1996, touring and recording continuously. Although they have received critical acclaim and a level of commercial success, you could be forgiven if you weren’t familiar with their music.

Although they have appeared everywhere from David Letterman to NPR, reaching #3 on the Billboard Heatseekers and having played Boston venues for years, they have been flying well below the radar for most music fans outside Ohio and parts of the mid-west. However, if you are one of the lucky few to have been in attendance at Monday’s show in Boston you already know about the stirring performance the band delivers.

Lead vocalist Scott Terry is a true American troubadour with a knack for combining powerful and gravelly vocals with deep emotional tenderness and good humor. Many of the 18 songs played during the approximately 90 minute set fuse the tragic and the triumphant and lean heavily on the redemptive and tormented quality of the open heart. It’s no surprise the stage was adorned with anatomically correct images of hearts, not the romantic kind you see on Valentine’s day cards.  Terry even had a heart patch sewn on his denim jacket so he wasn’t literally wearing his heart on his sleeve but it was pretty close to it.  Songs like “I’ve Got A Feeling It Hurts”, “Keep Love Alive” and their anthem “Hope on a Rope” all convey the sadness of life amid the search for salvation. Although everyone received song writing credits on the new album, Scott is the focal point. A friend recently described him as the bastard son of Eddie Vedder and Tom Waits and that seems a reasonable description in both Terry’s vocal quality and stage demeanor.

On Monday night Scott definitely seemed to be having a good time and in good cheer. There was no sign that the band was road weary as they wind down their current tour. It May have been a Monday night at the half filled City Winery but Scott Terry and the band did their best to make it feel like a rowdy Saturday night and the jubilant crowd responded accordingly. Red Wanting Blue may continue to fly below the radar but now you know and next time they come to Boston or a city near you, you’ll have no excuse for not seeing them. Liz Brasher opened the night with her band for a great set of bluesy roots music.  She has been touring all over the country and this looks to be the end of the current leg of her tour.  Her sound was a perfect compliment and appetizer for the night.

A full gallery of photos from is located here.