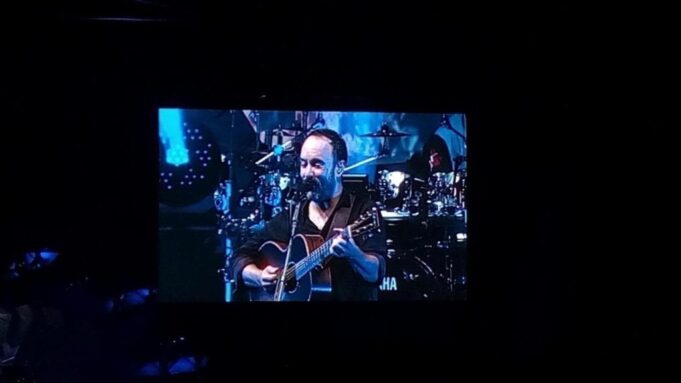 To XFinity..  And Beyond…

From the video channel of Sean Roche

It’s become an annual rite of passage for my wife, and sometimes me, and seemingly much of America. Visiting the regional shed amphitheater to see the latest tour by America’s kings of outdoor concerts, the Dave Matthews Band. So we were a little worried as in the days leading up to June 23 the weather report was increasingly ominous including ‘high likelihood’ and ‘afternoon thunderstorms.’ But we packed up an easy up, grabbed our ponchos and headed down to the capital of Connecticut.

We found a private parking lot for $30, and pre-showed with some great people all around us. One lot neighbor had a table with a giant list of Dave Matthews Band shows that the table had pre-gamed at… I chatted about live music with several different car loads of people, we partied up, and then set out across the lots to the XFinity Center, formerly Hartford Meadows.

Incredibly, the rain held off and not long after the announced show time the Dave Matthews Band took the stage and fired up the concert. What followed was within minutes of three hours straight of pure rock and roll good times, summer soaked and groovy from start to finish. The touring band is quite large including drums, bass, two horns, two guitars, and now keyboards courtesy of Buddy Strong.

Strong’s presence is quite good, ably holding down occasional keys and vocal vamps and solos (as in during Stand Up), but mostly he filled in the sonic spaces vacated by Boyd Tinsley who is no longer in the band. He filled in that job, and also Tinsley’s penchant of being an exceptionally smiley and shiny presence on stage, Strong had no problems taking up that slack.

From the video channel of Sean Roche

As Dave said once during the leadup to a song, some of the songs are new, some are older, and some are in between. This was an apt description of the set list which leaned heavily on the new album, which debuted at #1 this week on the album charts. Come Tomorrow is filled with songs that demonstrate DMB’s ability to move around sound, able to lift heavy sonic sections and spin them around. Samurai Cop is a good example, it is less of a dance along or message delivery vehicle, but more of a beautiful and steady assembling and reassembling of sound. It’s like the beauty and choreography that you feel and see while looking at a container ship being unloaded, or fork lifts operating in synchronicity in a warehouse- both beautiful and strong.

The Dave Matthews Band is very comfortable with their sound- they know who they are, and are able to deliver hours of that sound from one song to the next. The audience is very patient, fully trusting in Dave’s ability to feed them exactly what they crave. Both artist and audience have the patience of the frequently sated, there isn’t any stress of “I really HAVE to see THIS song…” Everyone knows that there is another great song following this one, and tomorrow there will be another show, and next summer another whole list of them. Don’t stress, DMB will take care of you.

While in the past I felt as if the crowd was skewed toward high schoolers, this year it felt like there were more mature folks. I, apparently, am very amusing to a certain sub sectre of the DMB crowd, the Bro Squad or whatever, who this year found the fact that I danced at the concert and had a hat was pretty funny. But this faction was lighter this year than in year’s past and the crowd watching was in full force. ⁯

The last time I had seen DMB at this venue a few years ago, there were some special guests who came out and there was also a few cover songs. Not on this night, it was pure DMB, both in song selection (aside from a quick Prince Sexy MF’er ending to one song) and in the lack of guests  (I kept expecting Ben Golder-Novick to come out and blow some sax). The difference in personnel was evident here and there, both with the absence of a certain violin line, or the presence of a new keyboard part, a new guitar solo, a new sax flourish- overall the changes weren’t overly jarring.

Perhaps Louisiana Bayou suffered a smidge, and one of the songs that I consider a Tinsley song, Ants Marching, was absent from the set list so I couldn’t tell how that might be handled. Waiting for the encore my wife and I chatted about what we thought was coming next.. I thought that there were still a few hits left and predicted The Space Between which started the double encore, and the Trippin Billies that I had heard in my head before the show came to fruition as the last song of the night.

Soothed and sated, we filed out with the crowd and to our car, happy to have had one more great meal of a concert, and ready to enjoy the next serving whenever it may come by us again.

SET LIST: That Girl Is You One Sweet World Granny Crush Samurai Cop (Oh Joy Begin) Stay or Leave What Would You Say Can’t Stop Jimi Thing Captain Warehouse Black and Blue Bird The Song That Jane Likes Lying in the Hands of God (American Baby Intro interpolation) Funny the Way It Is Come Tomorrow Stand Up (For It) Louisiana Bayou Encore: The Space Between Tripping Billies