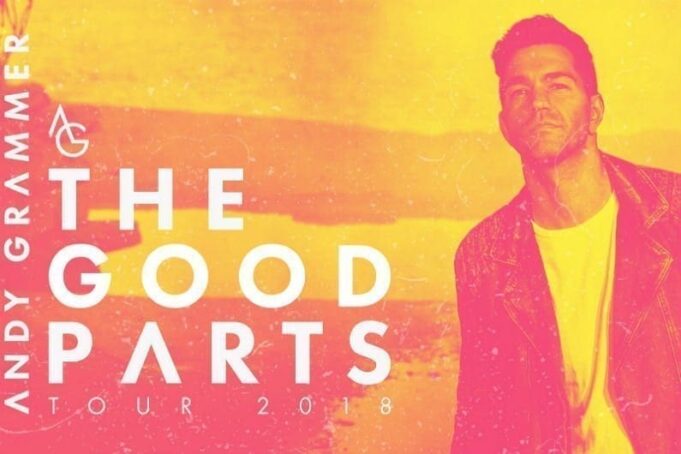 Andy Grammer brought his The Good Parts tour to the Casino ballroom in Hampton Beach NH this week. The hits packed showed featured a full band with great production and choreography.Opening the show was Australian pop singer Quinn Lewis, who performed in the US for the first time outside of Nashville TN this night. His quick set included only five songs, a set that included material that is happy, bumpy and while you could feel his nerves on stage, you could also see the talent that is developing in this performer. He warmed up the crowd quite nicely. He displayed his own good time with huge smiles and dancing during his twenty minute set.

Grammer took the stage with his band which included drums, bass, guitar, keyboards, and two backup singers who joined Grammer all night in a dancing frenzy. There was a lot of choreographed movement between the three of them front and center. Grammer himself was featured mostly on vocals, of course, and guitar- but took a turn on the kehyboards and even whipped up a trumpet at one point during the show.

The show was a hits package for sure for this artist who has spent most of his young career on the Top 40 charts already. The set list included show opener Good to be Alive (Hallelujah) which was a great, bumpin way to open the show. The show was almost exclusively Grammer’s originals but he would sometimes tease during a song a cover from other artists, including quick references to Demi Lovato’s Sorry not Sorry, Khalid’s Young Dumb and Broke, and Radiohead’s Creep. Grammer recognized his tour manager Welshy, by bringing him out on stage and giving him a beat up old guitar with the Welsh flag on it. The crew had fixed up the guitar and presented it, as a symbol of their appreciation for his hard work on this tour. Grammer had Welshy sturm a few licks and encouraged the crowd to go nuts for him, like he was the rock star.

But it was Grammer who ruled the night with his own stage presence. The show was a showcase of Grammer’s many hits including: Honey I’m Good which closed the set, Fresh Eyes, the crowd pleasing Keep Your Head Up, Fine By Me and hit after hit. Grammer was great at acknowledging the other members of his band, and allowed them to stretch out on extended versions of his material, at times jamming the tunes out to new ideas and destinations. The songs were punctuated by story telling and Grammer’s ability to reach out to the crowd and share their experience with his own. He shared a story about singing songs to his child who was still in utero, while another story pertained to Native American mythology turned to useful modern day advise. Returning for the encore Grammer took to the piano for a soulful and contemplative Smoke Clears.

From the video channel of kimclements1