David Crosby and Band with Mary Chapin Carpenter & Chris Hillman/ Herb Pedersen
Tanglewood  Lenox MA
June 16, 2018
by Rob Wolfson
Rob is a talented musician who is in bands including The Englishtown Project and Reverend Jefferson – Celebrating the Music of Jefferson Airplane
Check out the Live Music News and Review.com Facebook page for updates and announcements.
To submit an article an article or review, or to just say hello hit us at [email protected]
This was a show where the whole was greater than the sum of its parts, which is saying a lot, since the “parts” were all sensational. Start with Tanglewood, one of the most iconic and beautiful music venues in the country; perfect weather and impeccable sound reinforcement. Then add in three veteran acts that were at once compatible yet  distinctive, and you have the makings of an A+ evening.
The “warm up to the opener” Chris Hillman & Herb Pedersen was a delightful surprise. They weren’t listed on the bill or even on the tickets – I had no idea who they were until about 2 songs in when Hillman referred to “my old buddy” David Crosby (Hillman of course being one of the original Byrds, before starting the Flying Burrito Bros and Desert Rose Band) and he then introduced Herb Pedersen, who’s credits read like a who’s who of California singer / songwriters. These two, as it happens, have been playing together for over 20 years and delivered a short, lovely set of country / folk tunes that featured the considerable vocal and guitar talents of both men. As a bonus, Crosby came out for a Turn Turn Turn set closer that, with its spare instrumental arrangement, put the distinctive three part vocal harmony front and center to a dramatic effect. 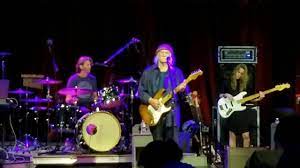 After a brief intermission, Mary Chapin Carpenter and her band came out and had the entire house under her spell in short order. Unlike Crosby, who’s band is relatively new, MCC has been on the road with her band for years and it shows, in the best sense. Her voice, floating effortlessly over the consistently intoxicating texture of her band, is a unique, visceral marvel – perfect for the wistful imagery of her lyrics. It would be convenient to lump her in with the “urban country” genre, or as a classic singer – songwriter, but MCC and her band’s superb set at Tanglewood defied categorization. It was telling that the songs she performed from her latest album, Sometimes Just the Sky, sounded much better live than on the nevertheless well-produced recording. Overall, MCC just took us away. I’ll look forward to seeing her again when she has the evening to herself.
What a character David Crosby is. Its always seemed like the pinnacle of irony that a guy as extroverted as Cros is known as the consummate harmony singer; someone who’s been mainly content to cede lead vocals to others as a member of The Byrds and CSN (or CSN&Y) – two of the greatest acts in rock history. Ditto his guitar playing – while known as a rhythm guitarist in the aforementioned bands, in his masterpiece Guinevere, for example, his open tuning composition is one of the most beautiful guitar pieces ever. 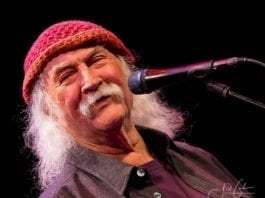 And now, in his mid-70’s, after surviving one of the most turbulent lives of even the most reckless rock n rollers, Cros has reestablished himself as one of the most original and ambitious singer / songwriter / band leaders of his generation. His dark, powerful voice has somehow remained in fine form and he’s also found,the ultimate vehicle for his songs in his current band of outstanding players including his son, keyboardist / songwriting partner James Raymond, who Crosby met when Raymond was 30 after being given up for adoption as a child and the guitar prodigy Jeff Pevar, who contributes sonic murals of accompaniment.

From the video channel of Mystic Traveler

Crosby’s set at Tanglewood featured much of his recent material (from 3 albums in the last four years!) along with several of his best loved classics like Wooden Ships, Long Time Gone, Ohio and Deja Vu – all benefiting from the treatment of his current band. Of all of his southern California contemporaries, Cros always seemed like the one who could have just as easily come out of the San Francisco scene, as his collaborations with both Jefferson Airplane and Grateful Dead members suggests.
His newer songs, with their more exploratory jazz vibe, continue in that direction which suits him just fine. Whether by design or simply as a result of alienating all of his former band mates, David Crosby, at 75 yrs of age, has actually established a genre of his own and, with the help and inspiration of his son, may still have some his best work ahead of him, which, after all, helps keep us young along with him.
From the video channel of Mystic Traveler
Check out the Live Music News and Review.com Facebook page for updates and announcements.
To submit an article an article or review, or to just say hello hit us at [email protected]