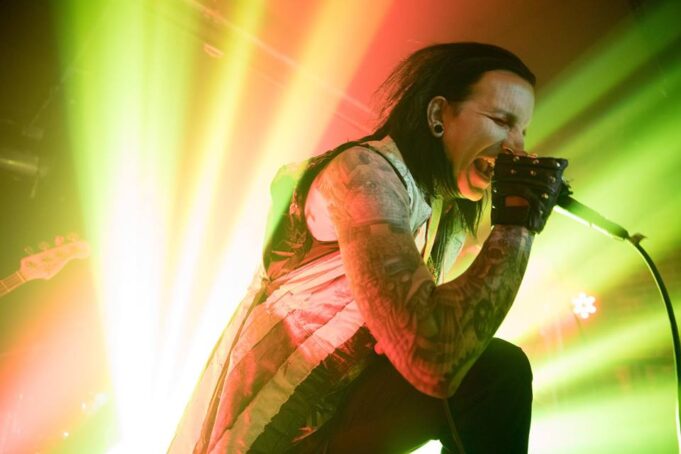 Ever go to a concert to see a band and get blow away by another band on the bill that you never even heard and they just knock it out of the park? Well, that’s what happened this past Wednesday at Tommy London’s Birthday Bash at Arlene’s Grocery in New York City.  Panzie is that band.  It was an all-star show with Tommy London doing an acoustic set before his world premiere video of “Sugar Red.”  Johnny Pisano was up next and played a great set, then Panzie and rounding out the bill were the rockers The Sweet Things.

Arlene’s Grocery in New York’s Lower East Side is a small venue- it maybe holds a couple of hundred people at capacity- in its basement and the place was packed to the brim.  I was there to photograph Johnny Pisano and after his set, I was ready to leave, but another photographer urged me to stay and said “you’ll thank me later.”  Well, I thanked him and I just couldn’t get over the set.  It was very theatrical and I’m sure not like any other show that the small Arlene’s Grocery has ever had before.

There were costume changes and the lighting just knocked my socks off.  They had spotlights, laser lights and a computer dedicated to the lighting.  I thought that I was in an arena watching a huge band. I took shots of the show, but didn’t review the show, as it’s tough to review a band that you’ve never heard their music before, so I’ll give some of my impressions and the set list.

Panzie sounds like a cross between Motörhead, Rob Zombie and The Cult.  Their sound is old school punk, metal, Goth rock and industrial.  For the song Dance, it’s the first of many costume changes of the night, Cadic disappears off stage returning in a red sequin jacket and red sun glasses as if some sort of demonic Vegas performer.

On Take Off Your Mask each of the band members wore clown masks, very simple yet effective.  On Time’s Up, Jasin Cadic, the lead singer wore an army helmet and goggles and held a sign throughout that said “The End Is Here.”  On Alphabet Soup Cadic wore a pigs mask, a bloody butcher uniform and held a meat cleaver.  For the song Clown, balloons were dumped into the audience and as the audience batted them around Cadic, with more balloons tethered to a noose around his neck, making his way to the center of the dance floor to perform the song.

Finally, during Say Something, Cadic wore an Orange jumpsuit with a black hood and he was carrying a strong laser-like spotlight as were other “extras” who jumped on stage for a dynamic effect. Panzie just released a new EP The Joke’s On You which is available everywhere.  Panzie is a band that you just have to see for the spectacle of seeing a great live rock ‘n’ roll show.  You can follow them at www.panzie.com or FB Panzie* or on IG at @panzierocknroll