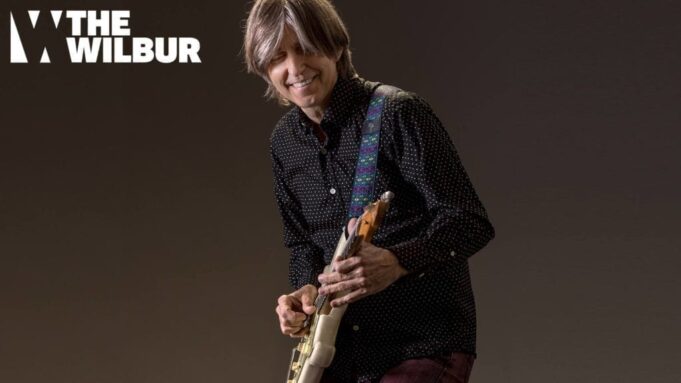 I’ve been a fan of Eric Johnson since I was in my early 20s, although I never got to see him back in the day. My first time seeing him was at the House of Blues (that used to be) on Sunset Boulevard in Los Angeles back in 2012. I got even luckier that night in that another guitar great, Joe Bonamassa, happened to be in town and hopped up on stage to join in for a couple songs!

You can check out that video I posted to an old channel of mine:

I saw his acoustic set last year, also in the L.A. area, at The Rose, coincidentally enough, in Pasadena, CA. My boyfriend was out in L.A. on business and we extended the trip a bit. That was an amazing show! Just Eric onstage with a guitar and piano. He joked he was still “learning” to play acoustic since he’s always been an electric guy. We should all have that learning curve!

One month later I took my then 14-year-old son to see a conversation with Eric at the Grammy Museum, again in Los Angeles, and loved listening to him talk about inspiration, songwriting, and technique. A funny note from that night:  my son and I got to meet him briefly afterwards and I told Eric that my son was also a guitarist and I was taking him to see all my faves, which included him. When I mentioned to Eric that I had taken him to see Jeff Beck the summer prior, he lit up and excitedly asked my son, “How did you like THAT??” It’s always fun to see one of your idols still be floored by another idol. But I digress.

A big storm hit New England the night before Eric’s show at the Wilbur in Boston in March. However, and fantastic news for us, the roads were absolutely fine by the next day and off we trekked to first meet up with a good friend who was in town to speak at a conference that wound up getting cancelled due to the weather, but lucky us, we got to see her. Then we popped across the street to the Wilbur for a much-anticipated night of Eric Johnson music. Let me just add here that The Wilbur Theatre in Boston has become my favorite place to see artists. It’s just small enough to get that intimate feel, it’s never terribly expensive to get a great seat (as far as concert ticket prices go these days at least), and it’s pretty easy to get to as well. What a treat this show was!

Eric Johnson performed Ah Via Musicom in its entirety for the album’s anniversary tour. They never do say which anniversary though. I’m just calling it “close enough” for a 30th given that the album was actually released in 1990. If you’re not a fan or that familiar with Eric’s music, but you grew up in the 80s, you still have to recognize the unmistakable opening soaring guitar riff of “Cliffs of Dover.” The album was played from top to bottom and with original band members Tommy Taylor on drums and Kyle Brock on bass.

Johnson opened his show with he and his band joining opening act, singer/songwriter, Arielle, onstage and then went straight into the set running the gamut of his tracks including a fitting tribute to the late, beyond great, Stevie Ray Vaughan in “S.R.V.” Adding in a couple covers starting with the Beatles, of course, Eric’s version of “The Night Before” had everyone singing along as you would expect. Who doesn’t like the Beatles? I don’t want to hear it if you don’t either! I have to say, I was beyond happy to hear him break into Led Zeppelin’s “Black Mountain Side.” Just Eric with an acoustic guitar – you can’t get any better than that in my book.

I managed to get a video of that song – you can view it below:

I encourage you to really watch this guy’s fingers. When someone says they make it look easy, this is what they’re talking about. It is so seamless. In fact, there’s an entire YouTube channel devoted to Eric’s right hand – showcasing the unorthodox upward picking style he uses. I did attempt additional videos, but was promptly shut down by the venue’s powers that be.

Ah, well, I’m sure there are some out there! We went from Zep to a duet with Arielle on one of her songs, “Wanderlust,” a quite poignant piece. Arielle is another Texas player and she can definitely sing and play. To be perfectly honest, she just wasn’t my cup of tea. That’s really nothing against her at all though. She’s got some chops both singing and playing for sure and was a fine opener for Eric. The duet with Arielle was followed up with “C.W.” performed by just Tommy and Kyle with no Eric on stage this time.

Tommy and Kyle were both original players on Ah Via Musicom, released in 1990. Tommy has never really stopped playing with Eric and Kyle has been on quite a bit of his offerings. With just three guys up there, the reproduction of this iconic album was amazing. After a short intermission, the band launched right into Ah Via Musicom with the haunting strains of the title track. There’s truly not a bad song on this album. Personal favorites of mine are a tribute to George Harrison, “Song for George,” “Desert Rose,” “Righteous,” and “Nothing Can Keep Me from You,” not to mention the previously referenced “Cliffs of Dover.”

“Trademark” is just that, a signature instrumental that you’d know anywhere. Ah, hell, I only left off four songs – the whole album is fantastic! They closed the show out with “Western Flyer,” that was featured on his first live album, Live from Austin, TX in 2005 and bringing Arielle back out for an encore with the spiraling, “Zap,” a song that found itself re-recorded on the 1986 album Tones after being held in legal limbo from an earlier album. You may notice I use flight references quite a bit when describing Eric’s songs. His music has always had a soaring, climbing, spinning quality to me that has always evoked a vision of flight. When all is said though, it’s seriously hard to come up with the appropriate number of synonyms for amazing and fantastic, but that’s pretty much what this whole review should be.