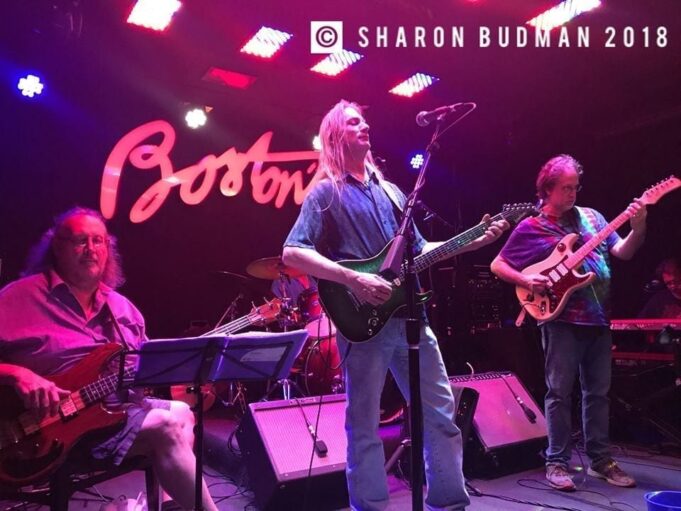 In all my many years of living in South Florida, I had never ever been to Boston’s; guess I didn’t know what I was missing.  Such a fabulous location, literally across from the Beach in Delray.  Met a friend of mine (we met at a concert in NY) who was coming from a bit further north and this was a great meeting point in between. When I arrived, the place was packed with diners of all ages and there was a waitlist for a table.

I found my way in and straight in the back was the stage and a whole area cleared out for dancing… and dancing they did.  The crowd of Deadheads of all ages began rolling in; what a nice crowd it was. Boston’s on the Beach is Crazy Fingers’ home base; they have their weekly “Sunday service.” This evening, Pete Lavezzoli was fresh off the road, having flown in that morning from his tour with Melvin Seals and the JGB Band.  I had the pleasure of sitting and chatting with Pete during the set break. It was such a treat. I talked with Pete about his recent run, touring with Melvin Seals and JGB, and what a busy tour that was 21 shows in 24 days.  It was quite exciting as they welcomed two new back-up singers, Sunshine Becker formerly of Furthur and Lady Chi formerly with P-Funk. They were also joined by Ron Holloway (who has played with Susan Tedeschi, Dizzie Gillespi, Warren Haynes, etc.) on sax for most of the shows.

Gallery of photos is here.

As far as Crazy Fingers, they’ve been part of the Florida music scene since the 1990’s. I asked Pete for some insight into Crazy Fingers (more than on what one could gleam from their Facebook page or websites). I wondered what was special about the band and what sets it apart from other Dead tribute bands. Pete’s response was nothing short of insightful.  He described what makes Crazy Fingers unique from many, if not all of the bands in this tribute genre, is that they NEVER use a setlist. (That to me was unbelievable.) They literally decide which songs they’ll do as the show goes along, depending on the “feel of the audience and the vibe.” He said, “it’s always unplanned.”

He further explained that they also have the “widest breadth” to draw from. Crazy Fingers plays “everything from the Dead catalog including the more complex and obscure songs like ‘New Potato Caboose’ or ‘Unbroken Chain,’ and everything from the early Pigpen era all the way to the 90’s including songs like ‘Eternity’ and ‘Days Between.'”  In addition, they also play most of the JGB catalog and a great deal of solo Weir and RatDog. That gives them such a vast reservoir to work with, which makes it so diverse, especially because they don’t ever use a setlist.

Now, If that wasn’t enough music to choose from, Pete went on to tell me that they also have two CDs worth of original songs that they play, as well as cover a wide range of other artists from the Beatles, Stones and Neil Young to Pink Floyd, Bob Marley and Donna the Buffalo. The tremendous diversity of music they draw from makes it possible for them to keep their shows fresh.  Pete again reiterated that the reason they can do this is because the shows are unscripted and unplanned. You never get the same show twice.  He said, “we decide on a set opening song, and then we go from there, and we usually come up with spontaneous segues and mashups of songs that feel right for the moment.”  To that, I say “wow, who does that?”  Crazy Fingers also doesn’t “role play,” where there is a Jerry guy or a Bob guy. Pete plays drums in the band but also sings as many Jerry songs as anyone else; he also sings Pigpen and Weir and Phil songs.

The members all choose whichever songs they want to sing as they go along.  For example, Pete said, “one night Rich Friedman, our lead guitarist might sing Sugaree, and I might sing it two shows later. It’s all up for grabs.”  Basically these guys play themselves, they don’t play the roles, and they don’t plan the sets.  This is what keeps it fresh and unique.  To me, this was really fascinating and let me tell you, this band is tight.  It is so evident that they enjoy what they do and truly are masters of their skills.  I completely agree with Pete, this is quite unique.  He said he couldn’t think of “any other GD bands in the country, including Dead and Company or even Phil & Friends, who get up there and fly without a setlist. But we do. And that’s what I love about this band.” What a special treat it was to catch up with Pete.

The Crazy Fingers Band includes: Pete Lavezzoli – drums, vocals Josh Foster – keyboards, vocals Rich Friedman – guitar, vocals Johnny Nichols guitar, vocals Bubba Newton – bass   They are truly exceptional musicians – I guess you’d have to be in order to be able to perform this way. Crazy Fingers has a regular following and that following is warm and welcoming.  They packed the place on a Sunday night.  You can clearly see by the songs performed, they really do play a wide spectrum of covers including the Dead, Dylan, Weir, Jerry Garcia, etc.

After a short set break, they were right back at it. The crowd was clearly loving the vibe, dancing and singing along.  You could clearly see the synergy between the members. …and their performance was solid. The band has a long history and has been playing in Florida since the 1990’s. Though the lineup has slightly changed over the years, the current lineup has been the long-standing group. They play weekly and tour throughout the State and South Florida. Truly a special group and fantastic sound, it’s no wonder they are known as South Florida’s Premiere Grateful Dead Tribute Band. So, to my fellow South Florida deadheads and those who don’t live in South Florida but love to visit, you don’t know what you’re missing.  If and when you are in the Sunshine State, look them up and catch a show.  You’ll be grateful you did. …and special thanks to Pete Lavezzoli for his time, words, and kindness… Follow them on Facebook

From a show in 2017 on the video page of Cheesehead Productions: