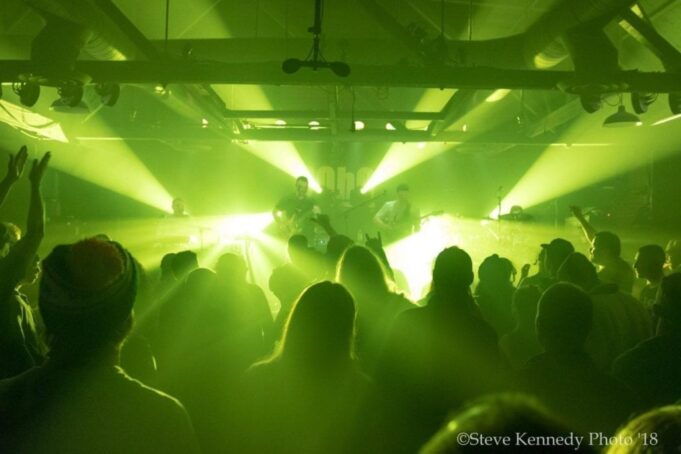 On a rainy Thursday night in Santa Barbara, Spafford took the stage at sOhO Music Venue.  The house was pretty full but not sold out. The vibe was intimate with plenty of room to get your groove on, move up close, or hang in the back and no wait at the bar for a craft brew or cocktail. The four-piece band launched into ‘Plans’ and the night was off and running. After Brian Moss ripped his first fiery solo on guitar the crowd was engaged and the band received a full-throated roar at the end of the first song.    Hailing from Arizona and playing their seond show of the band’s ‘For Your Amusement Only Tour 2018’ which has them going through the west during the spring.

Spafford has been garnering a lot of buzz around the jam scene the last several years as an up and coming band or a jam band to look out for. They feature a wide range of eclectic music, funk, jazz, reggae and prog rock among others in their catalogue. If I had to brand them I would say they have a Moe., Phish, Sound Tribe kind of vibe. They play long interludes with a strong flow and purpose born out of funky jams but using cool moods to build and develop creative grooves. I can clearly see why they would be a late night after party darling.

Check out the full gallery of photos by Steve Kennedy here.

As musicians they are clearly talented and seem to have command of their tones at will. Jordan Fairless plays bass with a smooth and crispy feeling. Cameron Laforest holds down the back beat with snappy driving precision. Red Johnson rounds out the quartet with clever keyboard work filling out a tapestry of vivid sound.

Spafford also offers solid vocals with each of the front men singing their own songs throughout the night even though there was not a lot vocal harmonizing present during the night. Although the band plays many styles of music they make it their own. It doesn’t feel forced or awkward, the flow of song choice and music genres felt organic. The jams are long but I felt engaged. The musicians use clever time changes, tempo shifts and ascending climaxes to keep the audience locked in. They were not predictable and showed the ability to take the music where they wanted to go, when they wanted to go there.

The strong musicianship and diverse jam band genres allow for a little something for everyone to enjoy. We definitely had fun and not only enjoyed the infectious grooves but they brought their own light show, yes! This aspect added a nice touch to the live experience and enhances the overall live music experience. It is nice to see a band give this element thought and investment to show of this scale, a big thumbs up to the lighting designer who added a lot to the overall vibe of the night.   It is easy to see why Spafford is gaining momentum, as a testament to their growing popularity they are showing up at many of the country’s best festivals. Among their upcoming festival dates include High Sierra, Lockn, Bonnaroo, Firefly and recently, in ten minutes, sold out the Sweetwater 420 Fest afterparty on April 20 in Atlanta.

Look out for Spafford, we will be when they come back through this area. Full show audio by Taper Troy-  use the arrows to toggle between songs.