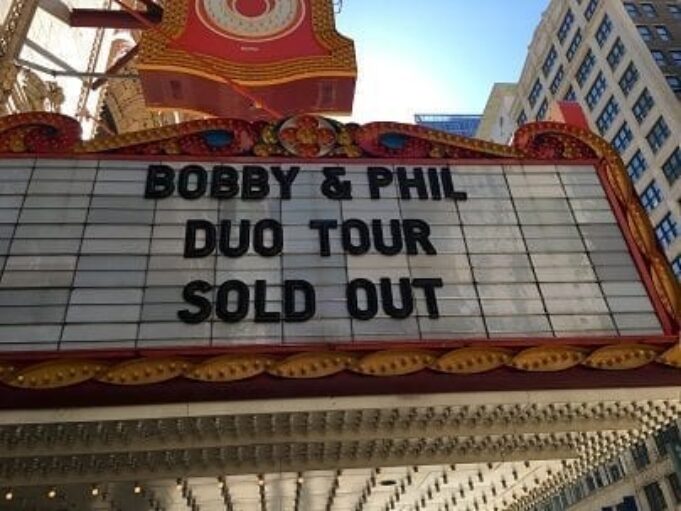 Exiting the CTA Orange Line from Midway, shaking off the last of my early morning flight tiredness, the Chicago Theater marquee, “Bobby and Phil Duo Tour Sold Out,” greeted me. Nearly three years after Phil, Bobby, Billy, and Mickey put the “Grateful Dead” to rest right down the road at Soldier Field (only to be resurrected shortly after by the latter three in Dead & Co) and after the longest break I’ve had between seeing Phil live since Jerry Garcia died and The Other Ones were born, I was looking forward to checking out Bobby and Phil’s latest project.

A veteran of many Phil and Friends shows, I was excited to be able to catch the end of this mini-tour.  Hopefully, with a few shows under their belts and the cobwebs dusted off, they’d be firing on all cylinders in Chicago.  Indeed, they did not disappoint. 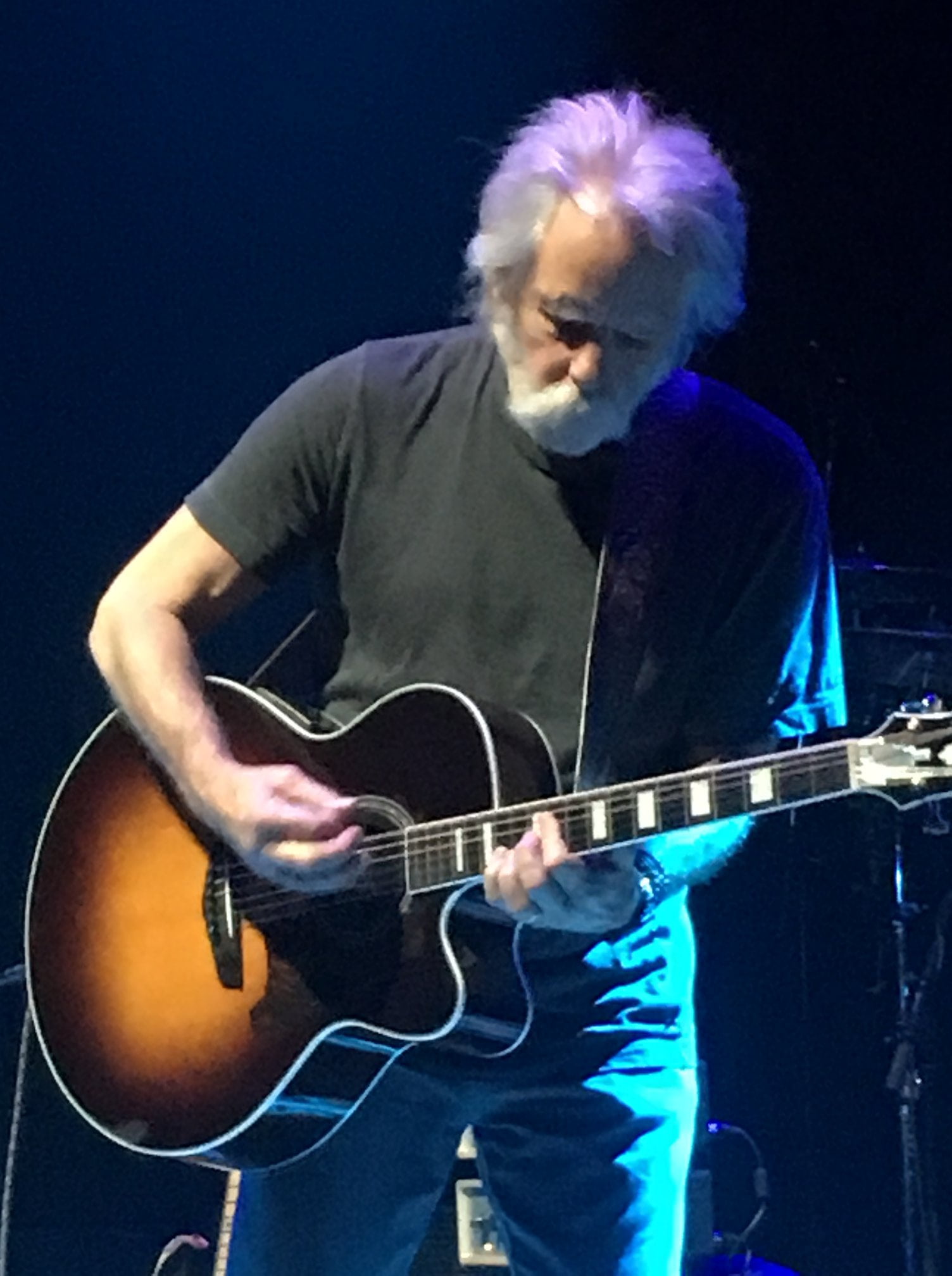 The curtain rose on night 1 to reveal, as expected from the previous four shows, Bobby on acoustic guitar, Phil on his Alembic electric bass, and Wally Ingram on percussion.  The trio kicked off the evening with the Lesh/Hunter penned Box of Rain (establishing a running “rain” theme for the evening). Ingram stepped off stage as Bobby took lead vocals on Ramble on Rose, Phil sang Cosmic Charlie, and Bobby sang Looks Like Rain (after a short story about how it was written over the phone with John Perry Barlow and Phil remembering Bobby coming over and playing it in his living room in Fairfax for the first time).

Weir switched to his electric guitar and Ingram rejoined for an interesting take on Estimated Prophet, and then the duo/acoustic guitar format returned as Phil sang the Pigpen tune, Operator. The first set ended with the electric guitar and Ingram returning for the In the Dark tune, West LA Fadeaway. Before the curtain dropped Bobby reminded us to vote, “unless maybe you’re ok with the way things are going.”

From the video channel of the Zalewski Law Firm.

Sharon Budman’s review of the NYC duo shows are here.

As the curtain rose for set 2, the duo/trio transformed into a sextet.  Multi-instrumentalist Larry Campbell and singer Teresa Williams had made the journey with Bobby and Phil from Boston, and Jeff Chimenti (now the longest tenured “Grateful Dead” keyboardist) joined on piano.  The sextet would play the entire second set together.

A very appropriate Playing in the Band kicked off set 2 with Bobby and Campbell both on acoustic guitar.  Bobby switched to his electric guitar part of the way through the song. The classic pairing, Scarlet Begonias > Fire On the Mountain followed as the band, or at least the guitarists, got more “electric” for Scarlet before Campbell switched to mandolin for Fire.  Another classic sequence, Dark Star > St Stephen followed. The rain theme reemerged as Bobby led the sextet through Bob Dylan’s, A Hard Rain’s A-Gonna Fall. A staple in Bobby’s repertoire these days, this classic has taken on a new pointedness in the recent political climate.  The tone remained heavy as Campbell switched to Cittern (a large mandolin-like instrument) and Phil sang Bird Song, replacing “her” and “she” with “him” and “he” in the later verses. The mood finally broke with the upbeat Sugar Magnolia to end the second set.

After a masterfully played set 2, Phil returned to the stage for thanks and his standard “Donor Rap.”  What followed was the only real trainwreck of the two nights, US Blues. Bobby forgot the lyrics, messed up the timing, and started singing at an odd point in Campbell’s solo.  If you’re listening to recordings of these two shows, this is the only song to skip! Setlists posted on Bobby’s Facebook show that they crossed out the original song they planned to encore with and wrote in US Blues.  While the song feels appropriate for the times, perhaps they should have stuck to the original plan.

Chatter before night #2 seemed to all agree that Set 2 from the previous night had been the highlight of the tour so far.  With three shows under their belts with Campbell and Williams the “band” was settling in and the addition of Chimenti, who at this point probably knows (or at least remembers) the tunes better than anyone, really helped tighten up the music.

From the video channel of Velvet Hammer 2002

The curtain rose to once again reveal the trio of Bobby, Phil, and Ingram.  Bobby and Phil shared vocals in a truly wonderful Cumberland Blues followed by Tennessee Jed and Alabama Getaway (seemingly starting a southern state theme).  Bobby and Phil traded off lead vocals with Loose Lucy and Lazy River Road before Ingram stepped off as Bobby sang Daniel Lanois’ The Maker (first asking the audience to let him know if anyone knew what the song was about).  Ingram returned for another southern state song, Mississippi Half Step. Bobby looked at his watch, quickly conferred with Phil, and the duo closed the set with a touching rendition of Cassidy. Bobby and Phil’s interplay in this duet was perhaps the highlight of the run.

As the piano and Campbell’s instruments were on stage during set 1, it was no surprise that the set 2 curtain raise revealed the sextet back again.  The set opened with Campbell on Cittern for Crazy Fingers followed by another highlight of the two-night stand, New Speedway Boogie (with Phil giving an approving nod as the audience finished off the final “this darkness got to give”).  Phil and Williams took the lead vocals for Mountains of the Moon followed by a unique Cryptical Envelopment > Let it Grow > The Other One > Cryptical Reprise sequence that included Campbell starting off on violin. Uncle John’s Band featured unusually tight (especially for impromptu lineups) vocal harmonies and Bobby finished up the final set of the run with the final Garcia/Hunter penned tune, Days Between.

After chasing his grandson around backstage and giving his wife, Jill, a big hug and kiss, Phil returned for one more Donor Rap and thanks. Bobby and Phil appropriately closed out this run with a duet version of Brokedown Palace.  The entire band was called out for bows before the curtain closed and the lights went up. Moments later the lights went down again, the curtain raised and Bobby and Phil took one last curtain call.

It was truly a treat to see Bobby and Phil making music together again and especially to settle in for a few shows in a row with a regular “band” behind them as opposed to just one-offs at Phil’s Terrapin Crossroads.  Wally Ingram did a masterful job of providing rhythmic support both to the duo and as it grew into a full band. Larry Campbell was a perfect choice for this more “acousticy” configuration playing different acoustic stringed instruments and adding incredibly tasteful leads and rhythm parts with his fingerpicking electric guitar style.  Terresa Williams voice fit perfectly with Bobby and Phil and added a bit of “meat” where it was needed. As already mentioned, Jeff Chimenti has become “the rock” of the Grateful Dead music world, his presence always tightening up the music with his ability to lead the band forcefully through the changes.

Particularly as a duo and trio, but even as a sextet, the musicians left plenty of room to hear what each was doing.  One is reminded that Phil and Bobby essentially learned to play their instruments playing together in the Grateful Dead and both developed styles that are unique and innovative.  The Duo Tour was a great example of just how interrelated those styles really are, how each plays off the other and avoids stepping on what the other is doing. While Bobby is usually referred to as a “rhythm” guitarist, his playing throughout this tour also reminds us that the licks he plays and the lines he constructs are as beautiful standing alone as they are as rhythmic fills.

Even as Phil approaches his 80th trip around the sun and has scaled back his touring (sort of), he remains a true force on the bass and anchor of the Grateful Dead music scene. Hearing Bobby and Phil sing together was a special treat with the harmonies on songs like Cosmic Charlie and Cumberland Blues sounding surprising tight. And as the “original members” continue to welcome and incorporate other great musicians into the fold, we’re reminded that “the future’s so bright, I gotta wear shades.”