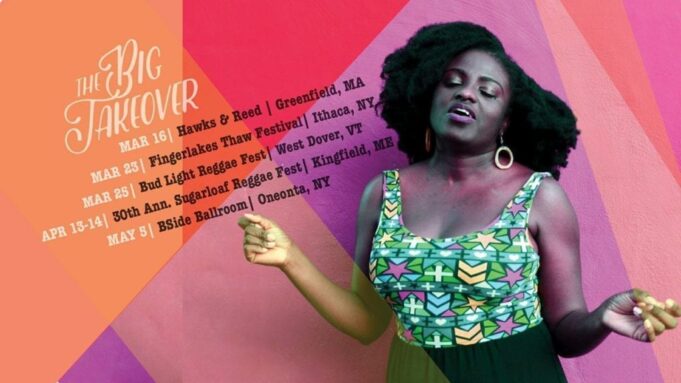 The New Paltz, NY-based outfit will headline a concert at Hawks and Reed Performing Arts Center in Greenfield, MA on Friday, March 16th. To submit a story or to just say hello, email us at [email protected]

The Big Takeover, fronted by native Jamaican NeeNee Rushie, is poised to begin a spring tour that will stretch well into May, June, and beyond. It all kicks off with a performance at Hawks and Reed Performing Arts Center in Greenfield, MA on Friday, March 16th with special guests Shokazoba. Since 2007, the New York six-piece The Big Takeover has been fulfilling the mission implied in their name: packing clubs in the city and upstate and building their brand and reputation on the road and in the studio. A far cry from the pop-punk of American ska, The Big Takeover take their cues from Desmond Dekker and the first wave of Jamaican pop music as well as from the soulful energy and sophistication of Motown. At the center of this tight, grooving ensemble is the live-wire singing and deceptively subtle songwriting of the Jamaican-born NeeNee Rushie, who makes the audience feel like accomplices more than spectators. The other members of the band are:

Batu Attila – Drums Rob Kissner – Bass Chas Montrose – Sax Kerry Shaw – Guitar Andy Vogt – Trombone Chas Montrose – Sax   Traditional and experimental, The Big Takeover’s global blend reveals deep fluency in reggae and world music, hints of soul, and a pop classicism that is their own thing entirely. In New York’s musically hopping Mid-Hudson Valley, they are only the band around that is welcomed and honored at all the major national-circuit rooms: the indie/experimental haven of BSP in Kingston, the jazz and blues gem that is the Falcon in Marlboro, the classic rock mecca of the Bearsville Theater in Woodstock- the Big Takeover packs them all. On the road, the band has played over 500 shows, sharing stages with The Original Wailers, Jefferson Starship, Eek-a-Mouse, the Slackers, and more. The band was recently selected to participate in a Converse Rubber Tracks Session in Brooklyn NY, and released their fourth full-length record, Silly Girl, at the beginning of 2017- to critical acclaim. Other tour dates for the Big Takeover include performances at the Fingerlakes Thaw Festival in Ithaca, the Bud Light Reggaefest at Mount Snow in southern Vermont, the 30th anniversary of the Sugarloaf Mountain Reggaefest in central Maine, and Froggy Daze 7 Festival in Narrowsburg, NY. Stay tuned for updates and more on their Facebook page and their website.