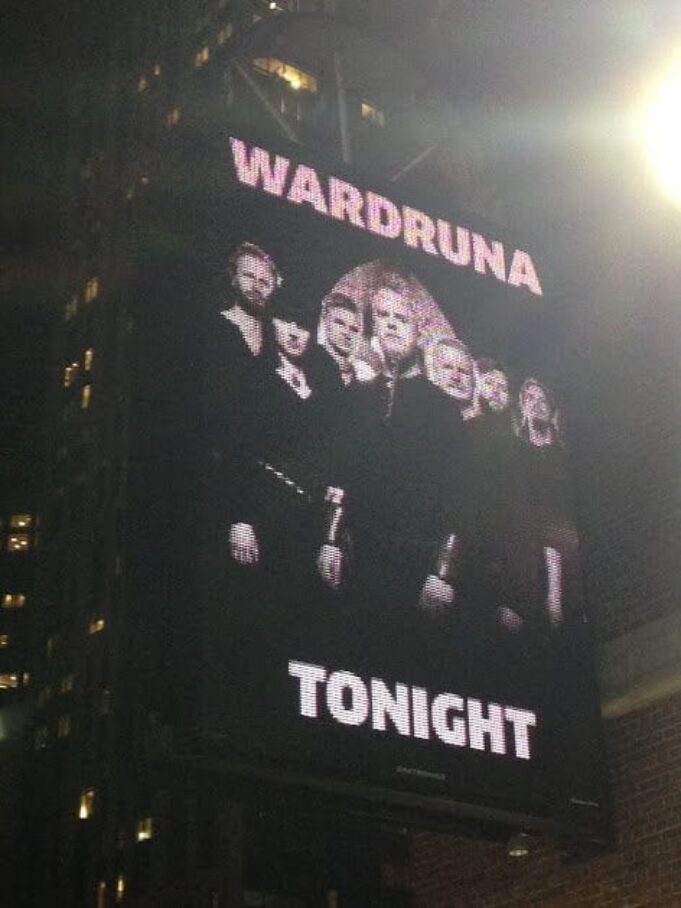 I have been interested in Northern European and Scandinavian culture since I discovered the Norse myths as a teenager some decades ago.  When I went to college in the 90s I was introduced to the music of Loreena McKennitt, Enya, and other new age & folk music that in many ways shaped my identity as much as those styles of music (jam, prog, metal) that most people associate with me.  This was a night of fresh new musical experiences using old ideas and instruments to convey a timeless message of what is essentially folk music.

This newest incarnation of neo-folk music comes from Norway and using the archaic and modern forms of the language of the North, instruments from the time period of the Vikings, interwoven with themes from the Norse myths and the magical system of the runes, Wardruna weaves a tapestry of sounds and emotions.

As I drove into Boston, I thought about the production on the albums and how they recorded much of the music in the natural soundscape of the outdoors.  I pondered about how, as a society, we rarely make music outside in communities anymore.  I was looking forward to seeing how the band was going to be able to recreate that feeling of space in the Wilbur Theater.  And I was excited to see this show, perhaps even more excited than seeing King Crimson for the first time in November.

As I had hoped, the Wilbur Theater has the perfect acoustics for Wardruna’s music. Prior to the band taking the stage, there was an interesting blue backdrop but as the evening opened and the lighting changed it was clear that it was a white piece pf cloth similar to camouflage blind material.  Throughout the evening different colored lights were projected onto it for visual effect making it look like leaves, vines, fire, water, seafoam, and

The lighting, the instruments, and the harmonies between Einar Selvik and Lindy-Fay Hella made for a magical night. At the end of the single set Einar spoke to the crowd about his music and vision.  Einar expressed that his passion for reviving the folk music of the Nordic and Viking peoples of 1000 years ago, isn’t to remain stuck in the nostalgia of the past, but as an expression of everyday life both then and now.

Music of the past, music of the folk, was sung while baking bread, reaping crops, and rowing boats.  Music and singing were woven into the everyday chores and tasks of life and Einar’s aim is to take those words and instruments and remind people of these roots of music.  His closing thought was that songs were also sung to guide the dead on their way and he begged the question as to who would sing for him when he died.   Then they closed the show with the song “Helvegen” (the Road to Hel).   It’s not easy to describe a folk music show that uses unusual acoustic instruments and sings in a foreign language.  However, it can be accessed through the emotions conveyed in the combination of the auditory and visual experiences.

Folk music is universal to the human condition and all of the activities we engage in to make life happen – to survive and thrive through blood, sweat, tears, and song. This was Wardruna’s first time in North America and I don’t think they were disappointed, I certainly wasn’t.  I can’t wait for them to make a return trip in the future.