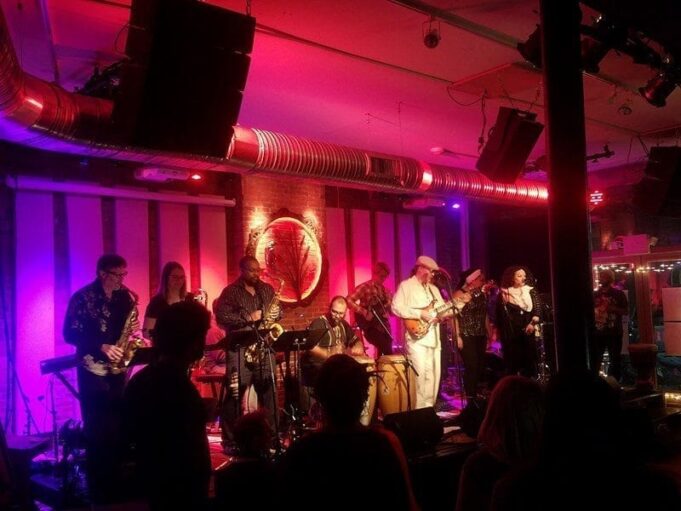 I have seen the Alchemystics countless times and could not help but notice the dapper and quietly strong character behind the percussion set with them, Matthew King.  For anyone who may have wondered what’s going on in that smiley head of his, wonder no more.  It turns out that there is a wealth of rhythm and melody, sounds and songs whose origins are birthed around the world.  Over a series of years, perhaps a lifetime, King assembled these sounds and songs into a new project that he fronts, not from the percussion set but from front and center- on guitar and voice.  This project, called Taproots made it’s premier at the Hawks and Reed performing arts center in Greenfield MA and I was excited to witness it.

Up first though was local world music purveyors Rebirth.  This was a first for me but I recognized some of the names from the local music scene.  They had a fascinating ability to mix Afrocuban and world music into a sensibility that I could only call Americana.  How do these chicken scratch guitar lines coalesce with a song about a cowboy?  I don’t know but somehow they do.  Their legitimate appropriation of world music constructs is somehow different than others in the Valley and their set was interesting, entertaining and at times joyful and at other times challenged us to think about the world around us.  They call it Soulful World Music, and I agree.  I-Shea told me that in this band they try to express that “Music is our religion.”  This is exactly what we seek out of musical art, well done. Audio of Rebirth

It would have been easy to wonder whether or not the stage at Hawks and Reed could truly contain the mass of musicianship that took the stage for Taproots‘ premier.  The ‘basic’ band was 12 strong from a 3 piece horn section to a 3 piece percussion section to singers, guitarist, bass and more.  King led the ensemble from front and center and his combination of humility, confidence and joy are radiant and impossible to ignore.  You can easily see that this is a project that is very dear to him, that it is a lifetime in the making and that the actualization of its premier is both the starting line and the finish line for him in terms of this project.  Will it ever happen again?  I hope so but just its mere existence was a joy to behold.

The band combines elements of Afrobeat, Afro-Cuban, world and electric jazz easily and deftly.  The songs have definitive direction and there is little meandering despite each song and all of the musicians having the ability to fully express themselves. The musicians?  A who’s who of the local music scene.  Jay Stanley from Max Creek and Rhythm Inc on percussion, Dave Noonan on drums (every band ever in Greenfield area, currently his own band Green Island), Ilana Morris (Alchemystics) on vocals joined by I-Shea, Dan Thomas (so many bands, Llama, the Mary Jane Jones, etc) on guitar, Kat Rapacki on trombone (The MJJ), Chris Ball (The MJJ, Alchemystics, Medicinal Purpose) on bass, Yahuba on percussion (Ryan Montbleau, Percy Hill),  and many others.  Those are only the folks who I was able to identify just by having seen them before and off the top of my head.

The sounds?  Somewhere between Miles Davis electric era,  Abraxis era Santana and Sun Ra Arkestra.  Those who are more versed in the wide world of world music could more accurately describe it likely but each song had its own definitive sound and style without attempting to be all world music at once in each song.  The direction and focus are quite refined. Like with other great world music, the music was accompanied by quality lyrics that described struggle, redemption and purpose.  Overall this was an amazing show and I applaud King for his ability to bring a project of this size and scope to the stage. Audio of Taproots

What is it about Greenfield and the Pioneer Valley in general?  Over the last several years a preponderance of large bands has come to the fore.  Llama Lasagne and Rodd Cummings blazed the way, ensembles that varied in their personnel and stretched from one edge of the stage to the other.  These cover focused projects, gave way to more original music focused projects with huge ensembles.  More recently Dave Noonan’s Green Island showed how his background of reggae ska and world music could be all combined into an amazing dance party.  Taproots effectively added themselves via King’s superb direction to the pantheon of fascinating groups that seem to form and execute on a moment’s notice when in actuality a lifetime’s worth of education and attention are required to birth such an ambitious musical adventure.

To get in touch with Taproots, hit them up at [email protected]