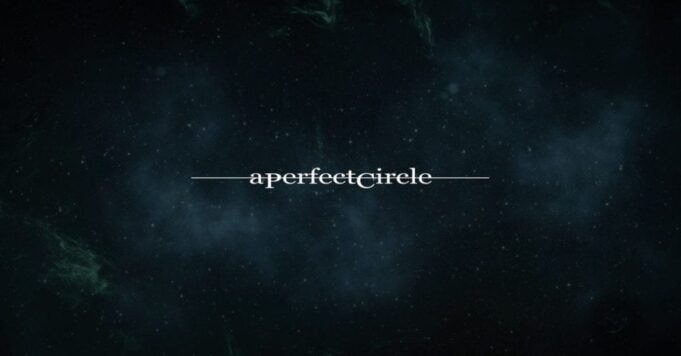 A Perfect Circle with The Beta Machine

It’s certainly an odd feeling to hear the frontman of a band talk about their album from 2004, calling it “politically-charged,” and to realize that we’re probably worse off now, as we wind down 2017, than we were then. It’s like we not only didn’t learn from history’s mistakes, we blew off the class entirely.

A Perfect Circle performed a classy blend of hard-driving melodic metal with revolutionary overtones at the Mohegan Sun Arena on a misty Sunday evening. They brought the Beta Machine along with them as an opening act and it’s safe to say I have a new favorite band. Their ambient electro-rock reminded me quite a bit of Maynard James Keenan’s other side project Puscifer, so it didn’t at all surprise me when he introduced APC’s drummer Jeff Friedl and bassist Matt McJunkins as members of both Puscifer and the Beta Machine.

After the first song, I stood up and used the empty row as my personal dance floor. . . Quickly realizing I was the only one in a crowd of a thousand who was out of her seat and moving. Quite a surreal experience. I couldn’t help it, however; their beats were simply too hypnotizing to sit down and passively take it all in. (I also wanted to stay awake, after coming down from a wild weekend where ingesting mass quantities of caffeine could only do so much.) The vocals of frontwoman Claire Acey reminded me a little of Portishead’s Beth Gibbons, another band I dig. All in all, I can’t wait to check them out more. The Beta Machine only played a 30-minute set, which was too short in my opinion- I was seriously getting my groove on. But after a half-hour intermission, A Perfect Circle took to the stage behind a shimmery gigantic curtain. I could see MJK’s slight frame behind the gossamer, and he appeared to be wearing a big blond wig, perhaps in the style of Lady Gaga. Because Maynard. After the first song, Thirteenth Step‘s “The Package,” the curtain fell to the floor in a dramatic BANG. The band careened their way through their catalog as I admired the stage setup. Drummer Friedl, singer Keenan, and bassist James Iha were on circular platforms at the back of the stage that sported colorful LED displays (that at times glitched out).

Glittery stalactites descended from the rafters and changed color depending on the stage lights. Often, the APC “parentheses” logo flashed on a huge screen behind the band. Billy Howerdel thrashed around, with his fans on the floor following suit. From my companion’s and my vantage point in the lower bowl, stage left, it was a treat to see all the folks screaming along and headbanging with fervor. Maynard James Keenan is a man of few words, but he makes what he does say count. He had this to say before breaking into the haunting APC version of John Lennon’s “Imagine”:

It reminded me of the Green Day concert I saw in March: how American Idiot was released pretty much as a “fuck you” to George W. Bush and how Emotive, APC’s cover album, seemed to be much the same. It also brought up the fact that GWB’s presidential atrocities now seem almost quaint in hindsight considering what a trainwreck this current administration has been over the past ten months. They also covered “(What’s So Funny ‘Bout) Peace, Love, and Understanding” and also performed their original “Counting Bodies Like Sheep to the Rhythm of the War Drums” off of the same album towards the end of the night. All entirely by design- the band has obviously never shied away from being overtly humanist in their political views.

From the YouTube channel of Jan Pilanski from the Reading, PA show:

The concert effects continued to impress me- dry ice, strobe lights, Howerdel and Keenan trading vocals. I wish I had been able to stand up and properly rock out (a recurring theme in my reviews, it appears) but I bobbed my head and foot as best I could whilst sitting down. Security was super strict, too, about photo-taking- even during the last song “Feathers” a fan was ejected for taking pics.

However, having seen Puscifer four times in 2015 and 2016 and Tool earlier this year, this policy was not surprising to me. I remarked to my companion that A Perfect Circle was a good balance between Tool and Puscifer- the two bands I knew of more, concerning Keenan’s prolificacy. I also mentioned how pleased I was that within two years I had been able to cross a concert bucket list item off my list- see all three of Maynard James Keenan’s bands live. Hopefully by the next time I see any one of Keenan’s three projects, the political tides will have turned, history won’t feel as if it’s heading down a more desolate road, and the shows will feel more like celebrations instead of protests.

16. Counting Bodies Like Sheep to the Rhythm of the War Drums