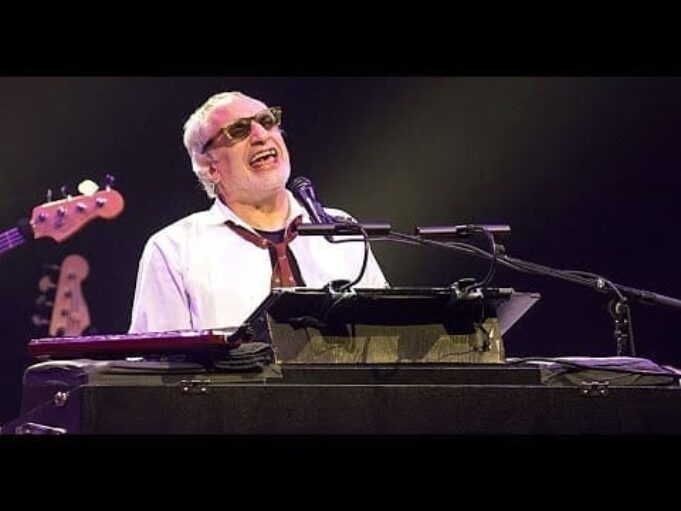 I am writing to review and reflect upon Steely Dan who released their first album Can’t Buy a Thrill 45 years ago on November 2. We recently lost Walter Becker on 9/3/2017. This made me quite sad but drove me back to the LPs of Steely Dan for much listening.  Walter’s lyrics and guitar solos are ever so vivid.

Nobody can replace Walter. The heavy rollers are still rolling heavy. Pancake day has come and gone and the house that Walter and Donald built still stands. The band had energy. Donald said to us in the audience, “Y’all are crazy!” Well thanks Donald, y’all are crazy too!

Some of the highlights were “Black Friday” from Katy Lied. The Danettes, the backup singers Carolyn Leonhart, Cindy Mizelle, and LaTanya Hall sang “Dirty Work” from Can’t Buy a Thrill. They sounded poignant and delivered with passion. Donald said, “Here’s a song we don’t do often: ‘Don’t Take Me Alive.'”

They played Aja, a highlight of the band both in the studio and live. On record Wayne Shorter blows sax, while Steve Gadd is on the skins playing the greatest of drumming recorded in the studio. Live, Walt Weiskoff plays the sax solo and Keith Carlock plays the drums. Keith Carlock really is one of the greatest drummers in the world, as was noted by one of the Danettes, LaTanya Hall during introductions at the show. It really is excellent music and I credit the band as soloists and players.

Donald was giving credit to the band members. He exclaimed, “That was Jon Herington on guitar!” He said, “By the way, that was Jim Beard on keyboards on ‘Book of Liars’!” Donald said, “It sure feels weird being up here without my partner.” There was no phoning it in.

The show started at 7:30 pm with no opening act. The show was over by 9:30 pm Sunday night which was perfect for me because I had to drive back to Brooklyn, NY, the same place Donald and Walter moved after they left Bard College in Annandale-on-Hudson, New York in 1969.

The band had Roger Rosenburg on Baritone Sax, Walt Weiskoff on tenor Sax, Michael Leonhart on trumpet, Jim Pugh on Slide Trombone, Freddy Washington on bass, Keith Carlock on drums, Donald Fagen on Keytar, keyboards and vocals, Jon Herington on guitars, Jim Beard on keyboards, and the beloved Danettes. There was a fabulous drum solo at the end of “Reelin’ In the Years” by Keith Carlock. Jon Herington has a lot of guitar styles to play, playing in the style of Elliot Randall, Larry Carlton, and Jeff “Skunk” Baxter- but the most difficult to play is Walter Becker himself. Who can play Walter’s solo like Walter did on Black Friday? Billy Gibbons!

Donald sang two songs from his first solo album, The Nightfly: “Green Flower Street” and “New Frontier.” That was cool to see. Donald was fresh off his tour of Donald Fagen and the Nightflyers where he brought out these gems! I was just a kid living in Connecticut when I was 9 years old and my Dad got me into Steely Dan when Aja came out. Aja was the third record I ever bought in 1978. Now I stand to own the oldest record shop in Park Slope, Brooklyn , Fifth Ave. Record Shop in the same neighborhood that Donald and Walter moved to in 1969. Yes, the store was open then too.

Now, a third generation from my family checks out Steely Dan as my 12 year old daughter was in attendance and saw her first Steely Dan show in Wallingford. By the way TV Babies is a term Donald uses in his autobiography Eminent Hipsters. It is the idea of those who are babysat and taught by their tvs. Thanks Donald for 45 years of music. How cool that you found so many great players to play with both on LP and live!

I recently saw Steely Dan saxophonist Roger Rosenburg play a tribute to John Coltrane on Coltrane’s birthday on Sept. 23rd at the Cutting Room, in New York City along with my friends Joan and Maria. It was top notch. These Steely Dan musicians are the finest musicians.  It is just as it says on the back of the first Steely Dan album, Can’t Buy A Thrill: Steely Dan, it’s growing. The band is still growing and playing great. Yes, they undermine the current pop scene. Hey, but this is jazz rock! I had to take my time with this Steely Dan review because you don’t rush Steely Dan music.