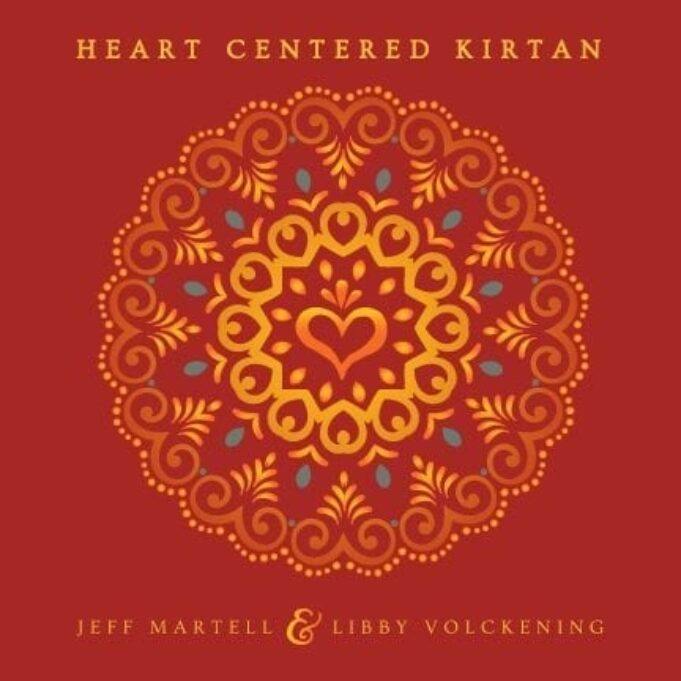 Heart Centered Kirtan Debut Album To Be Celebrated On Saturday Story by Cheli Mennella To submit a review or story for consideration hit us at [email protected] Check out the Live Music News and Review.com Facebook page for updates and announcements. When a random stranger called to ask about singing at her yoga studio, Libby Volckening welcomed the idea. She didn’t know Jeff Martell at the time, a veteran singer-songwriter, who had been playing the regional music circuit for decades and who was, for many years, a driving force behind the success of the Green River Music Festival. He had recently turned on to kirtan, devotional call-and-response singing, and was seeking venues to play. Rooted in an ancient form of yoga called Bhakti, or the yoga of devotion, kirtan uses Sanskrit chants, prayers, and mantras as a way to cut through the noise of daily life and connect to the Divine.

Volckening was already familiar with kirtan and had been working with mantras for many years, but hadn’t thought of hosting a kirtan at her Green River Yoga studio until Martell called that autumn of 2013. It was a fortuitous twist of fate. For little did Volckening realize that this stranger would become one of her best friends and this call would herald the beginning of her journey into heart centered kirtan. Martell played a couple gigs at Volckening’s studio, accompanied by his guitar and another singer. When he and his singer parted ways, Libby offered to be his respondent. Martell was willing to take a chance. “It was the first time I ever had a microphone in front of my face. It was so overwhelming,” Volckening admitted. “But Jeff smiled and he was encouraging and nobody yanked me off the stage. And afterwards he gave me a big hug and said, ‘Let’s do it again!'” And suddenly, Volckening and Martell were kirtan cohorts. They traded books, attended other kirtans together, and developed a close friendship and easy musical partnership. Volckening added a harmonium to the mix, and then one day the first chant she ever taught herself suddenly turned into a song. “I got pulled by the heart to the piano and it was really scary because I had never felt possessed like that before,” she said, describing the experience. That song, Om Asatoma, was sung at their next kirtan and became the opening for more of Volckening’s songs to be born. The duo gigged a couple times a month, weaving mantras into original music with rock, reggae, and jazz infusions. “We got to the place that was telepathic. We had a deep connection very quickly,” Volckening said. “When Jeff and I sang together there was this place where we would meet each other. It was spare and spacious and open, and it was just us singing. So that’s part of the magic for me, to be able to drop into that space.” Right around the time they both turned 50, they tossed around the idea of doing a kirtan album together, as a bucket list sort of thing. And by the fall of 2015, they were taping at Northfire Recording Studio in Amherst. Just a few months into that recording, Martell, ever the travelling bard, was on his way to a gig, when a speeding driver crashed into his car. Martell, a bright, charismatic, and talented musician who had been at work on a number of creative projects, did not survive. His death stunned the Western Massachusetts music community. Volckening was devastated. In the brevity of their friendship, Martell had become like a brother to her. Overwhelmed by grief, she struggled with the decision of whether or not to continue the album. But with the memory of Martell’s voice in her head and the touch of his hand on her shoulder, she decided to carry on.

She described the process as “a life preserver.” “It was really sad and really hard,” she said. “But it gave me a purpose, to wake up in the morning and just keep showing up. It was helpful with the grief and it was a way to make my connection to him last.” They had recorded scratch takes of everything, so all the songs had Martell’s voice on them. But it was the engineering wizardry of Northfire Recording Studio’s Garrett Sawyer that allowed the project to grow and come to fruition. Sawyer’s gifted and intelligent ear for sound, his intuitive sense for creating music, and his magic at the controls were integral in producing a fully-realized album. A handful of area musicians provided instrumentation on bass, electric guitar, drums, piano, organ, percussion, trombone, flute, and harmonies. And embedded off-the-cuff clips of Martell and Volckening speaking and laughing add a personal and deeply meaningful component to the album. As does Martell on harmonica. Volckening panicked that they had lost this vital piece because it had not come through in some of the roughs. But Martell’s harmonic offerings were found and brought to life in a couple of tunes. “It was really important to have his harmonica playing on the album,” she said, “because that’s Jeff’s breath. To hear him breathing – that means a lot to me.” After months of work and moving from grief to growth, their debut album Heart Centered Kirtan is finally finished. It is a poignant tribute to Jeff Martell and the special joy that he and Volckening shared singing kirtan together. The songs are comprised of Sanskrit chants and mantras set to original compositions. They explore a range of emotions and praise the divine spark which connects us all. The album opens with Martell’s invocation to, “Sing all the time!” His rich, textured voice sings Om Namah Shivaya, an accessible chant, made even more welcoming by his warm tone and the rocking upbeat tempo. Govinda Gopala Narayana conveys the call-and-response nature of kirtan and the chemistry between Martell and Volckening, while Bhagavan Kripalu is a joyful, jazzy chant which honors the light in everyone. There is a lyrical ode to Saint Cecilia, who sang her heart out to God and a bluesy chant about the goddess, Kali, which carries some thunder. Om Asatoma, the first song Volckening ever wrote, is a prayer that asks to “lead me from lies to truth, from darkness to light, from death to eternal life.” The emotionally resonant tune Ishvara Pranidhana weaves mantra with the chorus, “Let it go.” Martell’s tenure as a singer-songwriter shines through in this tender melody that shows how the power of kirtan can open the heart.

Mahamrtyunjaya Mantra, sometimes called a death-defying mantra, is a complex chant with a beseeching quality to it, amplified by electric guitar, drums and bass, which give the song an edge. It is followed by the redemptive tune, Purnam Adah. The album closes with Martell saying, “Don’t let me get lost,” and segues into acoustic guitar and the wistful notes of the South Indian flute. And then Martell sings praises to Saraswati, the goddess of knowledge, music, and the arts. His is the only voice on the song, which was a deliberate choice Volckening made during the recording process. “One night I had to teach and Jeff had gone to the studio ahead of me to record, but when I got there I was too tired to sing,” she explained. “And then he passed away. And I decided not to record my voice on that song. So it’s just Jeff. I let him have the last word.” Volckening will celebrate the release of Heart Centered Kirtan at the Hawks & Reed Performing Arts Center in Greenfield, MA, on Saturday, November 4, at 7 pm. She will be accompanied by James Robinson (Trailer Park) on guitar and vox; Garrett Sawyer (The Gaslight Tinkers) on bass; Dave Noonan (Dave Noonan’s Green Island) on drum kit; Melissa Stevens on vox; and special guests Brian DiMartino (Rhythm, Inc., rice: an American Band) on electric guitar; and Andy Soles (Rocky Hill Revival, Smack My Bishop) on harmonica. For more information about the album, translations of the chants, and kirtan schedule, visit www.heartcenteredkirtan.com. Tickets at www.hawksandreed.com. To submit a review or story for consideration hit us at [email protected] Check out the Live Music News and Review.com Facebook page for updates and announcements.