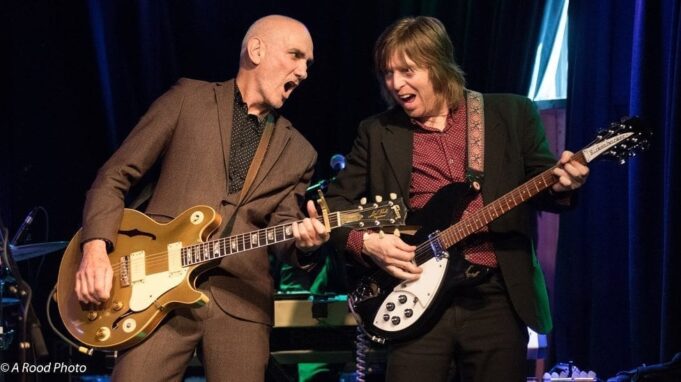 Paul Kelly made his triumphant return to Southern California stages debuting his new album Life is Fine at The Federal in NoHo and The Roxy on the Sunset Strip. It didn’t take long for him to connect with the audience.  This was unique experience where Paul played a free brunch show at the Federal earlier that day and then the main show at the Roxy that night.

The concerts began with “Rising Moon,” a seemingly prophetic tune exploring the mystery of mortality and transition. The first half of the set was a full performance of his album concluding with the title track “Life is Fine.”

Kelly also played songs from his earlier releases which got the audience singing along with him. The surprise of the show was background vocalist Vika Bull taking the lead on “My Man’s Got a Cold,” written by Paul Kelly.

Check out the full gallery of photos by Stevo Rood here.

Undoubtedly, the band represented some of Australia’s best musicians. The grueling five-week tour of North America should win them a new legion of loyal fans. It is rare when a performer sings songs with clarity and poetic depth energized by scorching lead and acoustic guitars.

This being the last show before the return trip to Australia, they played for almost two hours. There were definitely smiles on everyone’s face tonight… Opening the show was Jessie Cornelius, a lass from New Zealand whose voice was soft and sensual…

Long May You Run, Paul Kelly!

Paul Kelly has recorded over 21 studio albums as well as several film soundtracks (Lantana and the Cannes 2006 highlight Jindabyne) and two live albums, in an influential career spanning more than thirty years. He was inducted into the ARIA Hall of Fame in 1997.

Songs From The South, a selection of his popular songs first assembled in 1997 and expanded to a double album in 2008, contains many of his songs now lodged deep in the Australian psyche.

He continues to cross musical boundaries. The triple j tribute album Before Too Long, released in 2010, featuring John Butler, Missy Higgins, Megan Washington, Paul Dempsey, Ozi Batla, and many others is evidence of his influence on generations of musicians.

His first work of prose, How To Make Gravy, a self-described “mongrel memoir,” was published in 2010 with Penguin and is accompanied by a CD box set of live recordings and an audio book with readings from Paul and some of Australia’s finest actors Cate Blanchett, Russell Crowe, Hugh Jackman, Judy Davis and Ben Mendelsohn.

The book, the audio book and the A-Z recordings now make up a unique app. An app which in Paul’s words is “the closest thing to how I imagined the book to be – something that sings and talks and plays.”