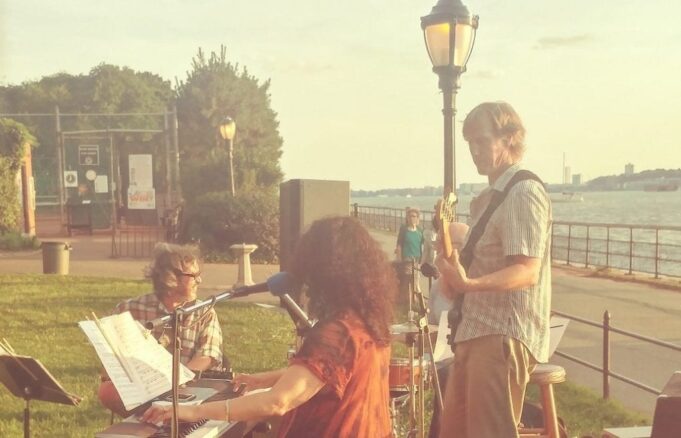 Check out the Live Music News and Review.com Facebook page.

Debbie Deane and her band played the RCTA Sunset Blues and Pop Riverside Park at 97th St. on the Upper West Side of Manhattan, on Sunday evening, July 2, 2017. Debbie plays jazz, blues, and rock and roll. Debbie Deane is from Brooklyn, NY. She was raised in Brooklyn. She attended Harvard University in Cambridge, MA and then went to Berklee College of Music in Boston, MA at the same time as Kurt Rosenwinkel and Bruce Arkin. She was one of only ten ladies who were enrolled.

Debbie plays gigs as well as teaches piano. She is musically quite excellent.  You need to hear her! Her band consisted of Jim Whitney, her husband, on bass, Diego Voglino on drums and Sean Moran on guitar. Debbie is known for playing with top musicians. The show was two sets on the Hudson River. It was a beautiful, sunny Sunday night.

Her first set included Debbie’s original music. She played “Grove House” from her second cd. She covered two Steely Dan songs in the show, “Any Major Dude” from Pretzel Logic and “Green Earrings” in the second set from The Royal Scam.  She can sing well and that she did.

Debbie has a beautiful voice. She is my favorite female vocalist. She is also a good friend.

Debbie is a musician. Jim Whitney is a talented bassist from New Hampshire of whom Paul McCartney of the Beatles and Tom Hamilton of Aerosmith have seen perform. Jim released his first jazz album as a leader in 2016, called Dodecahedron. Check it out!

Diego the drummer is a Brooklyn drummer who plays drums for the local jazz scene. He gathered a scene around Tues Day Night Jazz jams at the now defunct Fifth Estate on Fifth Ave. in Brooklyn. Diego says the scene still continues at Halyard’s in Brooklyn. Diego recently also played a gig with Jason Newsted at the McKittrick Hotel in Manhattan. Newsted was the bassist for Metallica. Scott Moran plays guitar and he was nailing the licks of Larry Carlton.

Debbie and her band played “Whipping Post” by the Allman Brothers as a moving tribute to the late Gregg Allman. He recently died recently on May 27, 2017. Debbie and her band are musicians’ musicians. I told my friend Philip Shimmel, a former drummer with Dr. John about the show and the plan to write this review. He said it should be called, “Why isn’t Debbie Deane Famous?” She is simply great. I was thinking while watching her performance that I prefer hearing her music than more well known bands.

The music is not pretentious and everyone is a great musician. On her CDs, she has had such players as Brian Blade, who played with Joni Mitchell. Joshua Redman, and Wayne Krantz who has played with Donald Fagen and with Steely Dan. Debbie has the groovy vibe. She even spent time on tour with the Grateful Dead Circa 1984. She played “I Can See Clearly Now,” the Johnny Nash song, too.

Debbie has been on stage at the Blue Note in New York, NY all the way to the Blue Note in Tokyo, Japan. She also has played at Local 61 in Brooklyn, the 55 Bar in Manhattan, The Society for Ethics in Brooklyn, The Greenwoodstock Festival and is a co-founder of the PS130 Music Festival in Brooklyn with John Montagna and Bennet Paster. She also performs on guitar for young children at Greenwood Playground in Brooklyn. Debbie Deane has consistently entertained her audiences at her live gigs. I recommend her two CDs: Hit the Rewind and her second, Grove House. My favorite song is “Finally Free” from her first album. My favorite from Grove House is the song “Yesterday.” Oh, do I love that song! Debbie released Grove House on Ravi Coltrane’s label. Ravi is the son of John Coltrane. What more can I say? Check her out live. Get her CDs!

In summary, there is this Jewish Brooklyn lady born and raised in Brooklyn who has been playing some of the best music on the New York scene for decades named Debbie Deane. She is super kind and a great player. She plays grand piano and Wurlitzer keyboards. She Knows music, educated at Berklee College of music in the early 90’s; and she should be heard. Enjoy summer and try to catch a show by my friend Debbie Deane! I know I will! Thank you Debbie Deane!

Check out the Live Music News and Review.com Facebook page.