My birthday was Thursday, April 13th and to begin my 43rd year on this Earth two of my best friends took me out dancing to a place new to me: Metropolis in Brattleboro, VT.  It was Funk Night with the Metropolis All-Stars – Nate Martel on guitar and vocals, Elliot New on the bass, Ted Sullivan on the drums, and special guest Brother Sal Maffettone on guitar and vocals.  Angel, Sue and I were clearly outnumbered by the men in the crowd, but that didn’t stop us from dancing!

The band played a lot of funk and blues covers including Led Zeppelin, Rolling Stones, Jimi Hendrix, and a dirty gritty “Sweet Leaf” by Black Sabbath.  These guys clearly love to have fun and every couple of weeks like to hold a theme night.  They told me a few weeks ago they had a metal night which was a huge success and drew a crowd that doesn’t usually attend shows that feature blues, funk and rock with a little “jam” spread on top and in between the verses.

Friday night I went to Bishop’s, again just with Angel, to see one of my favorite bands – rice: An American Band.  Phil Simon, my good friend, owner/booking agent at Simon Says Booking, managing editor here at Live Music News and Review, is also the founder and frontman for the band.  He also is not influencing me in any way to promote his band.  I genuinely like their sound and vibe.  I even joke that Angel may be his wife, but I am rice’s biggest fan. 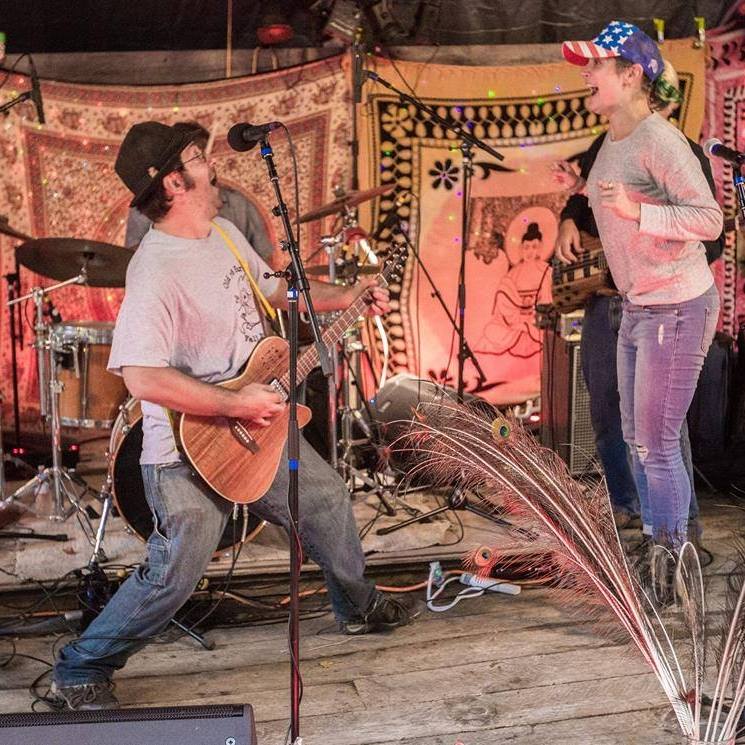 Their songs are easy and fun to dance to, the lyrics are infectious, and no matter how the line-up of musicians changes, they are a tight-playing group that likes to have fun. Many of the songs that rice plays are 20-year-old gems from when Phil was with the band Freaks of Nature.  Played today, they are still timeless and don’t “sound” their age.  They also have some new material by the incomparable singer Courtney Parker, and the band’s founding guitarist Brian DeMartino and a song Phil wrote for his wife called “Just a Name.”  Their covers are also on point.  This night’s version of “Comfortably Numb” kicked it up a notch over the last Bishop’s play they had performed it.

Saturday was by far the most fun I had had all weekend!   This time my friend Krystal came out to dance with me to Outer Stylie.  We arrived to catch the opener Unconscious Disturbance in the middle of their set.  This band from New York City was a refreshing change from the usual bands I see locally.  They were definitely more metal and proggie with a little punk thrown in.

It was great!  (I am, after all, first and foremost a prog rock whore.) I got a chance to talk to Kiko Freiberg (guitar/vocals), Daniel Freiberg (drums/vocals), and Tim Haggerty (guitar) (Danny Dahan plays bass, but was not present) out on the balcony about their set, gig swapping with Outer Stylie, and the announcement during their set to rename the band “Added Color.”  I think that the new name is keeping more with their sound. Unconscious Disturbance sounds too much like a death metal band.

Next, Outer Stylie took the stage, made up of Nate Martel, Monte Arnstam, John Duffy, and Tom Schack.  Now, I have lived and seen live music in the Valley for many years, but shockingly enough I had never caught a whole Stylie show.  Sure, I’ve seen a song or two at StrangeCreek or Wormtown, but they have never had my full attention for a whole show, until now.  And OMGs, I was not disappointed!

These guys definitely have a lot of psychedelic rock influence to their sound, especially when they have a guest musician in Darby Wolf on Hammond Organ.  Many of the songs played during the evening had elements of Yes and ELP as well as some old-fashioned headbanging metal.  “Addicted” is one song which I have heard before and I really love dancing to it, too.  I also had the pleasure of hearing “Sweet Leaf” again and if I said that Thursday night’s version was heavy and dirty, then Saturday night’s rendition was filthy.  This is such a talented band and I was especially impressed with the man behind the kit, Monte.  It was so much fun to watch him play.

All in all, this was a birthday weekend to remember.  I will definitely catch Funk Night at Metropolis again and keep my eyes open for the next area play for Added Color.  As for rice and Outer Stylie, I hope to see both these bands sooner rather than later.  It’s almost a guarantee that I’ll catch their sets at this year’s StrangeCreek.