The release of Gov’t Mule’s first studio album in four years will coincide with the band’s newly-announced “Revolution Come… Revolution Go” Tour this summer with special guest Galactic. This will follow the band’s previously-announced Come What May Tour this spring, which will include a headlining show at Central Park SummerStage on May 17 in New York City. Full routing below for all upcoming dates. For ticket info, please visit www.Mule.net.

Exemplified by the duality of the two lead single- the walloping, aggressive guitar riffs of “Stone Cold Rage” and the simmering, soulful grooves of “Sarah, Surrender”- Revolution Come… Revolution Go is a thrilling musical journey and Gov’t Mule’s mos 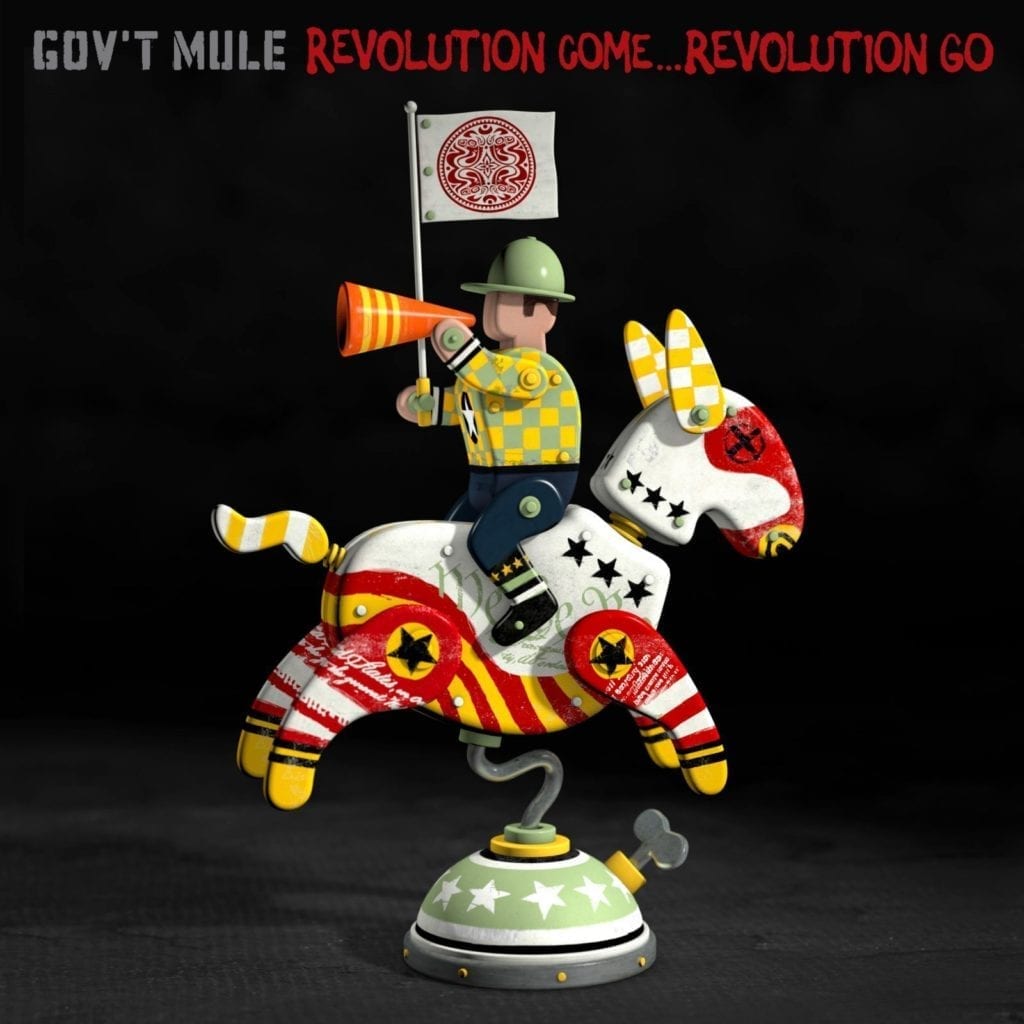 t diverse album to date. The group began recording the album in Austin, TX, on Election Day in November 2016, with half the country poised for upset no matter the outcome. It is a sentiment that is evident on songs like “Stone Cold Rage,” “Pressure Under Fire” and the title track. While Gov’t Mule’s storytelling has always been inspired in part by American struggles and experiences, Revolution Come… Revolution Go finds the band’s finger on the pulse of the very divided political climate, poignantly capturing the tension and emotions felt by Americans regardless of political affiliation. These lyrical observations are threaded together with a message of unity. The album’s cover art speaks to this theme. Created by artist Richard Borge, it displays a soldier atop a broken toy mule facing the wrong way as he yells through an orange street cone. “It’s that same idea,” explains Haynes, referring to the country’s current state of affairs. “The character is yelling to nobody and facing backwards. It makes you think.”

While there are some political observations on Revolution Come… Revolution Go, there are also introspective ruminations on life and love like the countrified road song “Traveling Tune,” the soaring “The Man I Want To Be” and the slow-burning, reflective “Easy Times.” Throughout the record, Haynes’ dynamic vocals sound as strong and rich as ever, swinging effortlessly between rock ‘n’ roll grit and soulful crooning. Longtime collaborator Gordie Johnson joined Haynes as co-producer for six tunes, while the legendary Don Was co-produced on the powerful and moving “Dreams & Songs” and the thought-provoking “Pressure Under Fire.” Jimmie Vaughan makes a sizzling cameo on the super-charged “Burning Point.” “Dark Was The Night, Cold Was The Ground” is the reworking of the traditional blues instrumental originally recorded by Blind Willie Johnson to which Haynes added lyrics and the band turned into an epic gospel rock closer.

Gov’t Mule – Haynes, Matt Abts (drums), Danny Louis (keyboards, guitar, and backing vocals), and Jorgen Carlsson (bass) – has galvanized a global fan base with their music and improvisational virtuosity, leading them to be recognized as one of the most timeless, revered and active bands in the world whose spot amongst rock titans remains unshakable.

Check out Steve Kennedy’s LMNR review of Warren Haynes’ and Don Was’ #LastWaltz40 event at the Orpheum in LA: