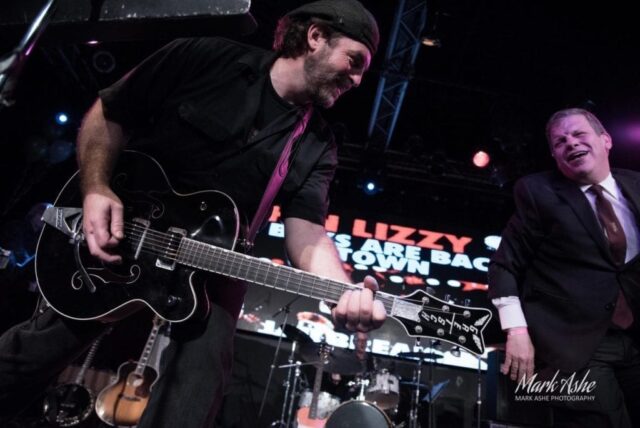 Joe Hurley’s Annual Irish All Star Rock Revue made a triumphant return to New York City on Saturday night. Hurley and his band of Irish and non-Irish all stars performed at Highline Ballroom, singing everything from Irish ballads to hard driving rock hits. Among the Guest Stars were Garland Jeffreys, Ellen Foley, Michael Cerveris, Dennis Dunaway and Al Bouchard.

Starting out the evening was a stirring acapella version of Danny Boy by Mary Lee Kortes. Sherryl Marshall got the ballroom moving with a rocking version of U2s Pride in the Name of Love. Don Fleming belted out the Thin Lizzy song Are You Ready. John S. Hall sang a great version of Elvis Costello’s (Angels Wanna Wear My) Red Shoes. Then, Avon Faire, Jahn Xavier, James Noone Blythe Gruda, Gaz Thomas and Tish & Snooky each gave first-rate performances.

Tricia Scotti playing acoustic guitar performed a moving version of U2s Stuck In A Moment. Edward Rogers rocked the house with Teenage Kicks by The Undertones. Ellen Foley of Meat Loaf fame sang a riveting version of Sinead O’Connor’s Nothing Compares 2U. Joe Hurley performed an emotional version of The Pogues Thousands Are Sailing. Local New York City favorite Richard Dev Green performed a crowd pleaser with Van Morrison’s Caravan. One of the big names of the evening, Garland Jeffreys performed his original song Wild in the Streets. After the song he was
reminiscing about how he and Van Morrison were ripped off by people he trusted in the music business. Maybe not reminiscing, but definitely some words of fortitude for future musicians. Next out Joe Hurley and The All-Star Irish Rock Revue Band played three Joe Hurley and Rogue March songs. They were On My Way Home, Amsterdam Mistress and the boisterous Shut Up And Drink.

One highlight of the evening had to be Dolores “LaLa” Brooks of The Crystals. LaLa was the lead singer of the Crystals and she hasn’t lost anything from those Phil Spector days. LaLa proudly hasn’t had any plastic surgery as she told the audience a story about her and Cher. Cher’s assistant told LaLa that Cher isn’t going to like it that LaLa hasn’t paid for any plastic surgery as LaLa proudly showed off her 69 year-old body to the audience. LaLa sang U2s StreetsHave No Name and The Crystal’s Da Doo Ron Ron to the delight of the audience.

Another of the main highlights of the show was I’m Eighteen performed by Dennis Dunaway on bass a member of the Rock and Roll Hall of Fame band Alice Cooper and Al Bouchard of Blue Öyster Cult on lead guitar with Hurley on vocals. Together the performers became a mini super group on stage while playing the Alice Copper song that Dunaway wrote.

Michael Cerveris, the two-time Tony award winner and television star sang Thin Lizzy’s Boys Are Back, which was so good, it sounded like Thin Lizzy were performing the song. Cerveris came back later for a duet with Hurley performing People Who Died, which was a memorial to all of the music people who recently died.

Handsome Dick Manitoba of the Rock and Roll Hall of Fame “Punk Wing” group, The Dictators gave a rousing version of Them’s Gloria. He said to forget all other versions of Gloria, “The version sung by Van Morrison of Them Is The Best, period!”

Rounding out the show was a duet by Hurley and Gerard McNamee with a spirited version of Irish Rover recorded by The Pogues among others. The set lasted for over three hours with 36 songs performed. Joe Hurley’s Annual Irish All Star Rock Revue is just a fun rollicking show to see. If you are ever in New York during March around St. Patrick’s Day, you should definitely add this show to
your to do list. 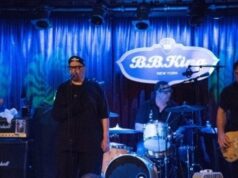