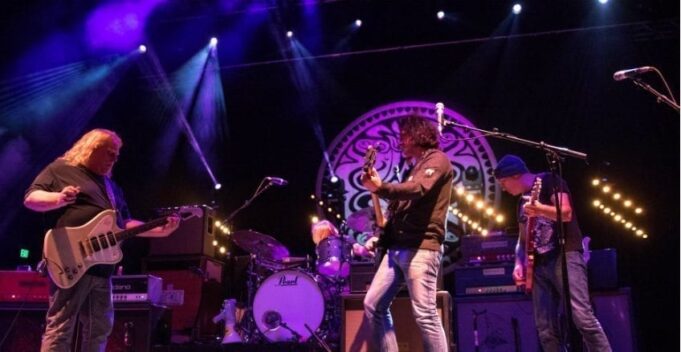 For the full album of amazing photography of this show, visit our facebook page for the gallery.

Blackberry Smoke made a stop in Paso Robles, CA to play the Vina Robles Amphitheater as part of the Smokin’ Mule tour ’16. They opened for Gov’t. Mule and delivered an energetic blues and rock filled set. The group based out of Goergia and fronted by vocalist and lead guitar player Charlie Starr endulged the early arriving crowd with an array of heavy blues riff and deep roots southern fried jamming.

As the set built momentum, the Central California folks began to connect and the energy of the evening began to take off. Some of the highlights of their set included Fire in the Hole, RnR Again, and acoustic version of Ain’t Got the Blues, some strong cover of Black Sabbath’s Fairies Wear Boots and Led Zeppelin’s Sleeping Dogs also Ain’t Much Left to close the set. Charle Starr played a wide array of Gibson guitars including an SG, Telecaster, 345 and Les Paul’s. Blackberry Smoke set the tone for the rocking night that was to be.

Gov’t Mule came next, a rare appearance by the band and Warren Haynes to these parts located approximately half way between L.A. and the S.F. Bay area.  The Paso Robles wine country makes for a gentle rural setting with warm evenings and rolling vistas. The Smokin’ Mule Tour as it affectionately referred to made for a perfect show within this beautiful setting.

After a great warm up set by Blackberry Smoke, it was time for the much anticipated Gov’t Mule to own the stage. They kicked off the show with World Boss and never looked back. The set was filled with covers from the Band, Bob Marley, Bob Dylan, Creedance Clearwater Revival, 2 Led Zeppelin songs, and Bob Seger. One of the highlights, in a night filled with them, was a guest appearance by Toshi Yanagi who helped jam out some inspired rhythm and leads during the song Sco-Mule. Another great highlight was the encore with Charlie Starr who stuck around to sit in as a featured guest. They played Bob Dylan’s It Takes a Lot to Laugh It Takes a Train to Cry – this song seemed to strike a harmonious chord with the Mule faithful.

Finally the band closed the show with Bob Seger’s Ramblin’ Gamblin Man. This was Gov’t Mule’s debut of this tune and was played with passion and energy. They swung into a brief but beautiful jam of Mississippi Queen that featured Warren Haynes playing the heavy power cords while Charlie Starr jammed out the signature licks.

Warren Haynes proved why he is revered as one of the great blues rocks guitar players in the country. His ability to command his guitars, Gibsons mainly and especially his Les Paul, with a wide array of clean tones and raunchy thick chops it is a testament to his love of the music. He is a master of taking a lead and building it, developing an intensity and style that gives the song its voice. Taking it somewhere, taking into your veins and pumping in to your heart and soul.

It’s always refreshing to see a man with immense talent remain true to the roots of his music, to be sincere and humble yet honest with his musical convictions. He screamed the blues through his amps at times soft and weeping and other times big and strong like a monster with an axe. His dedication to playing hundreds of shows every year, collaborating with many artists and connecting with his crowds is a true delight.

On a Sunday night in rural Central California on a warm summer evening it could be easy for many bands to just mail it in, take the night off, maybe just breeze through while heading to sexy venues in the S.F. Bay and L.A. but not Gov’t Mule! They laid down a top to bottom two and a half hour set that was completely satisfying and left many saying it was the show of the year at Vina and “We must never miss a Sunday show.” So here is a tip of the cap to Warren Haynes and Gov’t. Mule and to Charlie Starr and Blackberry Smoke for not only stopping in Central California but delivering the goods!

For the full album of amazing photography of this show, visit our facebook page for the gallery.