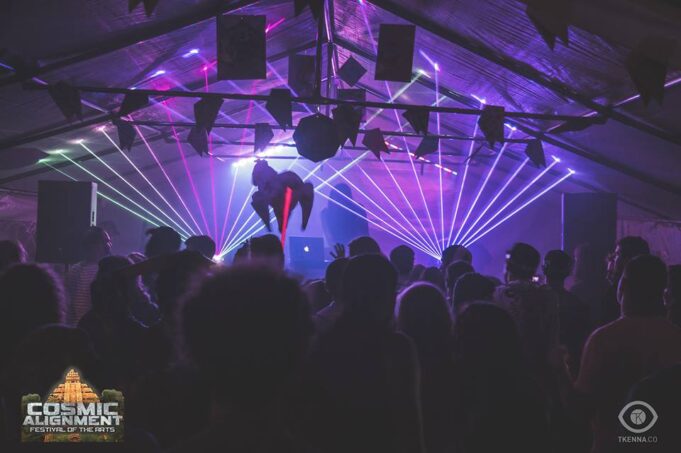 The organizers of the festival are “Cosmal and Ali Laz”, very cool peeps who did an excellent job of pulling things together in their 4th CA festival. In addition to organizing the event, Cosmal is an EDM DJ, who adds layers to his sonic creations with guitar, and processed vocals, while Ali Laz paints a complete work of art onstage during the set. The duo graced the festivals stages for Friday and Saturday performances.

I’m not 100% sure what the best industry terminology was for the kind of music prevalent at the festival. Trance Music, Psybient Music, Tech House, Jamtronica were all represented at the event. To paint the scene, many of the music acts feature a person (or two) at a big mixing board, triggering prerecorded music sequences, heavily embellished with looping effects, overlays, and other weirdness, centered around monster grooves. There also seemed to be a heavy reliance on “Super Bass.” However, I found myself being far more entertained by the bands with instruments, and for those acts, I preferred to be watching the stage. My favorites of the festival were: The Last Superstar, Consider the Source, Psymbionic, Cosmal & Ali Laz, and of course, Shpongle!

Being a follower of Shpongle, this festival came on my radar screen a few months back. And although I wasn’t familiar with most of the musical acts, with Shpongle on the bill, I knew the rest of ’em would be similarly “out there”.  And as a lover of strange music, I was sold! This festival also had a little bit more of the “awareness” element to it, with a long list of interactive workshops (Yoga, Kung Fu, Hula Hooping, etc)….not normally what I chase after but it gave the festival character. 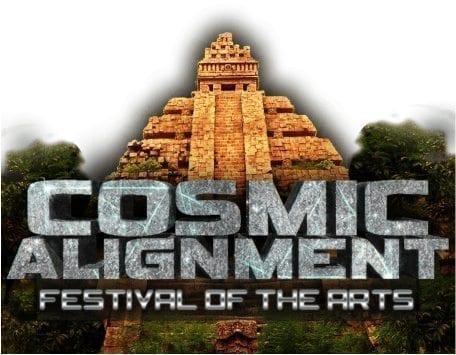 I opted to be a “volunteer”, which meant free admission in exchange for two 6 hour shifts. I’d also get a staff T shirt, 2 meal tickets. When I go to a festival solo, I’ve found that volunteering is really a win-win-win situation all around. It’s a good way to quickly feel more connected to the scene.  And I love the idea of supporting small grassroots festivals.

On a more self-serving note, I like having some sort of purpose, and a huge advantage is the staffers get taken care of pretty well, sometimes rivaling VIP status. Every festival-provided meal avoids an hour long ordeal back at the campsite, and it’s also a fast track to making a few new friends.

During my explorations around the grounds, I saw a couple of carpenter’s frantically working under the gun in the dark to build the mainstage! Feeling their struggle, I jumped in as a carpenter’s assistant and tried my hardest to stay one step ahead of the workers.  My volunteer shifts were satisfied as “setup crew” by Friday afternoon, and I was in pure party mode after that…just about when the music was getting underway, and it couldn’t have worked out any more perfectly! I pity the poor folks tasked with tearing that thing down on Sunday though. Yikes! That stage was NOT built to be torn down, it was built to last thru the next ice age!

And as the sun set there was no shortage of entertainment thanks to the fire performers. Everywhere I turned, there was something artistic to feast my eyes on. Lots of whimsical art decorations in the vendor village that was packed with art that seemed to be a cut above.

Eventually, Shpongle’s set came along. A Simon Posford DJ set accompanied by a wild projection light show. (Not the Shpongletron though). I found it interesting to compare other artists with similar equipment to Simon. Most people can’t hold a candle to him. His performances are just hands down, full-on psychedelic weirdness in all its glory.

The Blue Mountain Campground served us well too.   A cozy little campground not far from Hunter Mt. that had everything needed for a successful festival. Although there was plenty of portojohns around and plenty of water spigots here and there, my only minor complaint is that they locked up the building with the showers and flush toilets. Having done my research on the campground, knowing it had bathroom facilities took me by surprise.  Fortunately I roll prepared and was able to self-support my hygiene needs with my truck side shower.

My final consensus of Cosmic Alignment is that the large group of attendees (I estimate 400 people) brought an immense amount of positive energy. It felt like a secret party where only the cool people were invited.   Smiling, happy people working hard to have a really good time! The energy was infectious. If you walked away from that festival feeling depressed, you were doing something wrong.    It was really a magical, beautiful event. Did I actually get “Cosmically Aligned”? I’d like to believe I did!