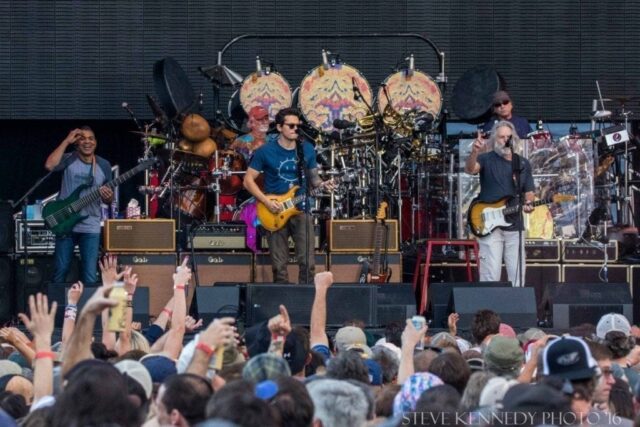 For a full gallery of photos from this show, check out the album here:

The Dead & Co. brought their magic to the mile high state of Colorado. They booked the picturesque setting of Folsom Field in Boulder with the Flatirons and Colorado Rockies looming in the background.

The band kicked off day one the 4th of July weekend with on stage fireworks of their own. Fan favorite ‘Bertha’ got things really moving followed by ‘Good Lovin’ which set the tone for the weekend ahead. Everybody loves a goodsing along and ‘Tennessee Jed’ fit the bill, “cause there ain’t no place I’d rather be”.

One of the highlights of the set was ‘Cold Rain and Snow’ with the trio of Mayer, Burbridge and Chimenti fueling the jam. In an emotional moment Bob Weir dedicated Ratdog’s ‘Even So’ to the late Rob Wasserman, Bobby’s longtime friend and collaborator who recently passed away. The first set rolled on with the unifying tune of ‘Uncle John’s Band’ just as the sun was beginning to set over the Rockies Mountains in the western sky. The boys closed the first set just like they started it, with a rocker, ‘One More Saturday Night’.

Even though 25,000 or so folks came to see the show the atmosphere was relaxed and the venue did not seem to be overly crowded. After a lengthy set break the second set kicked off when Dead & Co. cracked open a ‘Scarlet Begonias’ and lit the matches to ‘Fire on the Mountain’. Fire featured sweet jams by Oteil transitioning to Jeff Chimenti and back to the hard charging John Mayer.

A rousing version of ‘Saint of Circumstance’ lead the set into the triumphant unraveling of ‘Terrapin Station’. The drums in Boulder were explosive as Billy and Mickey took the night into a new direction. They had the Rockies quaking with the ability to fill so much space with their extraordinary sound. After ‘Drums>Space’ Bobby lead the band into a stirring rendition of ‘Stella Blue’. John Mayer blues influence could be heard giving the dramatic depth that it so richly deserves with Bob Weir commanding the stage like an elder statesman. They used Stella Blue as a launching pad into ‘Throwing Stones’ and wrapped up a great show with the classic sing along, ‘Not Fade Away’. The first night encore was ‘Black Muddy River’ sung by John Mayer which the Dead & Co. recently introduced into their set lists. Smiles were abound as night one was scribed into the books.

Night two of the Dead & Co. Boulder run got popping with ‘Feel Like a Stranger’ into a fun version of ‘Next Time You See Me’. ‘Samson and Delilah’, a Sunday staple and gentle reminder to never miss a Sunday show, heated things up and had the band shooting fireworks once again. The boys showed their ability to play tight and sharp as they smoked out a ‘West L.A. Fadeaway’ which nicely transitioned into a beautiful ‘Birdsong’. ‘New Speedway Boogie’ closed the six song first set with Bobby singing “spent a little time on the mountain, spent a little time on the hill” which seemed fitting for the incredible setting everyone was enjoying.

Second set got jumping with the much anticipated ‘China Cat Sunflower’ into ‘I Know You Rider’ affectionately know as China>Rider.  The crowd passionately sang along to “I’d shine my light through the cool Colorado rain” the energy was now explosive as the band swung into ‘He’s Gone’ and then ‘Smokestack Lighting’. This melody of songs is another place John Mayer could shine using his blues tones to help support Weir’s smokey growls. After the He’s Gone>Smokestack jam they flowed into a sweet ‘Let It Grow’.

Oteil Burbridge and Jeff Chimenti were finding nice grooves as they went into another sterling session of ‘Drums>Space’. With Mars centered clearly in the Southern sky, looking down as if it were overseeing an orchestra of color and sound ‘Dark Star’ emerged from space. After a riveting jam the boys dropped a monumental ‘Morning Dew’. For many this may have been the highlight of the show

and the weekend in general. The full power of the band could be realized as they pushed the music into an explosive stratosphere, with Bobby laying down the ever poignant, “I guess it doesn’t matter anyway!”. The encore featured ‘Brokedown Palace’ a sweet simple tune to rock your soul. This was a fitting tribute to cap off an incredible weekend of music but leave it to the Dead & Co. to throw in a twist, just as Brokedown was ending they flat busted into the 4th of July classic, ‘U.S. Blues’. Which in many respects seemed more fitting of a closer.  U.S. Blues represented the independence and free will of the band young and old and their talent by coming together and closing the weekend the same way they started it, by waving that flag, wave it wide and high!

For a full gallery of photos from this show, check out the album here: