by Jeff Rabin of the band Stackabones

I had a great time at the Steve Winwood/Steely Dan show on Sunday July 3, at the BB&T Pavilion in Camden. The venue is a large outdoor performing arts amphitheater that transforms into a smaller enclosed venue in the winter. It hosts talents of all different musical backgrounds, talents, and interest groups so there’s typically a full audience for any given show.

As it goes, Steve Windwood burst into prominence in the music scene in 1963 with the Spencer Davis Group and since then has continued working as a composer, vocalist, and multi-instrumentalist with an impressive catalog of popular music. 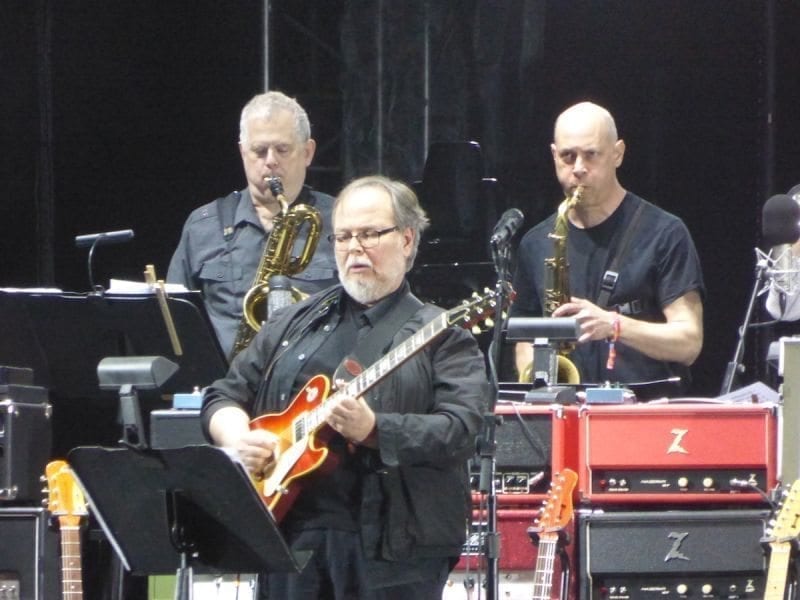 In addition to his many achievements as a solo artist, Windwood remains in high demand for special collaborations with other artists – like Steely Dan, thus their July 3rd performance was born.

Steely Dan is an American jazz-rock band whose music blends elements of funk R&B and pop. The group originated in 1972 through the efforts of core members Walter Becker and Donald Fagen. In fact, Rolling Stone has called 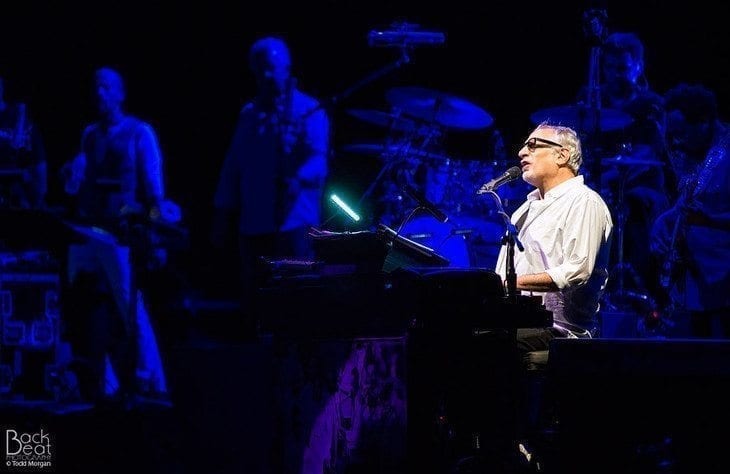 them “the perfect musical antiheros for the Seventies.”

Anyways, it was kind of weird being at a “normal” rock concert, after attending one Dead & Co. and two Phish shows within the last week…there was a tailgate scene, but not like at a jamband show.  And people sat throughout the entire concert, whereas I’m used to standing and dancing during shows.  It was a cool breezy evening on the lawn, but we had the best lawn seat location and had a hassle-free time outdoors.  Unfortunately they did not have their act together re: screens…they showed a simple full stage shot on all the screens during Winwood, but during Steely the indoor screens were blank and the outdoor screens showed just the full stage shot, with no closeups during solos.

What a night of hearing all-time great rock songs!  Winwood’s band was solid, opening with “I’m A Man,” then the Traffic classic “Pearly Queen.”  They played “Can’t Find My Way Home,” “Them Changes” (the Buddy Miles song popularized by Hendrix), “Low Spark of High Heeled Boys,” “Higher Love,” “Dear Mr. Fantasy,” and closed with Winwood’s hit from his Spencer Davis Band days, “Gimme Some Lovin’.”  What a singer, what a keyboardist, what a guitarist, what a songwriter…totally deserving of the couple of standing ovations he received.

From the video channel of Jeff Hitzel

Steely Dan was also amazing.  With a six piece horn section and three singers, this was like a full r&b-style review.  The band played an instrumental intro before the principal bandmembers hit the stage (and ended the encore with an instrumental coda).

Walter Becker did most of the talking during the show, introducing songs and musicians.  He was more of a stoner-goofball than I would have guessed.  Donald Fagan’s voice has, unfortunately, seen better days, and the chick singers did some sixties-type girl-band numbers between songs just to give Fagan a break. Every now and then his old nasally jazz vocals came through, which was great to hear.  Instrumentally, this was one of the hottest bands.  Jon Herrington has been with them for decades now, and is an incredible lead guitarist.  Becker is a pretty decent soloist, too… and each of the horn players got brief opportunities to show off their stuff.  And the drummer was incredible.  This was a very jazz-like show  (as was Winwood’s set).

From the video channel of beatles1000

(Don’t quote me on the order of songs):  They opened with Black Cow, then Deacon Blues and Aja (an unbelievable version).  They played everything:  “Kid Charlemagne,” a super-speed “Bodhisatva,” “Black Friday,” “Hey 19” (with an overlong Becker shpiel leading up to the “Cuervo Gold” section), “Las Vegas” (Lost Wages?), “My Old School”, “Josie,” “Peg,” “Do It Again” and closed with “Reeling In The Years.”  I didn’t recognize the encore, but it was a rockin’, soulful end to the setlist.  What an unbelievable repertoire, performed by such a tightly rehearsed band.

My next concert adventure:  McCartney on 7/12.