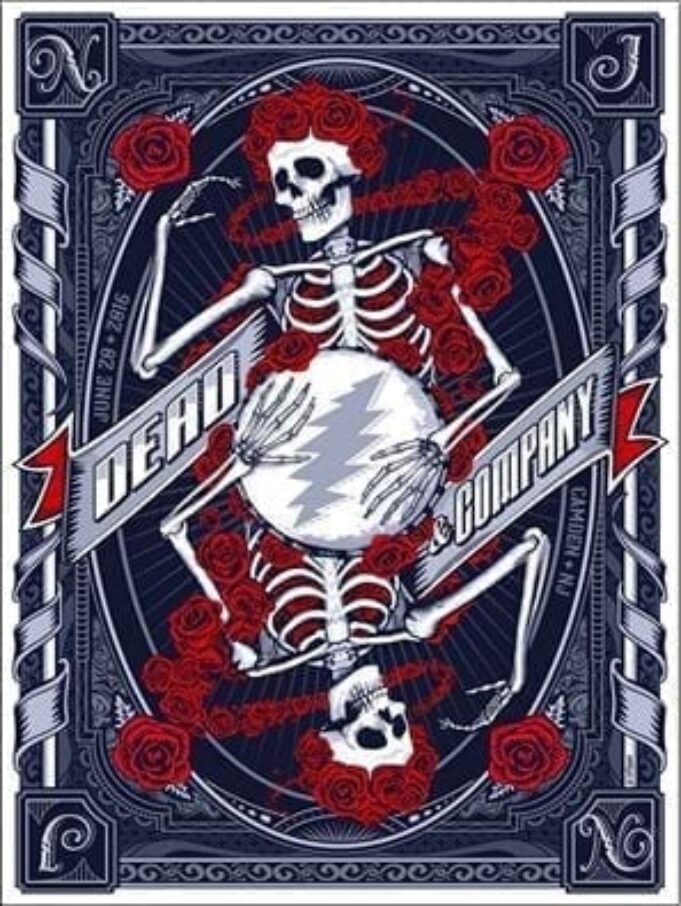 So, I’ve only been to this venue one other time, about 6 years ago to see Phish. I went with the same friend as tonight, and we both agreed the sound in 2010 was god-awful, under the roof, stage left, next to some corrugated metal wall with the sound bouncing off of it in a real bad way. Not tonight for Dead and Co., center section, 8 rows in front of the sound board, great sound and great view with three massive video screens, one of which the Dead & Co is touring with as their backdrop.

As you know, John Mayer has taken over Garcia duties, and rounding out  ” The Company” is Jeff Chimenti on Keys and Oteil Burbidge on Bass.

Before I get to John Mayer, Jeff has been playing keys with each incarnation of the Grateful Dead musicians since 1997, which would make him the longest tenured keyboard player with 19 years, as the other keyboard players that were official Grateful Dead members only had 11 years at the longest stretch.  Did you know Jeff. C. started his career on tour playing samples with “En Vogue” in the early 1990’s?

I know very little about Oteil, (other than his participation with  Allman Brother’s and founding member of Aquarium Rescue Unit) but I did read that Mike Gordon of Phish was originally offered the job for Dead & Co. and turned it down.  Oteil certainly holds down his own, seems affable on stage, playing with ease and an oversized six string fretless bass.  God bless the sound man that doesn’t turn up the bass to overpower the other musicians.

On to John Mayer, of all the Garcia replacements, including Trey Anastasio, I think John Mayer is the best of the bunch. What made me smile all night is that John Mayer, obviously a guitar virtuoso from birth, was being pushed right to his maximum level of skill. He plays and sings harmonies magnificently and you can see he’s not quite comfortable yet with the whole Dead and Co. operation , which justifies what a heavy lift that can certainly be; and to me is a tribute to Garcia’s skill level and body of work.

Bobby on the other hand appears to have fully transitioned into the soul of the band, I noticed that last year when I saw them playing at MSG on the slower ballads and tonight on Morning Dew.

Tonight’s show was more of what I call a toe-tapper show, (except for Watchtower) every time the band really starts cooking, Bobby pulls the big red break lever on that locomotive to slow things down two steps. That’s fine for a Monday night show at a non descript, corporate named summer shed, when the playing is stellar and the sound is great. We were treated to the best dessert, Acoustic Ripple Encore.  Now on to the massive big lights and big stage of CitiField  in NYC Next weekend, all primed and ready to go!

I Need a Miracle

Playing in the Band

Standing on the Moon

All Along the Watchtower