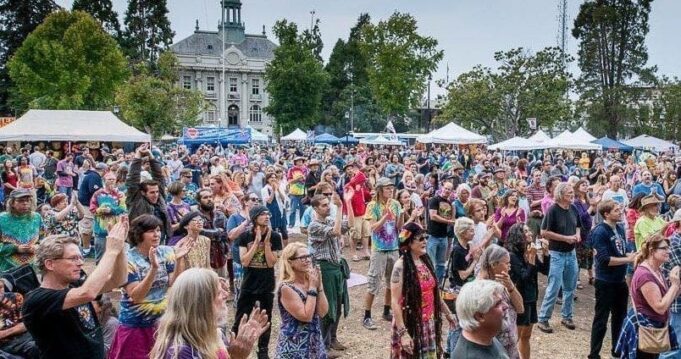 This festival is possible because of Nomad Presents, a music and events company, in cooperation with the SEVA FOUNDATION, CBCBerkeley, BPG, KPFA Radio, Ashkenaz, Lagunitas Brewing Co, The UC Theatre, Berkeley Community Media, SFGate, Smell the Truth, and The Downtown Berkeley Business Association.

A select variety of food vendors will have non-alcoholic beverages available along with veg and non-veg options. Volunteers will be serving Lagunitas Brewery on tap ($2.50 of every beer will go to SEVA).  More than 30+ vendors are expected at the Grateful Arts & Crafts Village will also have handmade arts, apparel, glass art, jewelry, healing arts, antiques, patches, pins, batik, tie dyes and more.

Located in the heart of Berkeley, surrounded by a vibrant community of artists and freethinkers and a short walk from the beautiful UC Berkeley Campus, Downtown Berkeley BART, Telegraph Avenue and The Gourmet Ghetto, the event offers both entertainment and convenience.

The lineup will include:

Rock, americana, blues band, Achilles Wheel, will also be showcasing their talent at the upcoming festival. In the wake of their breakout performance at the 2012 Kate Wolf Music Festival, the band has been burning up stages all across California ever since. Members include; Jonny “Mojo” Flores (guitar and vocals), Paul Kamm (guitar and vocals), Mark McCartney (drums and vocals), and Shelby Snow (bass and vocals).

Grateful Dead tribute band, Hardly Deadly, famous for incorporating their own elements of blues, jazz, country and fold music, will be performing at the festival this September. The group was formed in Stockton, California in 2013 by singer / guitarist Dan Murphy, bassist Wristband Scott, and keyboardist Joe Bulum. In 2014, the trio added guitarist Stanley Raquel, and drummer Gregory Skelton. In September 2014, Justin Anderson was added to the team as the second drummer.

Other bands performing at the event include: Easy Wind, Wake of the Dead (Chico), Lucy Arnell, T.V Mike and the Scarecrowes.

Berkeley Shakedown Street Festival is a free family friendly event that benefits The SEVA Foundation, a nonprofit company that works tirelessly against avoidable blindness, specifically in indigenous and marginalized areas of the world.

Fans from past years have exclaimed that the Berkeley Shakedown Festival “is exactly what Berkeley and the Dead community needs,” adding “there should be more events like this.”