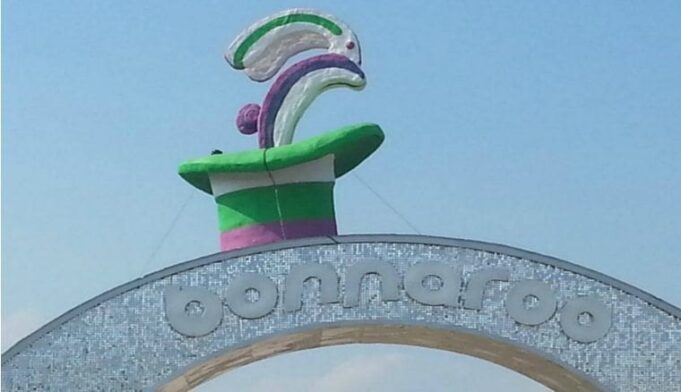 I had arrived on Thursday from my one thousand plus mile solo drive, got my wristband, hotel room, and a huge meal.  I planned to rest up after the long drive and hit the festival early on Friday.  I was able to do that pretty easily with almost no traffic whatsoever pulling into the festival.  I got a parking / camping pass at the main parking gate, cruised in and met the people parked around me.  I grabbed the stuff I would need for the weekend, as much as I could carry, and headed into the grounds.  I met up with my buds in artist camping, got situated, game planned, hydrated, and wandered into Centeroo.

The first music we saw was at The Who Stage, Henry Wagons.  He is a fun loving Aussie with a band producing a fun drunken sound, a mix of rock and americana and blues.  I only caught the last song, Willie Nelson, which was an ode to the man himself, and Wagons got off the stage and into the crowd, leading everyone in the raucous vocals,  “Willie..  Willie..  Willie Nelson!”  Why?  I don’t know, but it was fun.

I wandered to one of the tents for the first time for Rayland Baxter.  Someone I met said that he was real good, so I figured…  And by the way, tent is not actually the right word.  It’s more of a pavillion with a big festival stage, massive production, and room for probably a few thousand people underneath a very high roof, open sides, and really infinite capacity with people around the outside.  Baxter played a great set, full of blues, soul and rock and roll – a slow cooked musical meal that unfurled stories that dripped with humidity and dank sensuality.  And yes, there were trucker hats.

Baxter grew up in Nashville listening to the sounds of his father’s pedal steel, as he was a touring and session musician.

Though the sounds were typically Nashville, Baxter grew up wanting to be a rocker, and he’s achieved that for sure.  Audio of the whole set is below:

From there, I went to the main stage where the band St Lucia was playing.  I knew nothing about them aside from that they are on a lot of schedules I have seen lately.  Dubstep?  Reggae?  World music?  The band started and I learned that they are none of those things.  They are a synthpop band through and through.  They clearly are popular, as the field was packed with pop-loving fans.  They were tight, with lots of drums and keys and a lead singer in command of his songs and his pop craft.

They strongly remind me of George Michael.  And I don’t mean that negatively necessarily.  Where you can hear in George Michael the echo of the soul music he must have loved growing up, St Lucia grew up and are strongly influenced by George Michael it seems.  You can really hear it, as if they are the band-child of George Michael and or Wham.  Full audio is below:

It was wicked hot on the main field , with no shade really.  It was the first day though, so I was still feeling mighty.  I wandered back to the tent and caught about fifteen minutes of Kamasi Washington.  This was a full on funk and jazz band, powering some jams with strength  and dexterity.  Lots of horns, and a strong rhythm section.  The band is lead by Washington who plays saxophone and there was plenty to like.  I only caught about fifteen minutes, but I was not sad as I knew he would be returning to anchor the Saturday night super jam.  But I had somewhere to be.  As I was walking to my next destination I could hear Kamasi introducing a special guest on saxophone, his father- and Kamasi indicated that his father taught not only him, but everyone he knew how to play music.  This is clearly a family affair.

Lucius was about to take the stage at THIS TENT (not just a tent but THIS TENT, as it is named.)  I have been listening Lucius for a few years and I was very much anticipating this set.   They came out and fired off one of the best 60 minute shows I have seen ever. 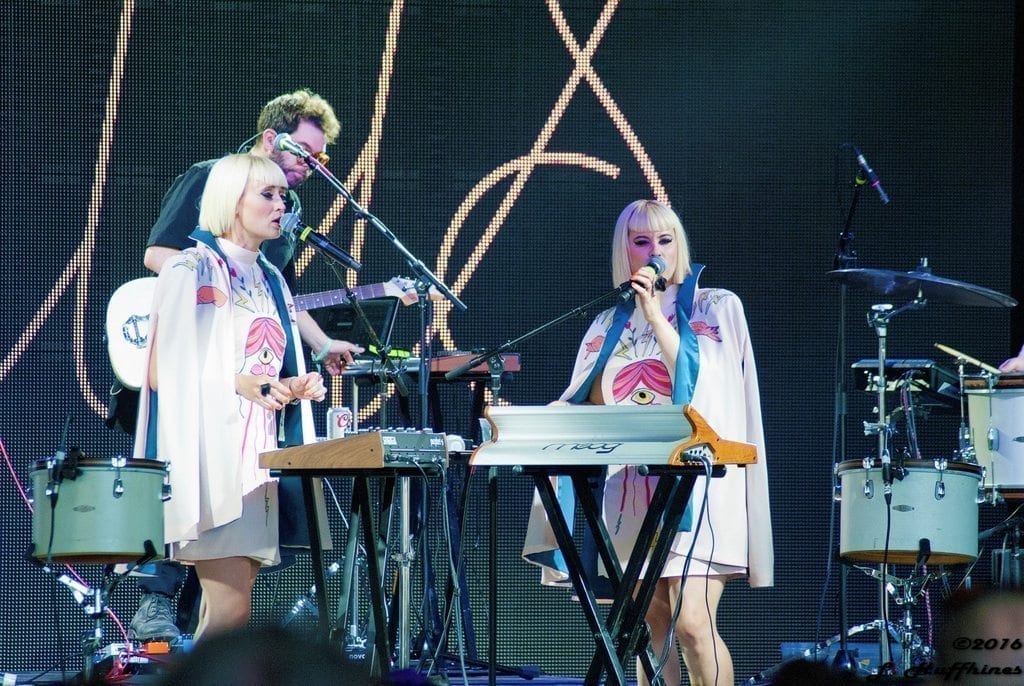 Five musicians on stage, with two ladies who were dressed identically front and center, powering vocals and playing keys and each also had a drum.  In fact, every member of the band seemed to have a drum and a keyboard, with two guys in the back alternating between bass and guitars, and percussion.  All five band members had a  microphone and used it.

I declare that Lucius is the most original band I have seen over a span of thousands of shows and hundreds of artists.  Their vocal harmonies are spot on, their songs are compelling and not reflective of any other band producing music today or in the past.  The vocals are reminiscent of  the girl groups of the 1960s, but the orchestration and songs are totally unique.

You know in science fiction movies, taking place in a far off galaxy in a time totally different than ours, when the characters wander into a nightclub and there is a band playing instruments that look nothing like we have currently, and singing and playing songs that sound nothing like ours do here, today?  Lucius seems to have tapped that energy, being able to create outside of the boundaries of our current musical paradigm yet still creating melodic and compelling music.  They are harvesting energy we have yet to discover,  and feeding it to us in the hopes that it transforms our consciousness.  And every once in a while, they wield the rock hammer and strike their audience over the head with a contemporary sound, harvesting our earthly minerals and energy simply to prove that they can.  And then they return to their own galaxy and continue to broadcast their heavenly sounds to our terrestrial ears.  To say that I was impressed is an understatement.

On my way back from Lucius, I caught one song of Vince Staples in one of the tents.  People were extremely excited, and he came out and launched into his set.  He provides west coast hip hop that mixes modern stylings with classic sounds.

I took a break for dinner and managed to run into some of the great musicians playing.  I sat at a table with Kamasi and Ricky Washington, along with Patrice, who sings with their band.  They were so nice, and Ricky and I talked about where he’s been lately, which felt like a Where In the World type of conversation.  I then ran into Holly Laessig of Lucius and she couldn’t have been nicer- we chatted briefly about New Hampshire and the Stone Church- where they had played three summers ago.

After dinner I wandered over to the Who Stage again, in anticipation of the set upcoming by Flux Capacitor.  But first, Holy White Hounds took the stage.  They were a punky band, a bit of Cali new punk in there and they were quite good.  They fired through a bunch of songs, and they had the angst and love that you expect from the genre-  at times it looked like they were all about to take swings at each other, the next that they may group together in a giant fraternal hug.  Loud and fast, a perfect representation both of their style and the incredible diversity of this festival.

Up next were Flux Capacitor and I wondered how they would deal with such a short set.  The crowd in front of the Who Stage swelled to a size that I had not yet seen.  There had been typically a few hundred people for the sets of other bands, but I watched as this crowd grew over one thousand people, easily.  It seems as if the anticipation for the Flux set had really been shared by a lot of live music fans.

Flux fired into the epic Unite to open the set and it was a perfect  choice.  The message felt perfect as a message for the Bonnaroo crowd and the jam was epic.  They deftly moved from muscular jams to agile break beats.   For the third song a political tune I hadn’t heard before, Freedom Killers wowed the crowd.  With only forty five minutes and a set list that included epic pieces, Flux found themselves having to choose between the two songs they had left on their list with only time for one tune- what to do?  They chose Light at the End to the delight of the crowd.  The trio of brothers from PA took obvious joy in this performance, with Pete Specht throwing guitar hero poses and the band’s typical onstage ESP in full effect.  The crowd erupted for them, and they took a collective bow center stage, triumphant.

LCD sound system started essentially the minute that Flux ended at the adjacent stage to headline Friday night.  I was spent however, it had been a long day and I was ready to chill.  I took the long walk back to my car to get some stuff and then back to my camp and it showed me just how huge the Farm is, and the incredible crowd gathered for the festival.  But tomorrow would be jam packed too,  and after such an epic journey, both on foot and musically- it was time to call it a night.

Keep an eye here for reviews of day two and day three.