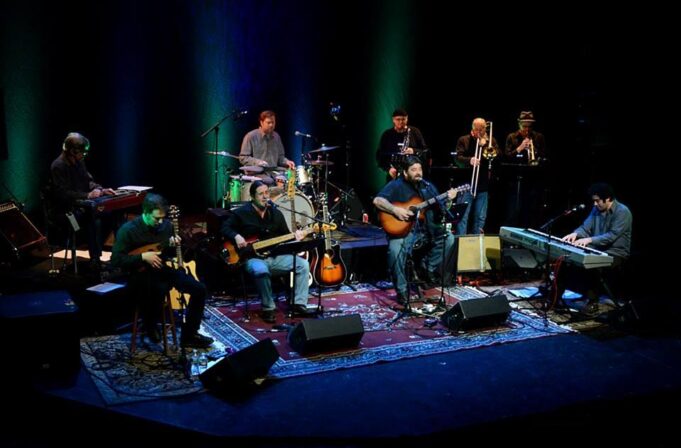 Tor Krautter is more than just a band leader; he’s quite the event producer as well, as he has put together numerous recreations of The Band’s classic concert film “The Last Waltz” over the last 4 years across the Northeast. Live Music News and Review had a chance to catch-up with Tor, the leader of the Western Massachusetts jam band The Rev Tor Band, this week to talk about the project as well as his band, for a live interview on Blab.

The Rev Tor Band will be hosting a special live performance of The Last Waltz Live on Saturday, May 21, 2016 at 8PM at The Oneonta Theatre in Oneonta, NY. The concert features renditions of all the hits by The Band featured in the film, such as “The Weight,” “Up On Cripple Creek,” and “The Night They Drove Old Dixie Down,” as well as songs by Bob Dylan, Neil Young, Eric Clapton, and many more. Musicians from the local music scene perform the songs of the film’s original special guests. The full line up of artists includes The Rev Tor Band featuring members of The Justice League, Hop City Hellcats, Spectacular Average Boys, Bluestone with Darcy Gibson, Mark Pawkett, Karl Allweier, Ned Brower, Steve Dillon, Mary Doherty, Shari Gage, Randy Miratello, Rob Norris, John Scarpulla, and Pam West.  This performance is a food drive benefit for St James Food Pantry – The Lords Table.

On Thanksgiving Day, November 25, 1976, the legendary rock group THE BAND performed “The Last Waltz,” their “farewell concert appearance” at Winterland Ballroom in San Francisco CA. The concert saw The Band joined by more

than a dozen all star special guests, many of whom were and are considered the living legends of their time. This historic event was captured by director Martin Scorsese and made into a concert film of the same name released in 1978. The performances captured on film that night were magical and the movie has achieved a cult classic status among many musicians today.

In 2012, after the passing of Levon Helm, the New England based jam band The Rev Tor Band developed a live stage performance of the classic film. The show features renditions of all the hits by The Band featured in the film such as “The Weight”, “Up On Cripple Creek”, and “The Night They Drove Old Dixie Down” as well as songs by Bob Dylan, Neil Young, Eric Clapton and many more. Musicians from the local music scene, as well as select regional and national artists, perform the songs of the film’s original special guests in their own voice and with their own vibe making each show a unique all-star experience at every venue it is performed.

This show is a community based event that celebrates the diversity and unique energy of the local music seen it is being performed in. The Last Waltz supplies the perfect soundtrack to bring musicians together and strengthen the common bond of music

Rev Tor Band was formed in western Massachusetts by front man Tor Krautter in 1996. Since it’s conception, the band has evolved into a power house on the east coast club and festival

circuit, performing in venues from Maine to Key West Florida. In their native New England, the band keeps a heavy performing schedule enthusiastically supported by a large following of dedicated fans.

The group’s members are an eclectic crew of experienced professionals. Members of RTB have worked with the likes of The Band, Little Feat, Bill Monroe, Pete Seager and Arlo Guthrie. Together they have shared the stage with members of The Grateful Dead, Phish, The Allman Brothers, and New Riders Of The Purple Sage. They have performed at festivals and concerts with The Jerry Garcia Band, Los Lobos, The Funky Meters, Leftover Salmon, String Cheese Incident, Max Creek, Derrick Trucks Band and have toured regularly with Grateful Dead keyboardist Tom Constanten. They where even asked to back up legendary blues man and Rock & Roll Hall Of Fame inductee, Johnny Johnson for a few shows on his 1999 tour.

RTB’s large original repertoire feature funky, bass oriented rhythms and foot stomping percussion. Bouncy guitar lines pull the whole groove together and creates an entrancing state that makes ones body want to move. Soulful melodies are immediately memorable. Even the bands cover tunes have a distinctly “Torricized” feel and include B-side tunes from The Grateful Dead, The Allman Brothers and others.

The Band has 6 CD’s on Smelly Dog Records, “In Search Of Ecstasy”, “Whatever It Takes”, “2000 Lives”, The highly acclaimed “Jamazon” (witch features guest appearances by: Max Creek’s Mark Mercier, Grateful Dead’s Tom Constanten, Banjo Master Gordon Stone & NRPS steel guitarist Buddy Cage), Live & Off The Beat-n-Track” and the brand new Mystic Wolf (featuring guest appearances by: The Allman Brothers Jaimeo, Max Creek’s Mark Mercier & Scott Murawski, Deep Banana Blackout’s Fuzz & Banjo/Pedal Steel Master Gordon Stone. All are excellent examples of their dedication and meticulous approach to the quality of their music. On stage the band’s energy is intense. These boys are not afraid to break a sweat and rarely have a problem getting the crowd on their feet. One club owner called them the hardest working band he’d ever met.

MAY 21 THE LAST WALTZ LIVE at ONEONTA THEATRE; Oneonta, NY

MAY 22 Sundays with Tor at Sullivan Station; Lee, MA

MAY 25 The Rev Tor Solo Show at The Lion’s Den; Stockbridge, MA

MAY 27 The Rev Tor Solo Show at The Adams Ale House; Adams, MA