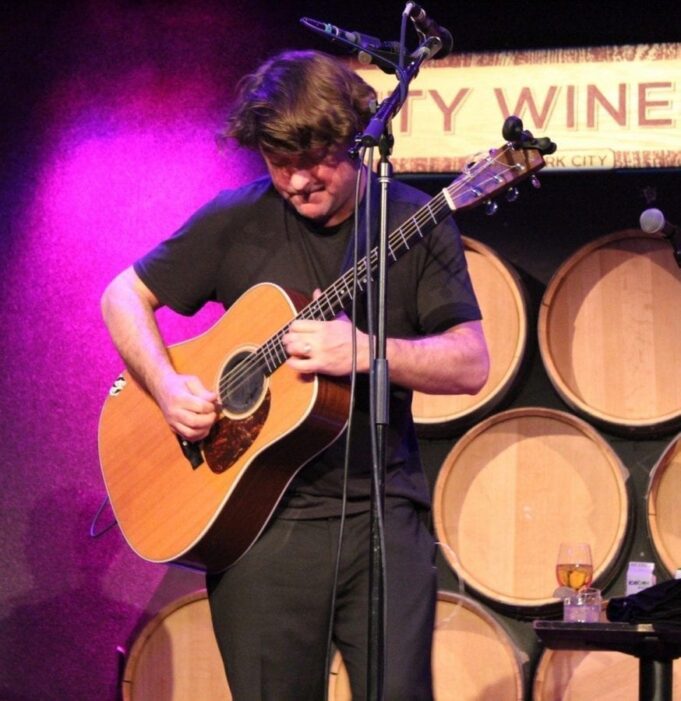 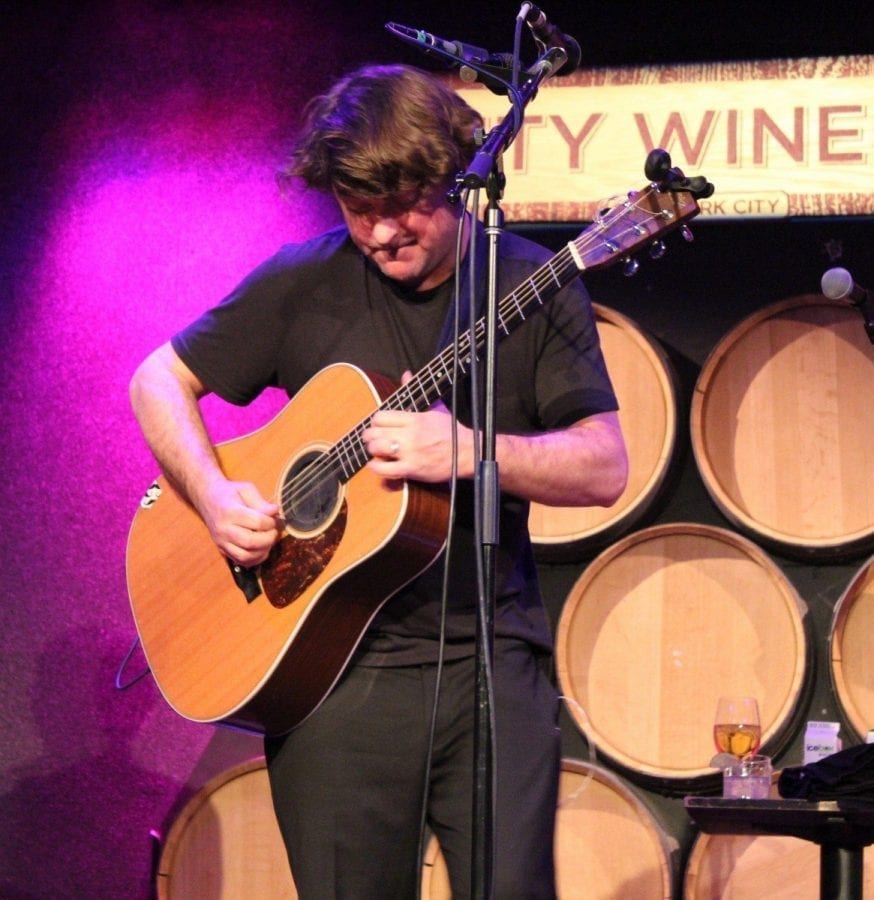 One of the perpetually satisfying realities of experiencing art is when a performance that you’re anticipating meets or even exceeds your expectations. Where does that happen the most? In live music. Early Friday afternoon, I’m riding a metro train into the city and I couldn’t tell you how excited I was to see Keller Williams playing that night with his newest group, the Kwahtro, at City Winery in SoHo. Somewhere close to Friday midnight, and I couldn’t believe how wonderful the show I just saw was.

It was my first time ever at City Winery, hopefully first of many, and it’s super fine venue. Notable for plenty of reasons, the one that sticks with me is the beautiful sound the Winery gets. Opening with “Cadillac” was Keller solo on stage at first-walking around in drunken circles as is his style-and his guitar rang out a rich, warm tone. His style of playing, too, is instantly engaging, and unique even across the musical word he’s coming from. To try and put it to words is a ____but the way Keller plays lives somewhere between the troubadour joviality of the likes of Arlo Guthrie, and the experimental energy of modern. Peppered in, of course, with droplets of many styles that have colored Keller’s musical interests, from the funky to the jazzy to the weird.

After some more classics in like “Doobie in My Pocket,” Kwahtro member #2, guitarist Gibb Droll, walked out beside a warmed-up Keller, and the playing between just the two of them was actually some of my favorite stuff of the night. Because here was another incredibly colorful, and masterful, guitar player. A couple of tunes they played at this point were written by Droll, and each of them elongated from a pretty composition into some of the first gooey, improvisational grooving of the show. Droll and Keller’s playing gave way into simultaneous soloing that danced around each other, the former picking tenaciously as lead and the former handling exploratory rhythm to fin the spaces. 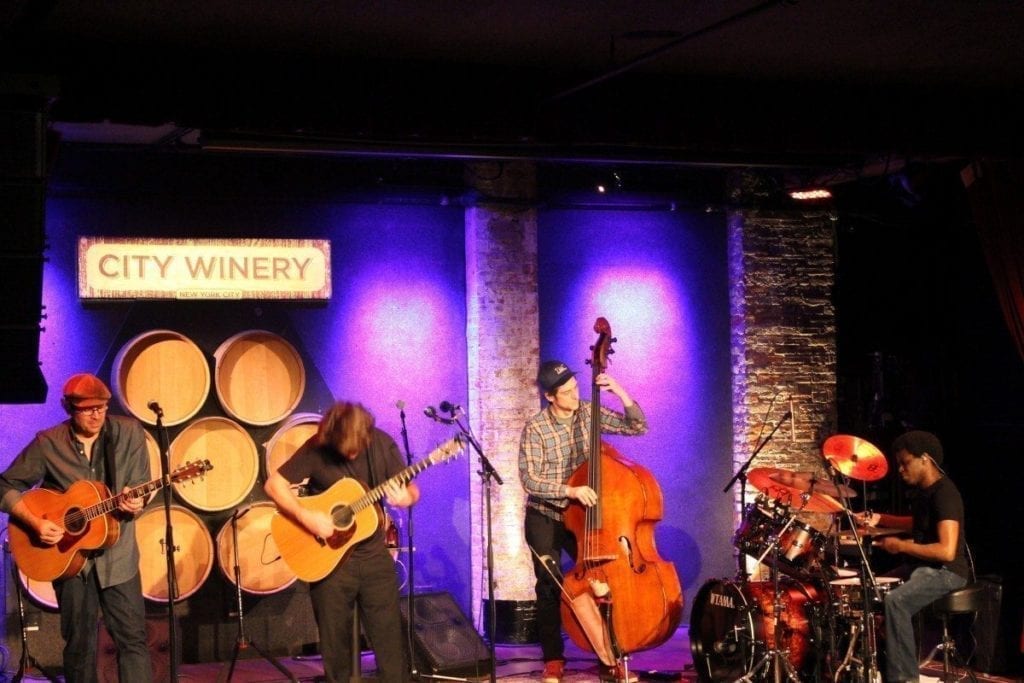 Kwahtro members #2 and #3, bassist Danton Boller and drummer Rodney Holmes, came out soon after, and as Keller himself grandly shouted into the mic, the “Kwahtro Assembled!” He then proceeded to say, “Now Mr. Boller has never played bluegrass bass in his life, so no pressure.” After which the band proceeded to belt out a nice rocking tempo bluegrass tune, with Boller playing like he’d actually played bluegrass bass his whole life. No pressure needed.

But it was really set two in which Keller and his Kwahtro group delivered one of the most enjoyable sets of music I’ve heard in awhile-each song swung tag-team like from one to the next with a building sense of energy that seemed to almost snuck up on the crowd at first.

The set opener was one of Keller’s personal anthems, “Freaker By The Speaker,” but whereas often throughout his career Keller has given the song an extra crispy, extra reggae treatment, this night’s take was refined and mellow-it matched the suavity of all the other jams that were to follow right in suit. Covers of Joni Mitchell’s “A Case of You,”  and Morphine’s “Buena,” the heavy-funk number I was hoping to get this night, mixed in with more newer Keller originals and some lighthearted numbers like “Breathe” and “Kiwi and the Apricot.” But on each song, every time the band spiraled the music headfirst into multifaceted, unique jams, all held up by the tightness they’ve found even after just eight performances together.

No better example could be argued than of their mashup of the Dead’s “Birdsong” and Phish’s “Birds of A Feather.” Keller’s been testing this song pairing with his various band lineups since at least last October-at least that’s when I first heard it-and this night definitely sounded like a formula worked out to perfection, as the band nailed it, sailing from the quieter birdsong jam straight into the all-out, disco-grass frenzy that was ‘feather.’

And as the crowd was inevitably asking themselves what could follow this heady heater, three Kwahtro members suddenly left drummer Holmes alone on stage to deliver a drum break that deserves mentioning in this review. For several sizzling minutes, Holmes stole the show with unbelievable drumming, sometimes at breakneck speed like a near machine, and kept every patron sitting on the edge of their dining chair seats until the end.

I’m guessing the encore, a more recent tune from Keller called “Mantra,” must be pretty popular, for Keller walks out to a cheering City Winery crowd to say, “I guess we should play Mantra.” And there’s no surprise as to why here: it’s a gorgeous tune, in both melody and meaning, a diddy about finding one’s ‘mantra’ that includes audience yoga-sound vocal interplay, and set to a nice funk-ish beat, but that gives way to a soaring peak of sound from Keller and Droll together.

Life has granted me the good fortune to catch Keller Williams with a few of the many different groups he’s shared the stage with-a first show saw him with his WMDS group, in which Droll was also a member, a Traveling McCoury show, and most recently sitting with Phil Lesh at the Capitol last year.  But this four-piece might be career-topping so far: With it’s immaculate rhythm section, and helping hand in very cool guitarist Gibb Droll, Keller has really found a group that compliments his incredible knack for musical arrangement and orchestration, and that translates it freshly on stage.

found on youtube.com by Gerry Murnane

Some Kind of Jam festival preview