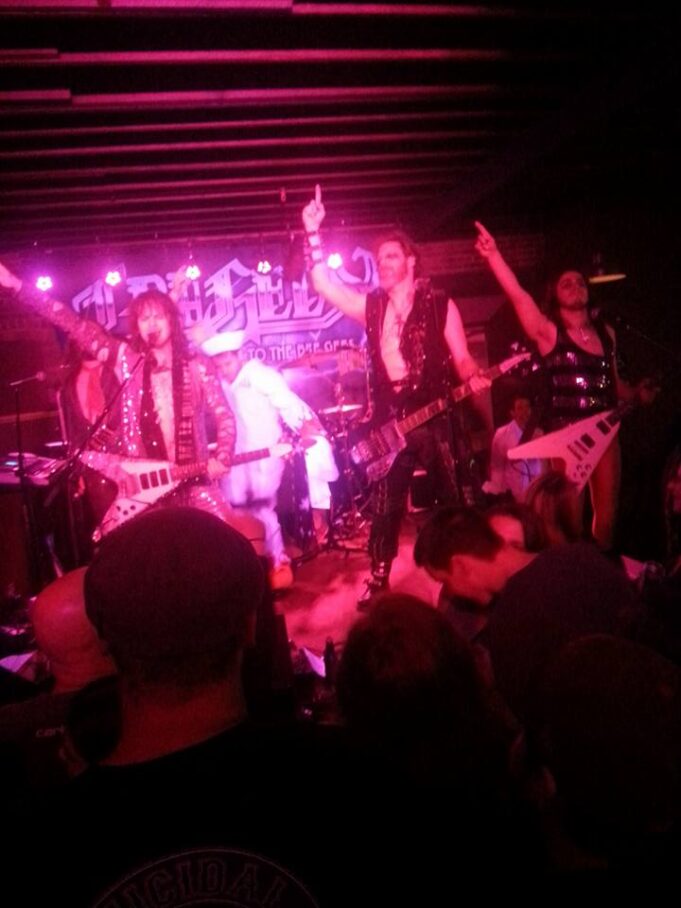 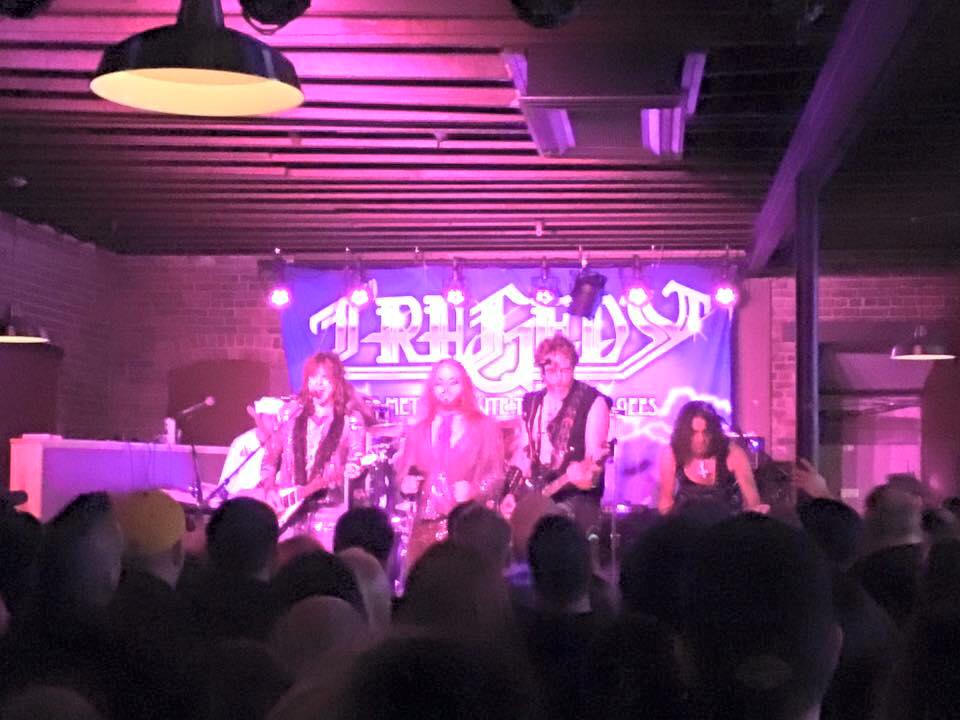 Well,  what’s in a name?  In this case, everything.  Tragedy – an All Metal Tribute to the Bee Gees and Beyond.  That is a big concept though, metal, Bee Gees, Beyond?

About Thunder Road-  It’s a 250 capacity room in the heart of Somerville, Union Square.  Parking was a bit of a challenge but we found a space within an easy walk of the club after about 10 minutes.  The room is basically a big rectangle, you can see from anywhere, the sound system was good and appropriate for the room.  The decor has been redone, looks modern but still holds onto a basic rock club aesthetic.  Downstairs there is a pool table, the rest rooms and an additional bar.  Dan Millen is the proprietor and a well known promoter in the Boston music scene having operated clubs from a music programming perspective for decades, all the way back to Mama Kin.  It’s beyond question that there will be a parade of quality bands running through this room for years to come. 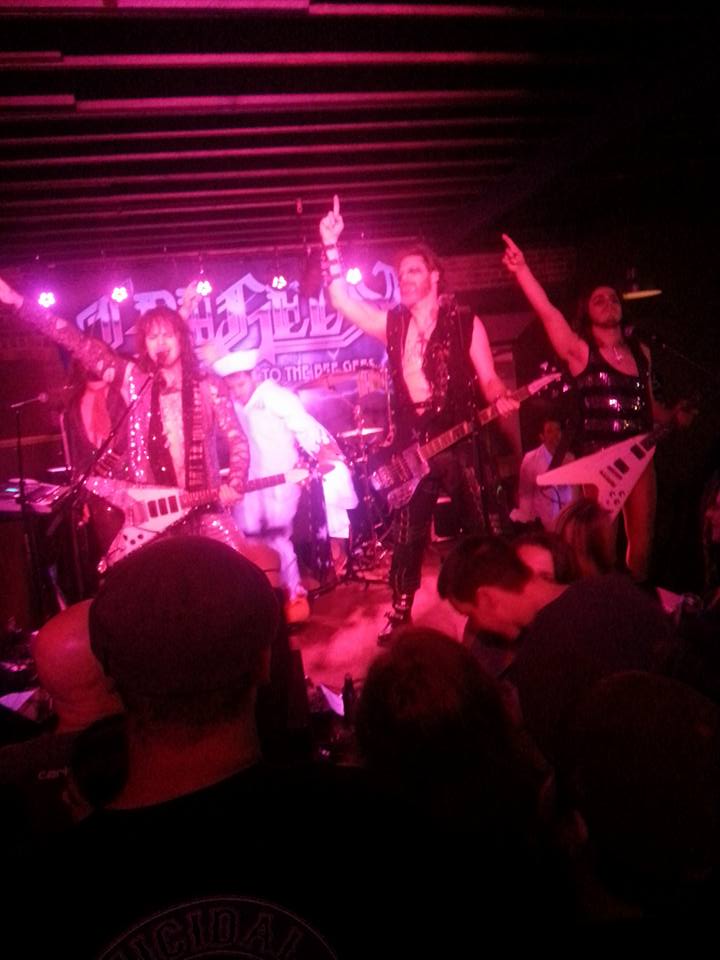 Tragedy came out and right away you knew you were in for it.  The band is a full band-  two guitars, bass, drums, and a guy who ranges from keyboards to vocals, though nearly everyone contributes vocally.  And then there’s Lance- their towel boy- who is on stage the whole time, wiping their brows, engaging the audience, throwing glitter, participating in skits, and acting as a general character and foil for their madness.  They opened in full metal glory, booming drums, searing guitars, building an orchestra and crescendo and launched into..   We Are Family by Sister Sledge altered to We Are Tragedy (I got all my brothers with me..)

What unfolded for the next 90 minutes was mayhem, a spectacle almost beyond description.  They fired through a ton of material by the Bee Gees including songs from Grease and Saturday Night Fever and the extensive catalog of the brothers Gibb.  They also made it through a lot of other material, becoming other bands in name when they strayed from Bee Gees music.  They became Black Abbath to perform Gimme Gimme Gimme, KCDC to do a medley of KC and the Sunshine Band, and Bad Girls to do a tribute to Donna Summer.

The weirdest thing, is that they are great.  They hit on all the elements- the comedy, the tragedy, the ability to shred, the essence of the source material.  The crowd went absolutely crazy.  My ears rang all night.  This is a show that you should definitely see, it’s a fun night.  Stupid Genius?  Genius stupidity?  Beautifully sickening?  Sickeningly Beautiful?  You can take any positive adjective and negative adjective and put them together an reverse them and it will address the irony, comedy and brilliance of this band.

Full Set Audio-  scroll through tracks using the arrow keys or hit the archive full page listing by clicking on the icon. 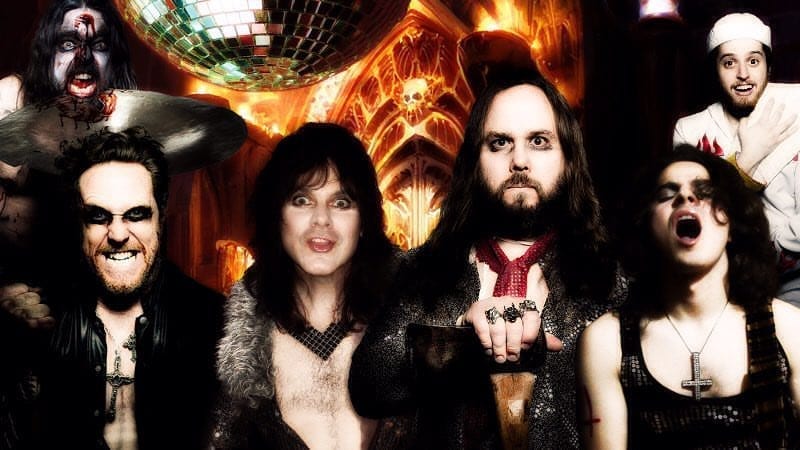 You’re the One that I Want

You Should Be Dancin’

How Deep is Your Love?