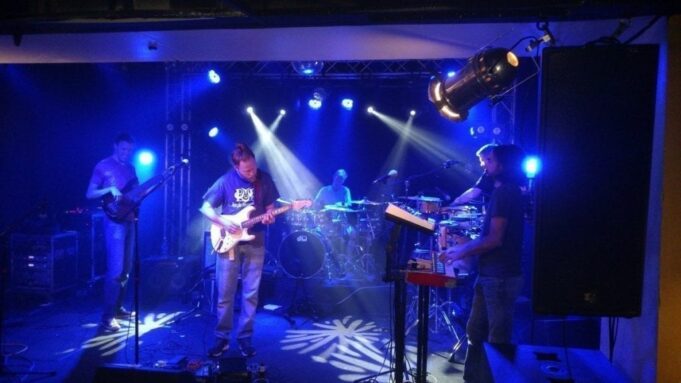 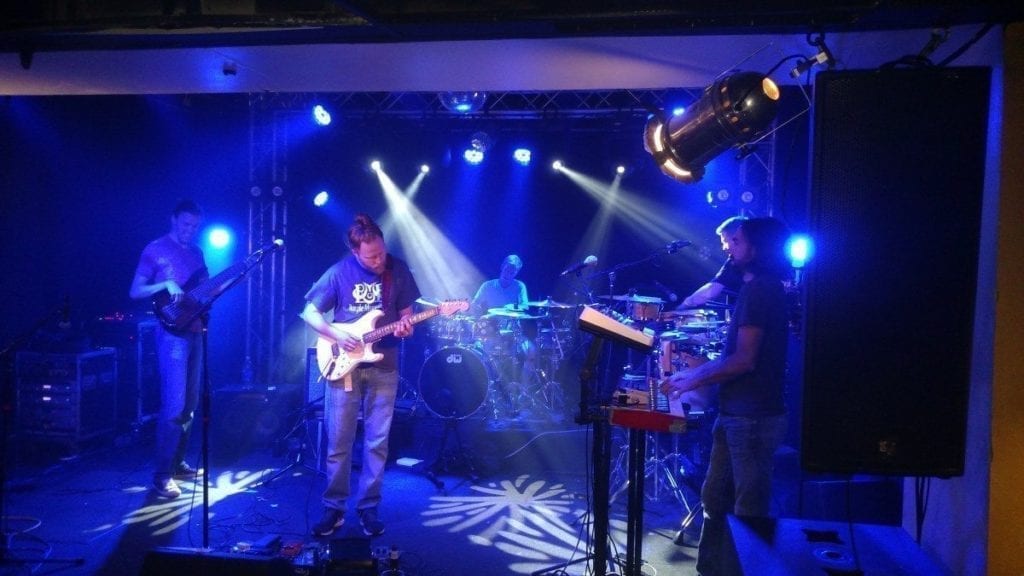 Joe Marcinek Band with Steve Molitz.  Scarlet and Grey Café Columbus OH September 2, 2015   by Jack O’Handley of the band Rubix Wheel    I mosied on down the street towards the club and passed a couple of strangers, some on cellphones, some with distant looks in their eyes.  The crowd outside the club was just kind of lingering.  I passed through the door and paid the $10 cover fee, then realized why the crowd outside was lingering.  They probably were wondering why it was $10, but hey, so was I.  Not too many people there when I arrived right at 10pm.  I met a few people and saw some friends I knew, heard how great Magnaball was(I streamed it) and handed out a few stickers for my band.  The band started out with a soundcheck, but no one even knew it was a soundcheck.    About 15 minutes later they started.  Joe Marcinek plays in a band called Fresh Hops, and Steve Molitz is famous in Jam band circles for his keyboards in Particle.  Off the bat they sounded incredible, every musician being top notch talent and skilled at his craft.  The first few songs were very inventive instrumental jams, with Steve showing extreme outerspace sounds on his two keyboards.  Joe did some amazing solos on his Strat, and the drummer and bassist were locked in tight to get everyone moving immediately.  Then they played “They Love Each Other” by the Dead.  Wow, that got the rest of the dancefloor moving and hugging and dancing.  After that they played a Particle song, and it took the music into a new dimension.  I’ve seen a lot of bands, but never have I seen a keyboardist who can really morph sounds and distort reality quite like Steve Molitz.  He doesn’t sing, he just does these amazing tricks on the keyboard, bending notes and shifting voices somewhat like Edgar Winter’s “Frankenstein” does. 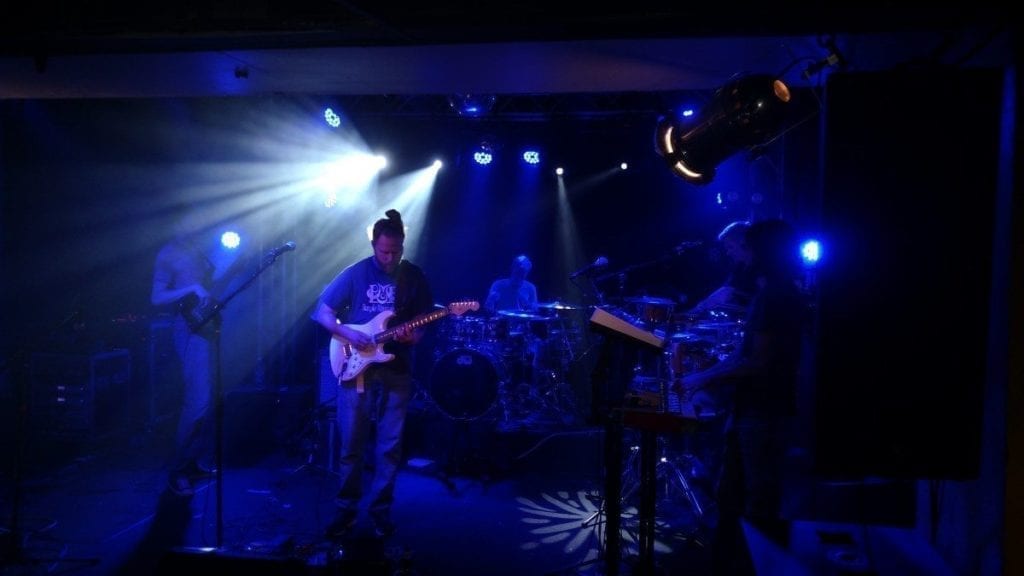 The drummer was so on top of the beat he seemed to be putting his whole body into the performance, driving the band to play better, faster, and harder.  The bassist was in the pocket with slick grooves and busy bass lines that locked in tight with anything the rest of the band was doing.  They even had a percussion player to add to the slick orchestration of the group.  (I saw Particle last Winter with Allen Aucoin(Disco Biscuits Drummer) and this group was just as good as Particle).  So if you get a chance to check em’ out, Joe Marcinek Band is a special treat for any music lover.  Joe plays outrageously good solos that show off the experience and natural talent he has on Guitar.  And he has a good voice too.  I left the show with a bunch of new friends and some really good music in my head.  So if you like Joe Marcinek Band, check out Fresh Hops and Particle as well.  Particle has been around since the early 2000’s, and they are innovators of Jamtronica music.  Fresh hops is a four piece band formed in 2008 that mixes the sounds of Jam, Bluegrass, Metal, Jazz, and Rock to make improvisational songs that shake hands with different genres.  Particle, Joe Marcinek Band, and Fresh Hops will all be on tour this Fall.       Be sure to check out Jack’s band Rubix Wheel