The Werks are an Ohio band formed in Dayton around 2007.  They’ve toured the U.S. multiple times and most of the year they are out and about in their tour bus living the rock star dream.  But these guys started like any other band.  They played small festivals and bars in their early days, and frequent touring brought them into the mainstream jam band scene.  I once saw them in 2008 at a bar with 4 people there in Columbus.   And my band was on the bill with them in two festivals in 2009.
They’ve climbed the jam band scene with awesome recordings, great live shows, and consistent touring.  The hard work they have put in has paid off for them.
Check out the review by Marc Lovely of The Avett Brothers and Shovels and Rope from June 14 2015.
So, last night I had not seen them live since 2012, and made a special effort to get there and witness my buddies in action. When I first walked in they were playing some mellow tune and then on to another more vivacious tune.  They played an amazing 2001 by Phish during that set that had the crowd reeling.  Rob kept time on the drums and played extremely well.  Houser was ripping incredible solos on his blue guitar.  Dino held down the low end on bass and Dan played great organ and keyboards. The band played tighter than I had ever seen them play before.  Although I did not know the names of all the songs they played at the time, I loved how they had morphed into a dynamic group with peaks and valleys in the music.  This is a group of musicians that have formed a tight performance unit that has earned the right to play bigger stages, for sure.
It was a high energy show, and the light show was amazing as well.  The peak moment of the set for me was when Jake Goldberg stepped on stage to play a song with the Werks.  He is a well known bassist around Columbus and the crowd went bananas as he slapped and plucked intricate bass lines with his eyes closed, his long hair flowing from the breeze of the fans.  I could have sworn they teased “Esther” during his time on stage.  This really cute hippy chick was dancing wildly as he played with the Werks and they gelled better than ever.  Eventually Dino came back on stage and the band continued to rock.
The show was well worth the 15 bucks I paid to get in.  The crowd was a mixture of bros and hippies, as there was Park Street Festival going on in the streets outside.  The Werks are a tight, focused jam band,  and I highly recommend checking them out.  If you like Phish or the Disco Biscuits, the Werks are like a new variety of music that meshes many genres to give a show that people can dance to, meet new friends, and to be enlightened.
The Werks Band Members: Rob Chafin, Dino Dimitrouleas, Chris Houser, Dan Shaw
Jack  O’handley is a huge music fan, and also plays in the band Rubix Wheel. 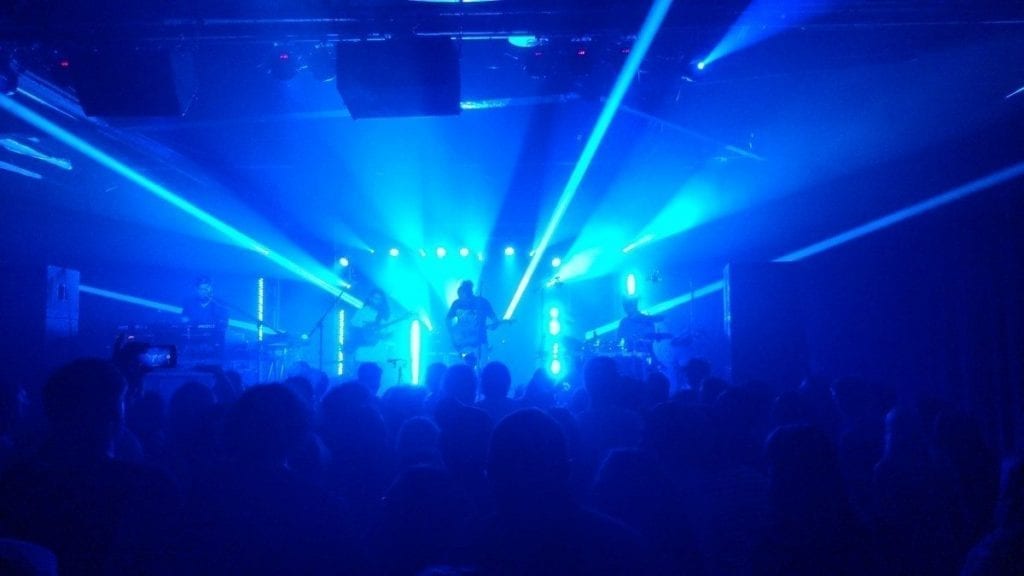 * With Jake Goldberg on bass.