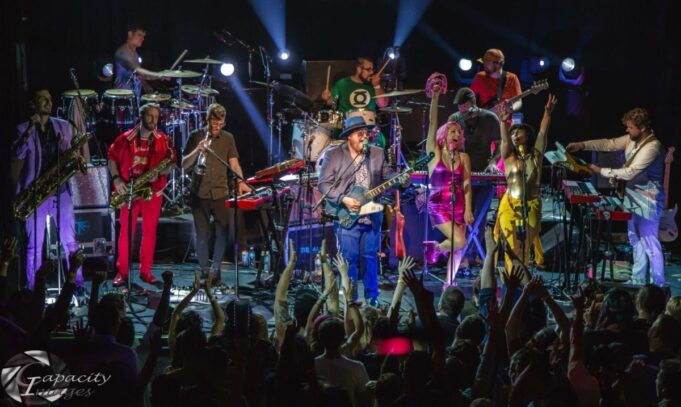 The Hudson Valley Resort and Spa

The newly-renovated Hudson Valley Resort & Spa offers convenience to music lovers seeking to check their keys at the door and party all night, with their bed just an elevator ride away. To underscore the fact that this is essentially a one-day Winter festival / slumber party, Turkuaz and the promoters have packed the 27 hours between doors on 12/31 and check out time on New Year’s Day with a broad range of music spanning multiple genres and the most user-friendly situation possible. This year’s inaugural event will feature Consider the Source, Tauk, Spiritual Rez, The Primate Fiasco, Mister F, Danny Pease & the Regulators and– of course– the hosts, Turkuaz.

Check out the review of String Cheese Incident at the Capital Theater in Pt Chester NY.

With strong demand on both coasts and a couple of California New Year’s Eve parties under their belts, Turkuaz was looking to celebrate the turning of the calendar a little closer to home and establish a tradition for their legions of Northeast-based fans.

Central to the region and still a mere 100 miles outside of the band’s home base of Brooklyn, NY, this funk army of multi-instrumentals and singers that is part freight train and part tyrannosaurus rex. That’s one way to describe Turkuaz, but it doesn’t address the music. In this regard, as with any band, influences are everything. One cannot escape them as one seeks to carve out a unique sound for themselves. Still, there are so many benefits to having Sly & The Family Stone, Rick James, Parliament and Bohannon in your record collection. With this as the basis for a recipe, Turkuaz adds healthy doses of jittery, world-pop-power groove-reminiscent of Remain In Light era Talking Heads-and a passion for Motown and R&B, resulting in a refreshing twist on the funk idiom.

Check out the review of Roots of Creation at Hinge in Northampton MA.

The Primate Fiasco, perennial favorites of the Northeast Summer festival circuit, kick off the day with a combination of old timey Dixie Jazz and modern groove/funk/improv. The band pioneers what is possible with mind­bending harmonies of dual saxs, funky pockets of a hyperactive Sousaphone player and banjo that thinks it’s a Fender Strat. Add lyrics that grab hold of even the most inattentive audience and beats that channel surf like a remote that’s been sat on, and you get a truly original, high energy music event.

After Primate, the audience will jam out with Albany-based Mister F.  Formed in 2013 from members of Timbre Coup and Capital Zen, Mister F is an eclectic, high-energy 4-piece band that takes a no-holds-barred approach to blending genres while keeping your feet moving.  They are followed by the roots-reggae-punk sounds of Western Mass’s Danny Pease & The Regulators.  A veritable force in New England for a handful of years, the band is composed of musicians with ranging backgrounds, and their style of “Dirty Punk Reggae” continues to morph and take shape, while always staying true to reggae roots and ska rhythms.

Spiritual Rez, the storied reggae / ska / indie roots band from Boston, comes out horns and vibes blazing for the pre-Turkuaz dance party to get people in the mood for the New Year.  The band’s infectious anthems are chock-full of rollicking guitar riffs, ocean-bathed melodies, swagger-centric basslines, crisp soaring horns, and ska-infused jam sections. The septet draws stylistic influence from nearly every musical movement of the 20th century. Turkuaz directly follows.

Northampton’s The Primate Fiasco performs an additional set of their deceptively well-written songs-clothed in the circus atmosphere of brass, banjos, accordion and electric folk-dance mayhem before the Manhattan-based “Middle Eastern Sci-Fi-Fusion” band, Consider The Source. Ushering in the late night, Consider The Source’s uniquely intense and technically masterful music has been heard all around the world, in addition to their North American tour circuit, and sets the stage for one of 2014’s buzz bands, TAUK, whose heavy, instrumental rock fusion closes out the evening and brings on the morning.

With the convenience of not having to drive home, and having some of their favorite bands and friends all around them, fans are offered many room, meal, beverage and VIP plan options.  Tickets start as low as $115 per person, making the event is a real value.  The package includes hotel, NYE dinner, brunch the next morning and all the hotel and spa’s amenities. Tickets can be purchased at http://rocknrollresort.com/TheBallDrop/.  Promoted as a “gala affair,” it is requested that attendees “dress to impress.”

More bands are being added including this month’s BAND SPOTLIGHT, Flux Capacitor.  They will be performing a New Year’s day set that will be sure to disable the cooling down period as they get things heated up for the in house after party.  Check out the review of the April Rock n Roll resort event, the Dream Machine.

Check out the review of the April Rock n Roll resort event, the Dream Machine.

Check out the review of Roots of Creation at Hinge in Northampton MA.

Check out the review of String Cheese Incident at the Capital Theater in Pt Chester NY.