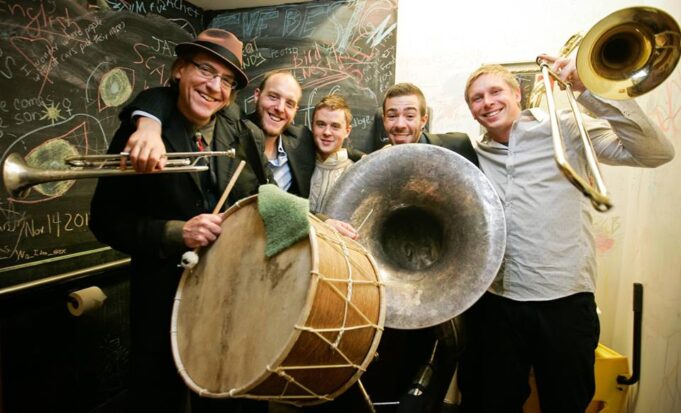 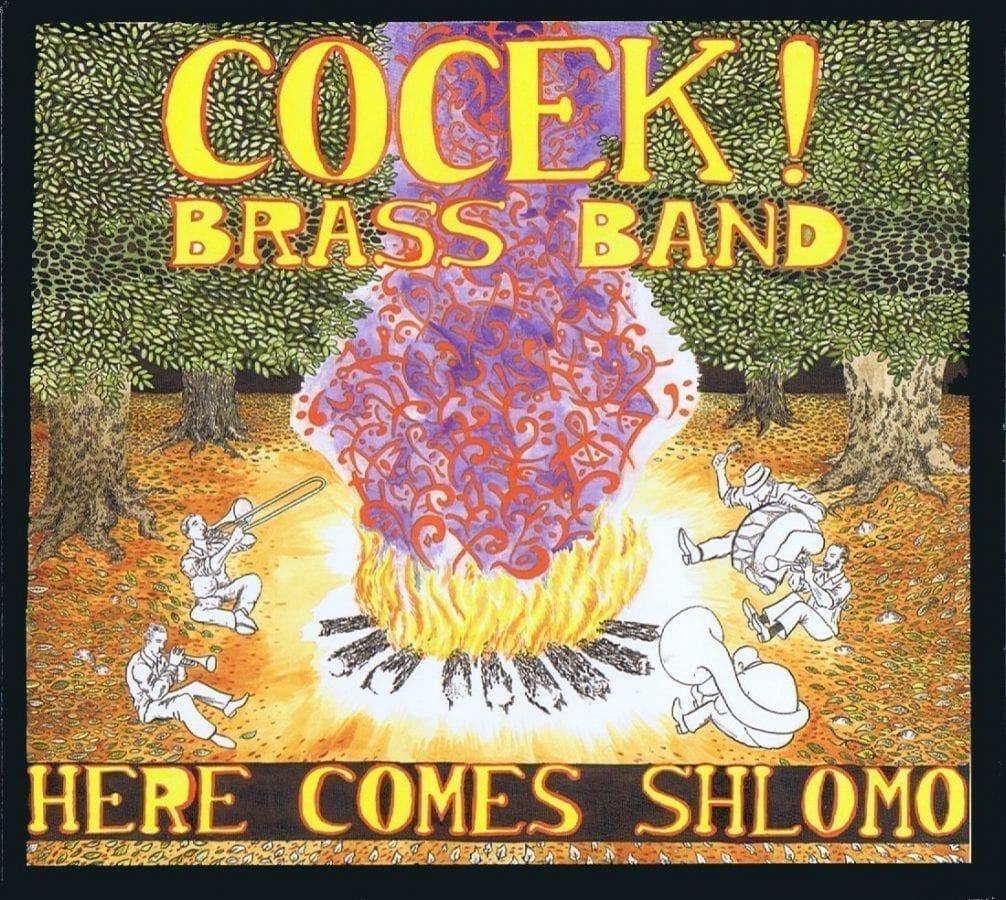 What an entrance!  Cocek Brass Band just came in the door playing…

Right over the house music, even!  They just tromped on in like a minstrel troupe, parading across the floor and up to the stage at Johnny D’s.  This is certainly something different for me.  I had thought that band leader Sam Dechenne told me this was, like, 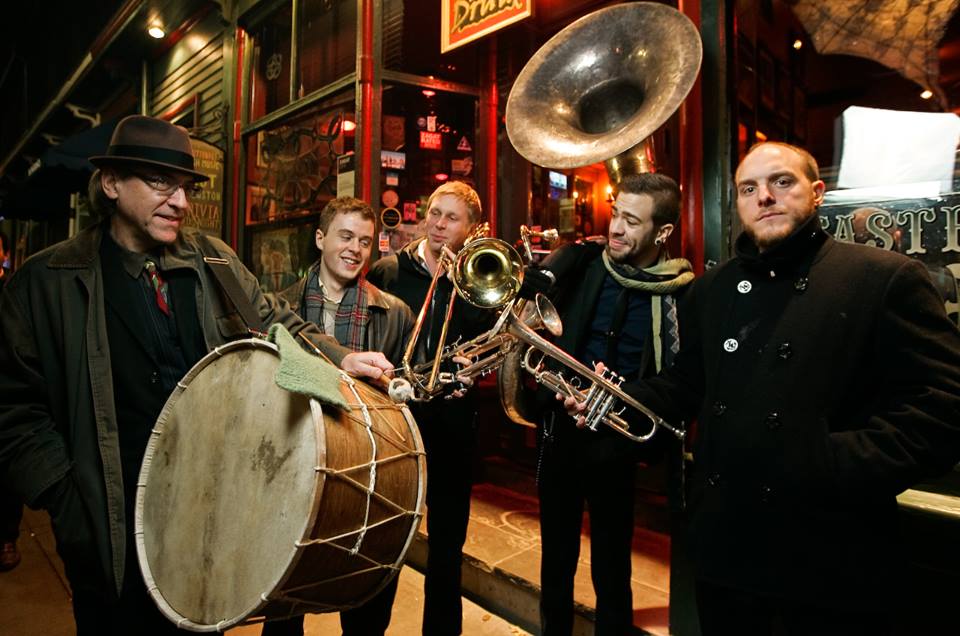 Brazilian boogie music or some such thing, but between songs just now I heard it a-right:  … Balkan!  A few folks seem to have some idea how to dance Balkan, and this increases the joy for all!

In fact, the audience here has been genuinely enthusiastic and supportive all through this evening.  This is noticeable with Boston shows ‘most every time, and certainly for any local band around town, any town.  But this venue in particular seems to house an appreciative audience.  And with music as far from the mainstream as this Cocek Brass Band, it’s that much easier to love what they do- or to hate it, one might suppose, but their self-effacing and sincere manner serve to counter-balance any apprehensions.  The band’s manner is also very proud, in the positive sense.  Like the presentation of a pet project, or a Big Debut (this is, in fact, their CD release party), these gentlemen are clearly happy to share the fruits of their labors. 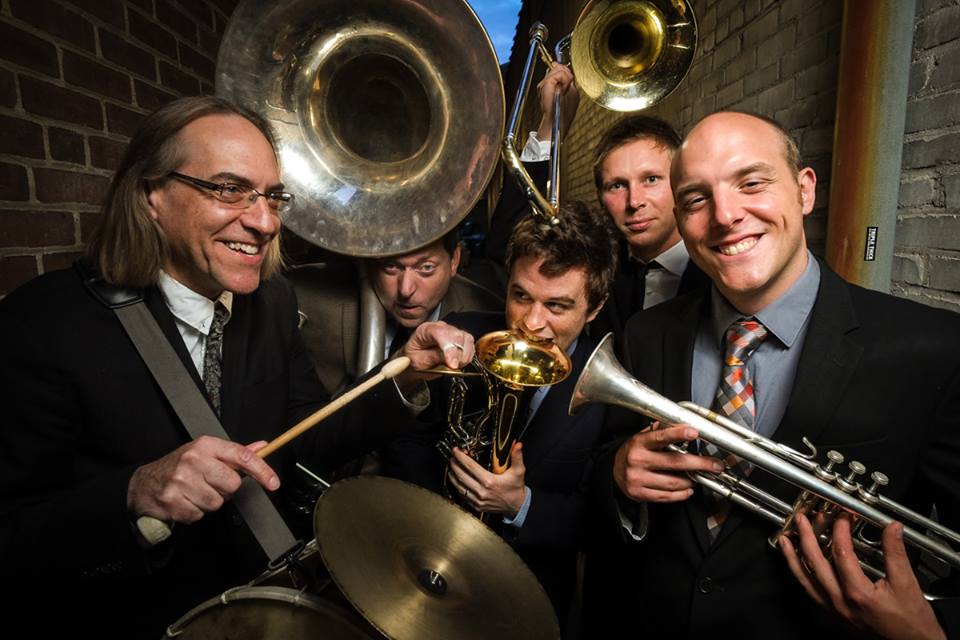 Not many will have heard of a rotary-valve flugelhorn, but the thing sounds great!  And the large-ish implement, which might be mistaken for a small-ish tuba, would seem to be a sousaphone.  The Tappan drum looks, and looks to work like, a marching drum- the one that does all the work.  The trombone and the leader’s trumpet both appear to be fairly normal instruments, but that’s about as close as this ensemble gets to any kind of ‘average.’

What might be the most impressive thing about this band is its authenticity.  Certainly the fellows’ manner qualifies for that assessment, but the music even more so.  At first glance, certain ‘neo-brass-fusion’ acts might come to mind, such as the brilliantly creative three-piece Elephant Wrecking Ball or the similarly ambitious Primate Fiasco, banjo and all, but where artists like those are, by definition, ‘fusion’ in the generic sense, as they operate more or less within the (alt-) rock idiom, Cocek Brass Band is true to its name. 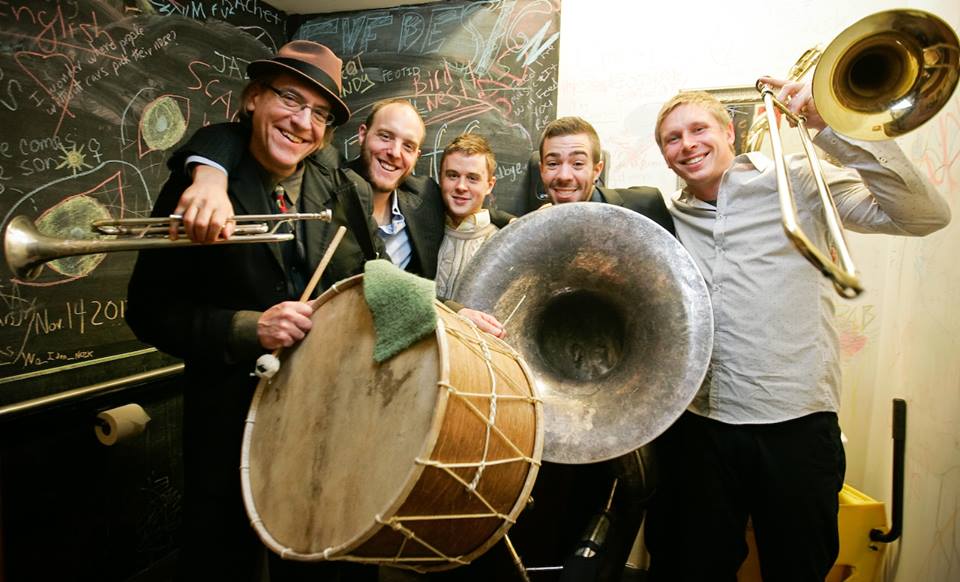 They remain a brass band; they could play an ethnic wedding as readily as a concert hall or rock club (as tonight), and even the word ‘cocek’ is Balkan for not only the name of a dance, but for the entire cultural art-form.

The five gents exit the building just as they entered, playing to great dramatic effect, and then they come right back in again, effectively creating both an encore and a theatrical experience.  The venue seems to have been an excellently fitting choice for this Premier-caliber event, as the staff and atmosphere are all conducive to a positive experience for those appreciative and fortunate music-lovers in attendance.  I even got to enjoy a couple of cups of coffee with the show, and later on in the evening- this is a rare treat indeed!

Disclaimer:  The parent company of this website is a music promotion company.  They do not however represent Cocek, the venue, or anything having to do with this article.  We’re all into music, get over it.