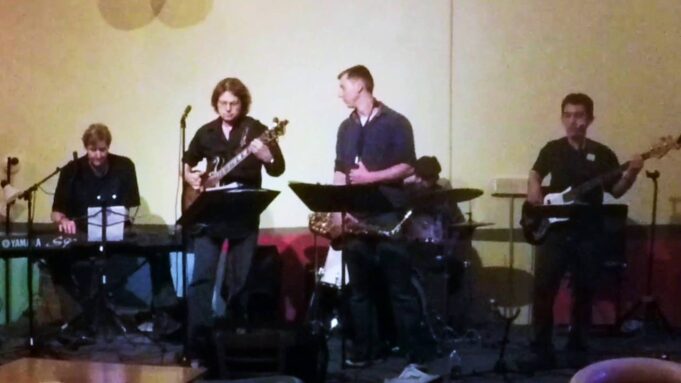 Full Disclosure:  Nobody having to do with this article has any relationship to the band or the venue.  No money changed hands, Jimm O’D wrote this out of his pure love of music, and his thoughts on this show.

First thought, as Doug Hewitt sings “You’d Be So Nice:” He sounds much more like an actual jazz singer than I expected (I’ll have to get my hands on Zen Cats someday). Listening to his two albums, the new (March 2013) “Roots in the Sky,” and the 2006 “Picasso Tomato,” one likely thinks that this is a jazzy pop singer, but listening live, it soon becomes apparent that his jazz roots go deeper than just leanings. The handling of the voice; the tone and range and variety of nuances, all bespeak solid skill and deep understanding of music properties. This is a singer who would be right at home doing the club scene or the lounge thing, but having been initiated by the pop-fusion sounds of his two CDs, this seems a pleasant surprise indeed. In business terms, the service provider has exceeded expectations.

What I really love is guitar. Jazz guitar, when it’s played as well as this, can be especially enjoyable, uplifting and fulfilling. The notes are spry, the tones are bubbly, the overall sound is full, and the skill is unmistakable. Jazz guitar can’t be played poorly, it seems; anyone trying to get away with lousy playing in this genre just won’t be around for long. Maybe it had to do with the internal sensibilities of the individual who chooses to follow this path, especially as a career. Such a one is drawn to the pursuit of artistic, intrinsic values and rewards, and such a one as this cannot help but strive to improve. It’s the way this animal is

So I came here tonight without much idea of what to expect; it’s an open mic format with guests welcome, but I guess I did expect to hear some nice guitar. Doug’s two albums are full of it, well-played guitar I mean, but always in service to the music. They are songwriter’s albums, focusing on overall arrangements more than guitar or vocal showcases, so I was really looking forward to getting a taste of this player’s guitar. Again, expectations are exceeded as the whole band shines. The keys are played perfectly, the stand-up bass is exactly what one hopes for, and the drumming is clearly of the highest caliber. Experiencing Doug Hewitt’s music, I am beginning to suspect (or Expect), is swell beyond the scope of what is normally thought of as’ local’ music. And the cornet player- soaring, fluid, dynamic and gentle when it should be. In a word, expert, as with all these musicians.

The band just did Wayne Shorter’s “Footprints,” speaking of soaring, and each player was given ample opportunity to show off his talents, but none even the slightest bit beyond exactly right. This is heavenly music; immaculate even. And as Doug’s guitar comes out or steps back, then pauses, allowing space, or lets fly with an amazingly executed solo, full of lush, round (not fat) notes from all up and down the fret-board; and as he sings old favorites like “Fly Me to the Moon” with a richness and smoothness that can only be called ‘velvety,’ the listener must pause to

consider how fortunate we are in this area, that such hugely talented artists as Doug Hewitt (and many others) have chosen to play, and stay, here in Western Massachusetts.

A number of guests contributed to the proceedings tonight, mostly singing a couple of songs apiece, and it is hoped that this new monthly happening at Amherst Chinese will attract plenty more jazzers in the future. The day will be the “second or third” Wednesday of each month- we are promised ample announcements on Doug’s Facebook page or by way of postings around the restaurant. The next session will be Sept. 10; they go from 7pm until the house closes after 10.

Full Disclosure:  Nobody having to do with this article has any relationship to the band or the venue.  No money changed hands, Jimm O’D wrote this out of his pure love of music, and his thoughts on this show.

Check out the festival preview article on Shoefest.

Check out the festival preview article on Wimbash being held at Sully’s and hosted by Doug Wimbash of the Sugar Hill Gang and Living Colour.

Check out the article previewing the Catskill Chill festival, including video of Fikus and a full schedule of artists.