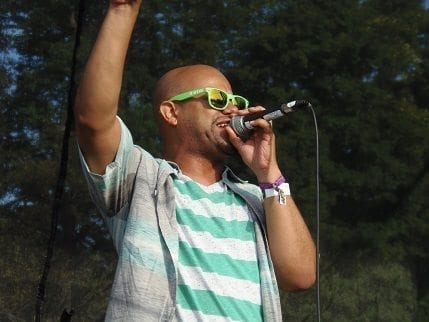 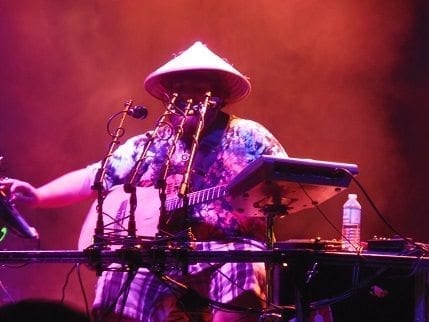 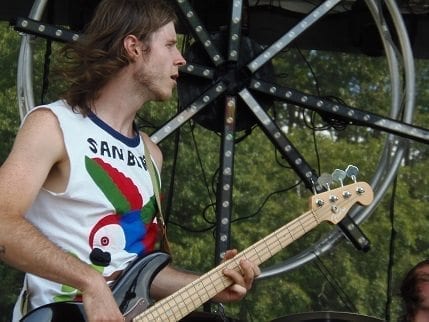 My attention was split next between the two bands that were in close proximity in so many ways.  On the side stage was Outer Stylie, helmed by Nathan Martel on vocals and guitar.  On the main stage was the band Orange Television, the band from which Nate is known to most Northeastern jam band fans originally, but now on his own.  I was able to catch some time with both bands, and the experience was rewarding.  Both bands are birthed from a concept of melding the improvisational freedom of the jam scene with a healthy respect and reverence for hard rock and heavy metal.  Parts of Black Sabbath, Van Halen, Radiohead, and Tenacious D are visible with both bands- Outer Stylie tends to be more of a fun loving band, bent on having a good time while rocking hard; Orange Television seems to set out to project a purposeful artistic vision, with Howie Feibusch on guitar and vocals, and I believe he is also the principal songwriter.  Their music tends to be dark and at times trippy (I’m reminded of an early Pink Floyd, but with a nod toward heavier music), with an extremely solid rhythm section supplied by Monte on drums and Miles on bass.  Every time I have seen them, they have improved drastically, and you can tell that there really is something there to explore.
Next up on the main stage was a band called Shlang.  Apparently they are a collective of musicians and djs from a variety of well-known acts in that world, about which I know very little.  I ran into the festival promoter Jeff and I asked where the band was from, and he said from all over and that they were members of many named acts in the more electronic leaning live electronic world.  There were several bands that I have seen over the years t Shlang reminded me of, though their spirit is their own clearly.  A combination of live music instruments with sampling, computer generated rhythms coupled with a live drum set, thumping, at times primitive and at times futuristic, but more often both at the same time.  I got a new millennial tribal vibe off of their sound, but I’m certain that I am using those terms incorrectly!  So far as under the radar bands that I have seen, both K’Chung of Seattle in the mid-90s and Ka’Nal of California in the mid-2000s both sprung to mind.  The easy comparison is to bands like Ozric Tentacles who are specializing in live electronic music with flair.
There was a really tough hip hop act on the main stage next, and I won’t call out the performer, but sadly their voice was completely shot. And given that the act was just a DJ and a rapper, and with the rapper’s voice sounding like he’d been shouting for the last 10 years, the resultant sound was really rough.  Happily, I saw the Alchemystics setting up on the adjacent main stage and I got ready to catch their set.  I wandered back to the booth and heard what sounded like live music, so I picked into the VIP  area where there was a band playing.  A tight little unit with keys, drums and bass- all unfolding for the VIP area.  I’m guessing that the band was called the Chive from the t-shirts I saw walking around, but I’m not sure-  they were fun and a pleasant surprise.

The Alchemystics have been hitting the festival scene hard for years, and this summer is no exception- after killing it at Strangecreek in MA in May, and Ziontific in June, and Kind Roots in July, Bella Terra was the obvious next step in their summer festival sweep- and Wormtown is just around the corner!  You can tell that they are very comfortable with their current lineup which now features a breath of fresh air on the bass, new guy Mike!  They cruised through a set of great material including some vintage material (Fire from their first album), and newer material Thinkin’ bout You  from their current release and a brand new song premiered at Bella Terra I think that was named Sparkle Pimp that their MC Force indicated was going to be on their next release.  It was good to see some different material in their set, and they proved why they are a staple in the northeast festival scene.  Catch them at Tammany Hall on SAT September 7th for their return to that home away from home for them.
Sadly, I had to leave Bella Terra at that point for some significant travel.  But what I saw there was a festival that I think is in their fourth year, is carefully trying to evolve and grow, while remembering who they are and why they started this festival in the first place.  While many festivals tout a varied lineup, Bella Terra really delivers in the diversity department.  Significant time was spent on jam, hip hop, electronica, and even hard rock and reggae- all in the mere 22 hours that I was on site.  From my chat with the promoter and his family, I know that this was a high priority for the festival.  I had a long list of bands that I missed and wished I hadn’t including music that is getting ready to happen the  afternoon that I write this including my favorite tribute band Start Making Sense- a tribute to Talking Heads (who will be at the Old 78 Farm Fall Festival in Warwick MA on SEP 28th) who will then be followed by one of my favorite bands of all time, Max Creek (who will be playing at the Waterhole in Saranac Lake NY and then the Harvest celebration in Pulaski NY on the first weekend of October.)  I guess it’s okay to walk away with a little bit of anticipation for next year.  Right?