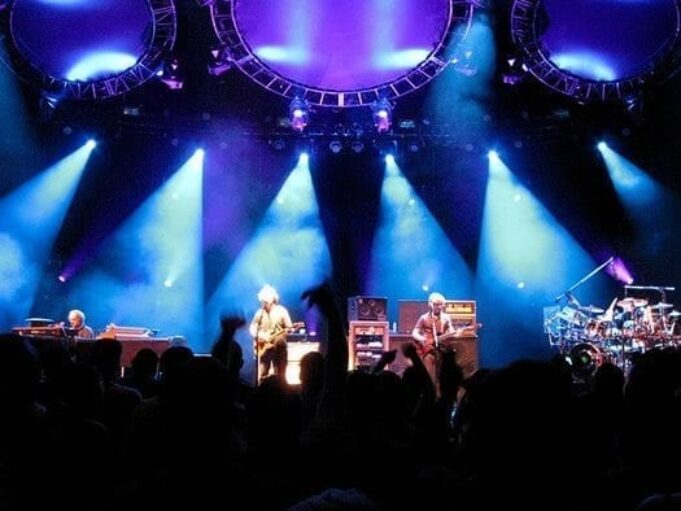 A Night In For A Show?   by Jason Staniszewski

Preparing for the show I felt a little more at home, that’s because I was. Having a live Phish stream for three nights is amazing, but the way in which you can watch on any portable media device is beyond cool. After listening to the Bangor, Maine show and the first two nights of SPAC, I knew I needed to watch the last night as well. Although the first few shows of this run had some very good moments, there were a lot of flubs and a lacking of the “IT” factor. That was until the band took the stage Sunday at SPAC. Almost creating a sense of we know we have something to do here, so get ready for it.

Coming out with one of my favorite songs, “AC/DC Bag” was started and the crowd went wild. “Brain Dead, and made of money, no future at all!” I could feel myself smiling from ear to ear watching this HD multi-angle pro shot show from my computer on the back porch. All I could think was that technology was awesome! A very well played “AC/DC Bag” took flight into another great song, “Back On The Train.” This take was well played and extended over ten minutes. I could feel the band catching that groove during this one with Trey finally breaking out of his shell and taking the reigns.

Taking it even further along with the segues, Phish broke into “Divided Sky.” This phenomenally orchestrated piece captured the audience once again, coming in at just under seventeen minutes in length. This band was on a mission tonight, and this first set was already one for the books. After a quick chat and a decision for what was next, the band began “Free.”

“Free” is a song originally off of the “Billy Breathes” album. After “Free,” the guys wasted no time segueing into “It’s Ice,” the first of a stint of “Rift” tunes. This version of “It’s Ice” was superbly well played and again proved why I love this band so much. Forming out of “It’s Ice” was “Mound,” a song I have been chasing for years, and seem to always miss it. Although the intro was a little botched on Trey’s part, the band got it together and really took this one for a ride before ending the song. “Maze” began and the smiles have returned. There was a monumental jam, allowing the guys to really take some chances and open it up for a bit.  Wasting no time, Trey took over and absolutely tore into an amazing solo.

Picking my face up which had been turned into a puddled mess, “Limb By Limb” had begun. This song pulls so many levels of jamming. The 6/8 time signature is another killer feature to this one. The time was here and “Walls Of The Cave” ended the set. “Walls Of The Cave” is a song that took me a few times to really get the pure genius of. The jam segment is a perfect portal for Phish to do what they do best. The first set was one of the better from these guys in the past few years in my opinion. I was ready for set two to start! 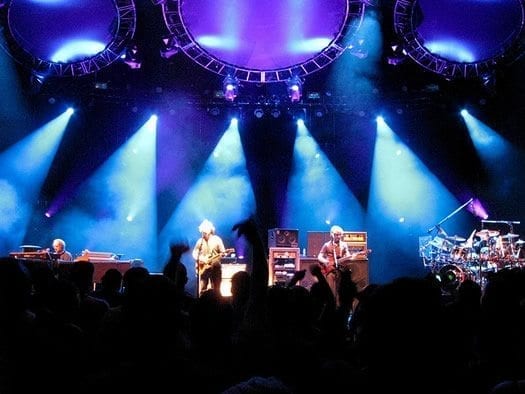 Second set was upon us and the lights went down, but not for long. Chris Kuroda’s light rig has grown into a mega-beast at this point. His lighting is on another level and he is one of those guys that does his job so well.

Mike started the Meatball and Flanger infused “Down With Disease” intro, and the crowd was ready, I was ready from home, watching. A really well played jam transferred nicely into “Ghost.” I already knew this was gonna be a second set that I should have attended. The “Ghost” was nothing less than astounding, even including a Guy Forget quote from Fishman.

The explorations continued and we were greeted by “Piper” and what a “Piper” it was. Containing a “Dave’s Energy Guide” tease from Trey this one did not disappoint. Reading some others thoughts online I couldn’t agree more with a point that someone made with SPAC and their incredible “Piper’s.” Leading out of “Piper” was “Wading In The Velvet Sea,” a song that I have always loved to catch. This one seems to really have emotion behind it, and I will never forget being at Coventry and Page just weeping and pouring it all out on stage trying to keep it together to finish the song.

Continuing on, the band went into a very unique “Run Like An Antelope.” Or should I say “Run Like A Meatstick?” The fact that in their 40’s these guys can still have fun and play around with lyrics, songs, shows, sets etc. is such a breath of fresh air. Showing others that there is still a way to not be serious, but still getting their point across as professional musicians. Leaving the gearshift in high gear, the band quickly turned the audience into a giant “Meatstick” dance party, even including the Japanese lyric portion. “Whoa- Shocks My Brain” is right, and the guys once again took us on a musical excursion as we entered a “You Enjoy Myself.”

This “YEM” has some orchestrated parts, but the jam itself after the lyrical section is where things got real tasty. The set had ended and I was eager to see what was in store for us as an encore. Again the band took the stage and gave us a great rendition and only cover of the night, the Rolling Stones “Loving Cup.” This tune is one of those songs that I feel Phish does as well or better than the originator. I absolutely love their take on this and how they make it their own.

The show has come to an end and I just can’t stop thinking about how awesome of a time I just had sitting at my house watching. This is something I have done before and will definitely be doing again. My Picks for the best of this show are the Free-> It’s Ice-> Mound, Maze and Walls of the Cave for the first set. Second set is amazing all around but I would choose the Ghost-> Piper and the Antelope for the best segments to check out! Still smiling and waiting for my next show. Hope to see you out there.

Phish Live at SPAC Saratoga Springs, NY 07-07-2013 Soundcheck: Beauty of a Broken Heart Set 1: AC/DC Bag > Back on the Train > Divided Sky, Free > It’s Ice > Mound, Maze, Limb By Limb, Walls of the Cave Set 2: Down with Disease[1] > Ghost[2] > Piper[3] > Wading in the Velvet Sea > Run Like an Antelope[4] > [5] > You Enjoy Myself Encore: Loving Cup [1] Unfinished. [2] Guy Forget quote from Fish. [3] DEG tease from Trey. [4] Lyrics changed to reference Meatstick. [5] Japanese lyrics. Notes: Trey teased Call to the Post at the start of DWD. DWD was unfinished. Fishman quoted Guy Forget in Ghost. Piper contained a DEG tease from Trey. The lyrics to Antelope were changed throughout to reference Meatstick that would ensue. Meatstick included the Japanese lyrics.