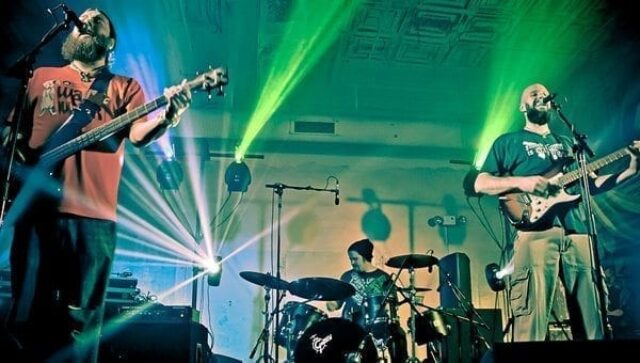 Aaron Kamm and the One Drops 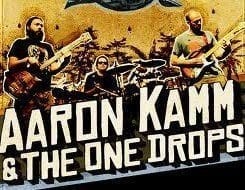 This review was submitted by a reader.  We’d love to get your submissions, too!  Send us your ideas and thoughts to lmnandr@gmail.com. One of the best parts of summer, I think, is listening to live music outdoors. There’s nothing like a warm summer night on a patio in St. Louis, when the music floats up to meet the stars and the view is lined by the cityscape. I go to outdoor shows whenever I can. Check out some video from February 2013 of Aaron Kamm and the One Drops in the attached video section. On July 11, 2013, we went to one of those special summer patio shows, to see Aaron Kamm and the One Drops with Crate 2 Crate Sound at Harry’s on Market Street. Harry’s has one of my favorite patios in town. It’s big, and multi-leveled, and it boasts one of the broadest, best views of the St. Louis skyline in town. We were fortunate enough to have a table up front on the Fourth of July for the fireworks and the band after, Jake’s Leg. That was fantastic! The patio has a small dance floor just in front of the band, and the rest of the outdoor space is scattered with beautiful planters full of seasonal flowers and small seating areas with rattan modular chairs and a few tables. While not particularly comfortable, the outdoor seating at Harry’s creates small conversational areas and certainly accommodates a crowd. There is a full bar where the patio connects to the building, and there is a large open space to one side that is perfect for the performance artists that often come to see bands in St. Louis. LED hoops are a common sight at One Drops shows in particular. We parked on the street, maneuvered through the cracked and buckling sidewalk, and paid our $5 cover at the door. The sound of the patio music was muffled through the building; clearly the band was already settled into the show. It was a little surprising, since the One Drops tend to start playing most nights right about 10:15 or so, and it was still before 10:00. 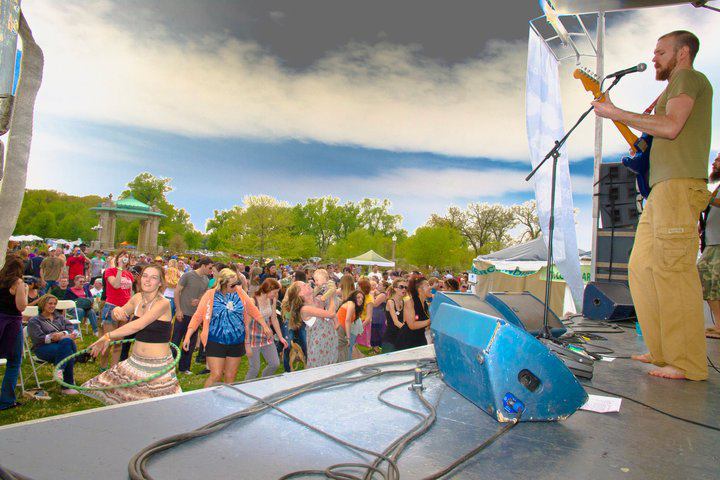 We had talked to a couple of friends and made plans to meet there, and while parking we spotted one of those “my-friend’s-car-that-I’d-know-anywhere”, a truck that belonged to a friend we hadn’t made plans with but weren’t surprised to see. He tends to hear live music at least a couple of times a week, just like we do. Walking through the front door, we ran into more friends and acquaintances, and once on the patio, we knew or recognized virtually everyone there. The One Drops have a loyal following, and it makes the shows so much fun. It’s always great to see so many familiar smiling faces. The patio was mostly full, while the dance floor was mostly empty. That would soon change, of course. We found our friend with the recognizable truck, and he had a table at the back of the patio. We ended up pulling two tables together at the rear of the dance floor to accommodate our crowd, and a whole crew of friends showed up. From where we sat, there was a clear view of the dance floor, backed by the open stage, behind which the city stretched as far as the eye could see. The Arch was perfectly centered in the gorgeous view. It was a warm and pleasant night, and the quarter moon was bright. There were many stars visible in spite of the urban glow, and a light breeze danced across the patio. I sat at the table with girlfriends, chatting about the show; one told me they had been there since 8 or so, and that the band had started around 9 or 9:15. That may be the very earliest start time for any One Drops show ever. Aaron Kamm and the One Drops play a lot of shows in and around St. Louis, and we have heard them in several venues, including 2720 (Cherokee) and the Broadway Oyster Bar. They often share the stage with Crate2Crate Sound, a local DJ with a great sense of musicality, who brings a funky 70’s and 80’s vibe to every show, Cranking dance tunes and disco numbers to get you shaking your booty. The music of C2C is a perfect complement to the blues-rock-reggae jams that the One Drops play. Any time C2C and the One Drops are on the ticket, you know it’s going to be a dance party. 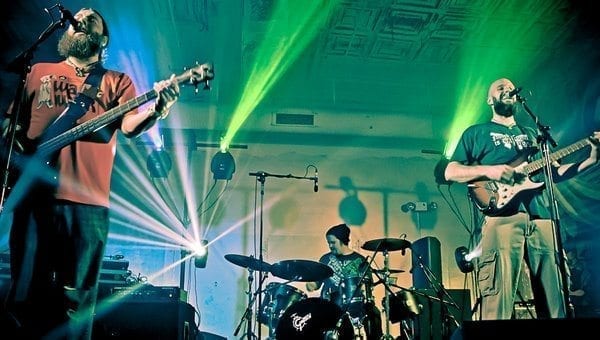 As the night progressed, that dance party happened in grand One Drops style. My girlfriend and I watched as more and more people started dancing, and finally we couldn’t sit still any more. Time to hit the dance floor! So, we worked our way up to the front and joined the crowd grooving away to the music. The crowd is mostly comprised of young, beautiful people. Most are nouveau hippie types: long haired girls with dreamy smiles and long hippie skirts, dreadlocked guys with patchwork clothes, short haired guys in tie dyed tees and shorts, and pretty girls in pretty dresses spinning with glowing hoops. Always friendly, smiling, and endlessly cheerful, Aaron Kamm and the One Drop’s fan base is reliably in a good mood and ready to party. Aaron Kamm’s distinctively soulful voice and guitar, Andy Dorris’ thumping bass and vocals, and Sean Raila’s tight drum sequences make for an incredible mix of rock, reggae, and funk that has the entire place moving the whole night, regardless of the venue. Even before the dance floor filled up on this night, folks were bobbing their heads and moving to the music as they talked to friends, the hoopers had claimed the back of the patio with their glowing LED hoops, and everyone who walked in the door was clearly swept up in the groove. By set break, the dance floor was full and the crowd was rocking. We headed outside to take a break from the crowd with some friends. Crate 2 Crate had the patio hopping. After break, we rejoined the party, and the One Drops played to a smiling dancing crowd until the wee hours of the morning. It was a wonderfully fun night.   Check out some video from February 2013 of Aaron Kamm and the One Drops in the attached video section.     This review was submitted by a reader.  We’d love to get your submissions, too!  Send us your ideas and thoughts to lmnandr@gmail.com. 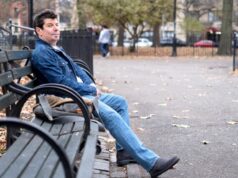 Live Music News & Review was born out of a love of live music and the wish to chronicle the amazing shows happening around the country. Stories and reviews are born both from our editorial board and from readers just like you around the country.
Contact us: lmnandr@gmail.com
5,254FansLike
198FollowersFollow
304FollowersFollow
6SubscribersSubscribe