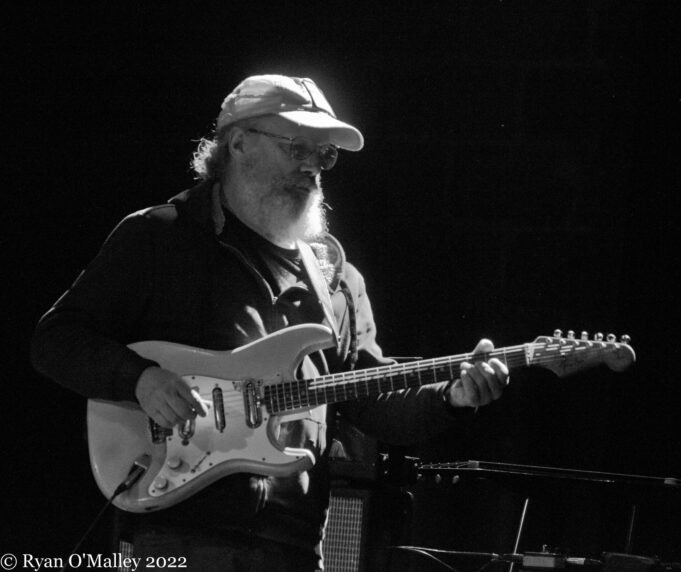 In 1984 guitar virtuoso Steve Kimock and drumming ace Greg Anton, after playing together for several years in different projects, formed a new outfit called Zero. Over the ensuing decades the group went through various lineup changes, but continued to release numerous critically acclaimed studio and live albums, even catching the attention of late Grateful Dead lyricist Robert Hunter who would pen several songs for the outfit.

For a majority of its existence, Zero was known for its high energy improvisational concerts, but the shows really seemed to reach their peak on the West Coast. With so many tie-ins to the Grateful Dead family, it was almost inevitable. Fast forward a few decades, and Zero has returned to the road with Kimock and Anton anchoring the reconfigured outfit and bringing Zero’s music to both West and East coasts including a recent stop at the Sherman Theater in Stroudsburg, Pa. on October 29.

A small but extremely appreciative crowd welcomed the current version of Zero – Kimock, Anton, bassist Pete Sears, saxophonist Pete Fleck, trumpeter Hadi Ad Saadon, keyboardist/vocalist Spencer Burrows, and for a few shows including the Stroudsburg stop, Kimock’s son John Morgan Kimock on drums – to the stage with the band setting the mood for the evening with the funky opening number “Berm,” which showcased Fleck and Saadon throughout. While Zero is more known for being instrumental, the addition of Burrows allowed for some strong vocals including an early set highlight in the form of Blind Faith’s “Can’t Find My Way Home,” with Burrows adding his own flare to the legendary vocals of Steve Winwood.

With Kimock being a founding member and also a family man, it’s no surprise that Zero was the first band John Morgan Kimock ever saw in concert. For his brief run with the band on the current tour, the younger Kimock and Anton have been forming a superbly tight two drummer percussive drive that was on full display during a scorching rendition of their song “Ermaline.” Letting the music be his guide, Steve Kimock also delivered one of his best solos of the night during “Ermaline,” which showcased his complete understanding of the guitar and illustrated why at one point in his life the late Jerry Garcia called Kimock his favorite guitarist.

Not to be overlooked, Sears – a veteran of Jefferson Starship and Moonalice among many other acts – provided tight low end throughout the evening, helping make the rhythm section deliver some of the tightest funk around today as was highlighted by the one-two-punch of “Anorexia,” and “Baby Baby.”Anton and John Morgan Kimock put on a solid drum solo that started off with jazz and eventually morphed into some tribal percussion highlighted by Kimock playing some rhythms on his drum sticks and Anton building up momentum which led into a frenzied “Tear Tags Off Mattresses.”

With the night leaning towards more upbeat selections from its catalogue, it was fitting that Zero chose to end the set proper with a spacey but thumping version of “Merle’s Boogie” which showcased some fine keyboard work from Burrows. A welcomed change of pace followed with the encore of a slow but poignant “Many Rivers to Cross” highlighted by some tender guitar fills from the elder Kimock. While the crowd at the Sherman Theater was substantially smaller, the band delivered a performance that would have been captivating in an amphitheater or an arena. If Zero was formed to give some of the top musicians in the jam scene an outlet for new collaborations some 38 years ago, it was a brilliant move. The music the outfit has created has been nothing short of phenomenal and luckily they are still giving people the chance to catch the famed outfit out on the road.

Prior to Zero, Northeast Pa. raised guitarist Justin Mazer brought his extraordinarily tight trio to the Sherman for an enjoyable 40 minute set. Mazer has a storied history of playing with some of the biggest names on the jam scene, including Grateful Dead co-founder Bob Weir and Philadelphia native Tom Hamilton. For Saturday’s performance, Mazer brought along bassist Alex Luquet and drum master Al Smith for a rousing run through instrumentals like “Nighthawk” and “Nearly Misguided.” Mazer has a penchant for Fender Telecaster guitars and, like the guitars are known to do, the music took a slight lean towards the country side, but blended perfectly with a mix of psychedelia and blues. Meshed with the tightness of Luquet and Smith, in proved to be an immensely satisfying opening set.