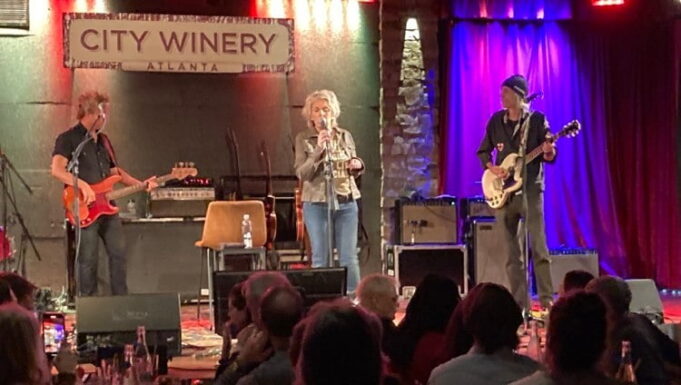 Two years after Americana singer-songwriter Lucinda Williams suffered a stroke, she was back, better than ever, during a triumphant four-night residency at the Atlanta City Winery last week.

Williams, 69, had to be helped up to the microphone by an assistant and appeared a little fragile. She also could not play guitar because her left arm was affected. But she stood at the mic non-stop through a rocking, two-hour set with her longtime three-piece band, blowing through 18 songs covering albums dating back to her acclaimed 1988 release Lucinda Williams through her 2020 release Good Souls, Better Angels.

Amazingly, her voice sounded better than ever, with a higher pitch and clearer enunciation than in recent albums.

Williams’ enthusiasm and joy in being back on stage were evident as she smiled throughout the show and told lots of stories about many of the songs. She opened with the stark “World Without Tears” and it was quickly evident she was on her game.

“If we lived in a world without tears
How would bruises find
The face to lie upon
How would scars find skin
To etch themselves into
How would broken find the bones.”

Lucinda Williams did a number of her signature sad songs such as “Lake Charles,” about the death of a friend, and “Big Black Train, “ about her battles with depression. She did “The Night’s Too Long” from her self titled album, telling the story about how Nashville record execs tried to prevent Patty Loveless from covering the song because they thought it too sexual. Williams thanked Loveless for standing up to them.

She also gave shout outs to other artists who have covered her songs, including Mary Chapin Carpenter, Emmylou Harris and Tom Petty. The show started rocking about halfway into the set, as she did songs such as “Metal Firecracker” from her acclaimed 1998 album Car Wheels on A Gravel Road, for which she won a Grammy.

Williams repeatedly chastised the Nashville establishment for not understanding her. “I was too rock for country and too country for rock,” she said. She joked that her Grammy was for Best Contemporary Folk album though the album was far from being a folk album.

Williams, a native of Louisiana, dedicated “You Can’t Rule Me” from Good Souls to the Supreme Court. It was her only political comment of the night. She is rarely shy about making her views known. She also did not mention her stroke or the weeks she spent in rehab to get back to where she is now. Her longtime band, Butch Norton on drums, David Sutton on bass and Stuart Mathis on guitar rocked like never before on many songs.

After her last song, “Joy” — “You took my joy, I want it back,” she exited the stage, again with help, to a standing ovation that lasted what seemed like minutes.

Lucinda Williams came back for a three song encore then headed back off stage, grinning from ear to ear, stopping to take in more adulation and blowing a farewell kiss to the enthusiastic sold out crowd. It was a night to remember, a triumph in every respect.

The Night’s Too Long

Let’s Get the Band Back Together

You Can’t Rule Me

Earlier in 2022 Williams visited Atlanta for a show at Chastain Park in June: