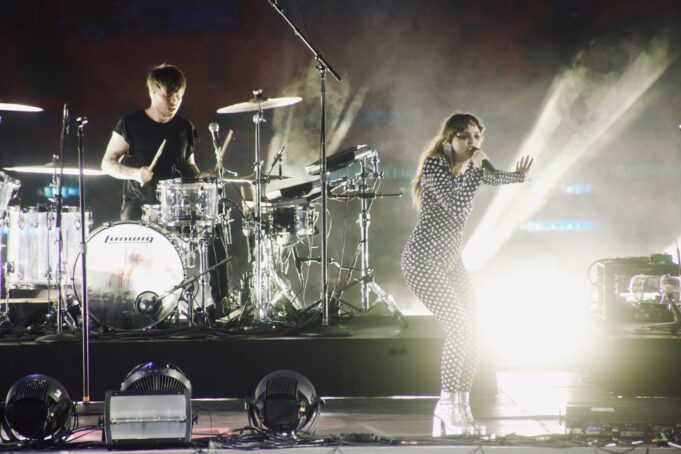 Sharing the stage with the legendary Grace Jones at the Hollywood Bowl on September 25 2022. Words by Harriet Kaplan, Photos by John Snedden

The Scottish pop band Chvrches did manage to make more than a serviceable impression close to halfway in their set and go beyond whileco-headlining with Grace Jones.  Lauren Mayberry is very likeable, spunky band leader. She demonstrated a lot of high energy onstage running from one end of the stage to the other. Her lightweight, helium sounding vocals had some power and plunk. Mayberry wore a sequined leotard in homage to Grace Jones. In fact, she expressed she was beyond excited to open for her. There was a sense of irony in having admitted the Chvrches played the Echo being their first time in L.A. and now the Hollywood Bowl.

Yes, it’s quite a leap!  Even the comment about finding pubic hair at a club was a bit shocking and subversive compared to being at the “refined and classy” Hollywood Bowl.

Later on in the stage, Mayberry briefly left the stage and reappeared in jean shorts and white t-shirt which read “Final Girl.” Shocking or not so shocking, Mayberry appeared in fake blood on her arms and face. But that makes sense given the band’s new album “Screen Violence” does have a brooding sound reminiscent of 1980s goth and new wave. Also, there was also a horror movie theme with Nightmare on Elm Street played in the background. “Screen Violence” has broader implications as well: the band was conceived on the internet, and there is commentary on their pandemic inducted isolation in their lyrics and more.

Check out the review of Grace Jones plus Charlotte Adigéry & Bolis Pupul from that same night here.

Chvrches delivered a professional and solid show of moody synth-guitar driven pop at the Hollywood Bowl. However, to perfectly honest, one wouldn’t exactly think immediately of the Chvrches co-headlining with Grace Jones. They are a modern act and Grace Jones is forever modern herself and “en vogue” so to speak so maybe at that unlikelihood is really more likely then.

He Said She said

How Not to Drown

Asking for a Friend

Check out the review of Grace Jones plus Charlotte Adigéry & Bolis Pupul from that same night here.