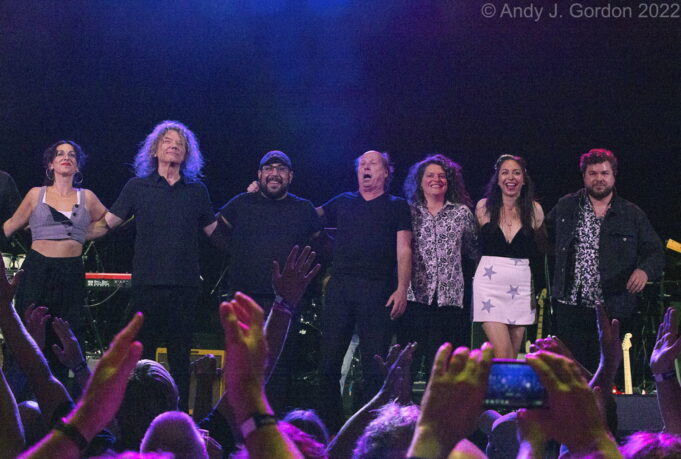 Original Talking Heads member Jerry Harrison and renowned touring member of the band, Adrian Belew celebrated the adored 1980 LP Remain in Light at The Wiltern Theatre on September 29, 2022. They were joined by a brilliant group of musicians, most of whom were members of Turkuaz until that band dissolved in 2021. The magical show covered many tracks from the album and other songs from the monumental era of the band’s history, leaving an enthusiastic audience spellbound as the legends delivered a memorable performance.

The show opened with a discussion about the Talking Heads’ rise to fame and impact on music as well as American culture. The conversation was led by comedian and musician Tawny Newsome. She encouraged Harrison and Belew to tell stories about that wild time. Belew opened up about touring with Frank Zappa’s band, getting recruited by David Bowie to play on his tour and the making of Talking Heads’ Remain in Light. Harrison talked about working with David Byrne and Brian Eno as well as the short time they had to rehearse before playing live.

Harrison and Belew originally reunited to perform Talking Heads material at the 2021 Peach Music Festival with Turkuaz. That was Harrison’s first live performance since 1996. There were a few other recent performances with the combined group, including Floyd Fest and BottleRock Napa before this Wiltern show. The reunion of Harrison and Belew was designed to celebrate the 40th anniversary of the release of Remain In Light, but the plans for 2020 got delayed due to the pandemic.

Check out the full gallery of photos from this night by Andy J Gordon here.

The Wiltern show featured amazing versions of songs from Remain in Light like “Crosseyed & Painless,” “Houses In Motion” and “Born Under Punches (The Heat Goes On).” Belew grinned mischievously as he delivered creative and distorted solos when he was not singing. Harrison played rhythm guitar and inventive keyboard voyages while also singing lead and harmonizing. Garett, Elias and Schwartz belted out beautiful harmonies throughout the set. Each also had moments to sing lead. Schwartz took over on “Once in a Lifetime,” another Remain in Light classic. Garett began singing lead on “Slippery People” and Elias handled the second stanza. Greg Sanderson played a beautiful sax solo during that song.

The band played tracks from other Talking Heads albums as well as a couple of songs from Harrison and Belew’s solo careers. For the 1979 African pop inspired “I Zimbra,” from the Fear of Music album, guest guitarist Angie Swan (who tours with David Byrne) joined the band. Harrison took over on his song “Rev It Up” that included great Brouwers keyboard and Brodhead guitar solos. Belew said he was combining Talking Heads with King Crimson before he broke into a version of “Thela Hun Gingeet” that included another one of his wild, distorted guitar journeys.

Other Talking Heads classics like “Psycho Killer,” “Life During Wartime” and the remake of Al Green’s “Take Me To The River” were performed masterfully. Their version of “Take Me To The River” epitomized the magical show. Belew started on vocals, then Garett and Elias took a stanza each as the band played the relentless, driving beat. They brought the volume down as Schwartz took over vocals. As the beat and volume picked up, Harrison led the crowd in rhythmic clapping as everyone harmonized until the song ended.

Everyone left the stage for a very brief break before they came back out to end the show with “The Great Curve,” another high energy track from Remain in Light. This time they really called it quits and did a group hug and bows at the front of the stage as the crowd stood and applauded wildly. It was a magnificent celebration of a classic album plus other tracks from the Talking Heads song catalog by a supremely talented group of musicians that will not be forgotten.

Born Under Punches (The Heat Goes On)

Rev It Up (Jerry Harrison song) (Belew off stage)

Once in a Lifetime

Take Me to the River (Al Green cover)

Check out the full gallery of photos from this night by Andy J Gordon here.