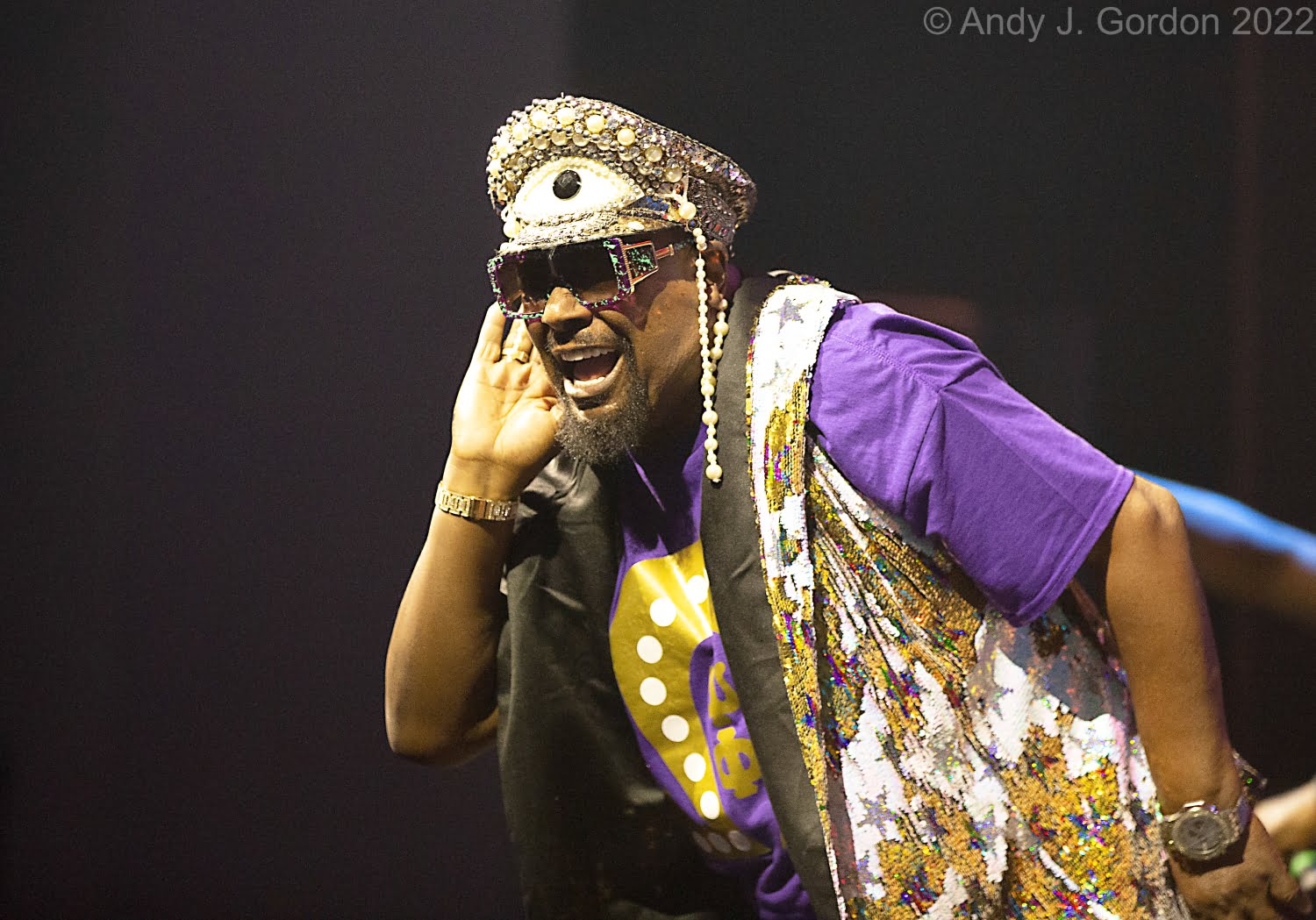 “Dr. Funkenstein” is still alive and kicking. The 81 year old George Clinton may claim this is his final tour, but we have heard that before. We’ll put the retirement party on hold for now because Clinton proved he is still a dynamic performer as he led a wild version of Parliament Funkadelic through a whirlwind show at the gorgeous, new YouTube Theater in Inglewood, California on August 18, 2022. Modern funk and jam world friends Dopapod, The Motet and Karl Denson’s Tiny Universe came along for this One Nation Under The Groove tour stop. A rowdy Los Angeles crowd enjoyed a night of modern and old school funk, soul and prog rock that shook the house.

There was much to like about the YouTube Theater show. The sparkling new venue is a magnificent space for live music. The six thousand capacity site has comfortable seating, excellent sight lines, clear, loud sound and creative lighting that made the bands look and sound excellent. The performances were stellar, but with so many groups on the lineup, Dopapod, The Motet and Karl Denson’s Tiny Universe got stuck with brief sets that left the crowd begging for more.

Dopapod came out swinging with a trippy instrumental. The four piece band with Eli Winderman (keys/vocals), Rob Compa (guitar/vocals), Chuck Jones (bass) and Neal “Fro” Evans (drums) played a tight, short set that included elements of jam, electronica and progressive rock. The highlight of the set was “Grow” from their self-titled seventh full-length album that dropped on May 27. It had superb vocals and intricate, psychedelic solos by Winderman and Compa.

Denson sang, but his saxophone and flute playing were the set highlights. Songs like “Biggest Fan,” “Brother’s Keeper” and “What If You Knew” allowed Denson to play extravagant sax solos while also giving bandmates Williams, Giordano and Littlefield room to shred as well. While the KDTU material was fantastic, a cover of British Afro-pop band Osibisa’s “Music For Gong Gong” was a pleasant surprise. “Satisfied” closed the set wonderfully with heavy funk solos by Williams, Denson and Littlefield.

As the anticipation built for the arrival of the Mother Ship, fans wondered if George Clinton could still deliver the funk like he has done for over 50 years. He answered that question shortly after several of the Parliament Funkadelic ensemble laid down a thumping beat – Clinton marched out with his posse from the Funk Mob and proceeded to tear the roof off the sucker.

It is really difficult to express in words what a full Parliament Funkadelic show brings to the stage. If you could visualize a three ring circus, except with only one ring and all the lions, tigers, bears, seals, acrobats, trapeze artists and jugglers were performing at once, you might get the idea. Somehow Clinton and the huge group pulled it off. He was surprisingly energetic, both in voice and action. Clinton sang forcefully, danced and meandered across the stage barefoot while dressed in a blinged out hat and outfit.

The hip hop and rap journeys, led by the third generation members of the group, may be one evolution of the funk genre, but the older material like “One Nation Under a Groove” and “Flashlight” were the best parts of the show. Clinton sat in a spinning office chair near center stage while the younger generation vocalists belted out aggressive, N-word filled rap lyrics backed by familiarly thumping bass lines. Clinton has always encouraged his family and band members to step out, explore and create, so he knows that handing off the reigns to the new generation comes with changes.

One of the female singers led the group on a cover of House of Pain’s “Jump Around.” All of the band vocalists joined in while gyrating across the stage and many in the crowd were up and bouncing. Even Clinton briefly hopped at center stage with his bandmates. That crazy moment led into a rowdy “Give Up the Funk (Tear the Roof Off the Sucker).” For the classic “Atomic Dog,” members of the band pulled ladies from the audience who came on stage and danced with the band. It seemed like a fitting end, but another rap infused recent release called “Mama Told Me” ended the show. The young rappers gave props to Clinton as he exited the stage to thunderous applause and the band finally wrapped up the crazy, funky, entertaining show.