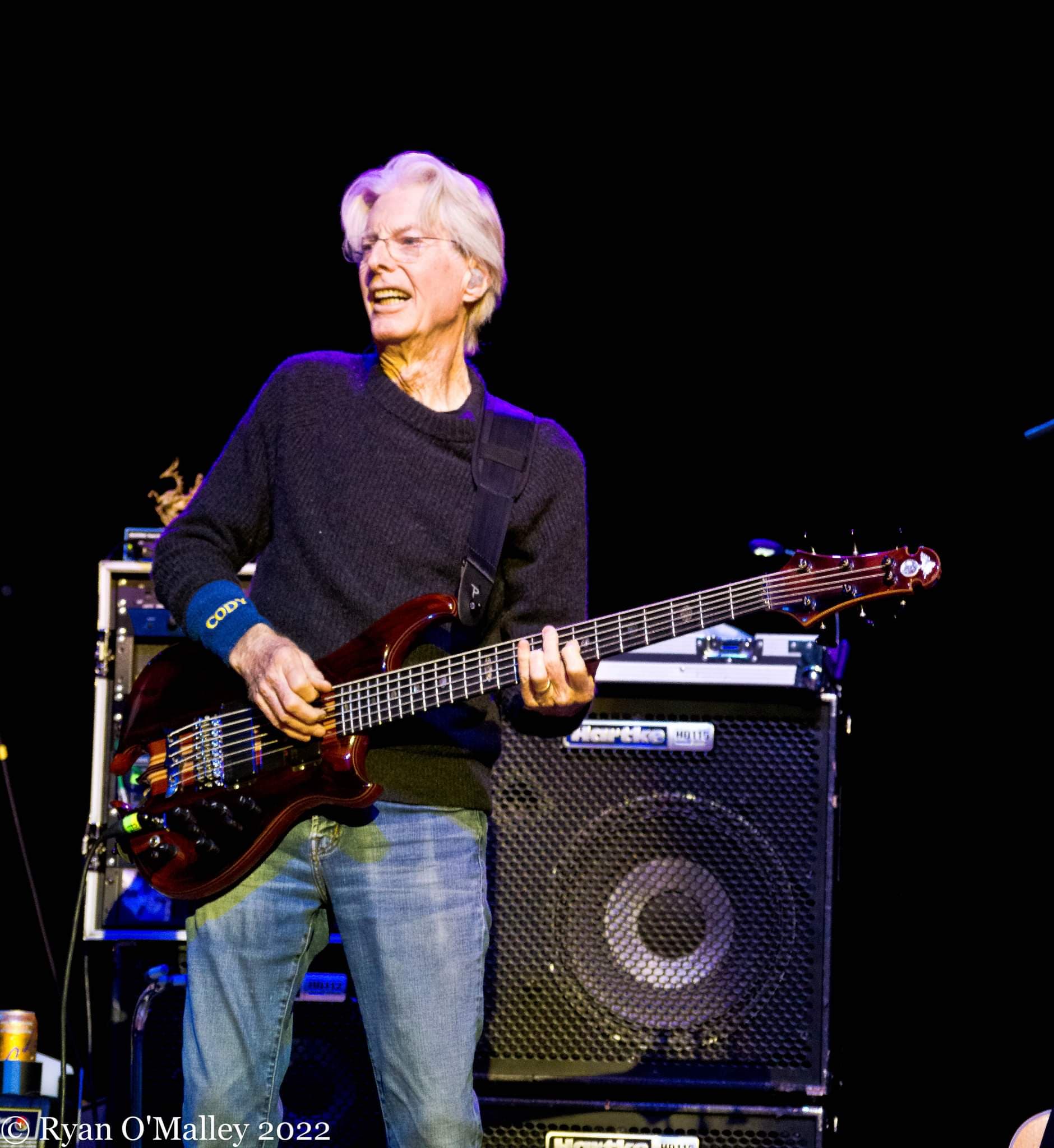 On August 20 the Grateful bassist came with a big band to Bethel, NY. By Ryan O’Malley

“Where would this world be without Phil Lesh?” It was a simple question asked by multi-instrumentalist Larry Campbell as he finished introducing an impressive list of musicians who were on stage at the Bethel Woods Center for the Arts in Bethel, N.Y. this past Saturday. Campbell’s inquisition not only garnered rousing applause, but was also a fond reminder that the 82 year-old Lesh – who spearheaded the performance joined by Levon Helm’s former Midnight Ramble Band – has been an integral part of music for more than six decades, and as a founding member of the Grateful Dead, helped develop the psychedelic jam band scene that still thrives today.

But there is more to Lesh and the Dead’s music than just psychedelic jamming. There’s a blend of Americana, bluegrass, country, jazz, and blues that all helped define the Dead’s sound. So it was fitting that between the 14 musicians on stage in Bethel that night, every genre that could be tied into the Dead’s music was well-represented, beginning with “Tennessee Jed,” a country/blues number that showcased Campbell’s strong vocals. Twenty eight year-old Connor Kennedy, a highly respected guitarist from the New York region, took center stage to lead the outfit through the Jerry Garcia Band chestnut “Rubin and Cherise,” which also saw Campbell switch over to mandolin, perhaps in a slight nod to the song’s lyrics.

From taper Keith Litzenberger whole show audio, use the arrows to toggle between songs:

A lively “Scarlet Begonias” meshed nicely into a thumping “Not Fade Away” which had the intimate but passionate crowd clapping along to the signature groove with drummers Tony Leone and Shawn Pelton. Although normally reserved for the ending of the night, the song was an early highlight thanks to some fiery interplay between guitarists Campbell, Lesh’s son Grahame, and The Band’s Jim Weider. A slow but poignant “Brokedown Palace” was another first set high point as the younger Lesh and Amy Helm, daughter of Levon Helm, delivered exquisite vocal performances on the somber classic. Having a three piece horn section – Jay Collins, Steven Bernstein and Erik Lawrence – on stage was certain to add to the night’s festivities, and the fan favorite “Franklin’s Tower” had a new sense of energy to it thanks to the inclusion of the brass section. The same could be said about The Band’s “Ophelia,” which was sung by Leone and had nearly everyone in the crowd on their feet and dancing.

Throughout his post-Grateful Dead career, Lesh has made a name for himself with his revolving lineups that seem to encourage his fellow musicians to take the Dead’s material and make it their own. Such was the case with the first set closer, “Sugaree,” that put Campbell’s wife, Teresa Williams, into the spotlight. While mostly singing harmony throughout the evening, Williams’ absolutely brilliant rendition of the Garcia ballad was filled with bluesy, emotional vocals that brought the house down.

A full gallery of photos from this night by Ryan O’Malley is located here.

To start the second set, Levon Helm’s grandson, Lavon Henry Collins, replaced Pelton on the drums for a fairly standard run through the Dead’s “disco Dead” era staple, “Shakedown Street.” The number was fronted by Kennedy, who seemed to be having a blast throughout the evening. Always a longer cut when played live, “Eyes of the World” stretched beyond the 10 minute mark and featured some great guitar work from Kennedy along with strong vocals from Helm. With a majority of the musicians on stage coming from the Midnight Ramble Band, it was no surprise that more material from The Band would make its way into the set. After some explorative guitar work from Campbell, the outfit delivered a rollicking “Chest Fever,” which saw the elder Lesh sport a big grin numerous times.

Unlike his days with the Dead, Lesh gets to sing at nearly all of his shows, and Saturday was no different when the soft opening to “Unbroken Chain” began. At age 82, is Phil Lesh the best singer in the world? Absolutely not. But he was never in that role even during his 30 years with the Dead. However, when you’re at a show and you hear “Unbroken Chain” start, you don’t want anyone but Lesh singing it. It’s part of the magic the Dead created between themselves and their fans. Up next was a surprise in the form of “Atlantic City” by Bruce Springsteen. In the early 90’s, The Band released a cover of the song on their “Jericho” album, so it was fitting that Amy Helm delivered the number with her graceful vocals. (editor’s note: this song was produced by Woodstock’s Professor Louie, who produced the last three albums by The Band. Coincidentally, because the Band opened for the Grateful Dead for the final 1995 shows at Soldier’s Field, Professor Louie took to the sound board and mixed those final two shows. The history between the Band and the Grateful Dead is one that dates back some five decades.)

Coming up on the end of the night, the crowd started wondering what would bring the second set to a close, and the outfit surprised nearly everyone by launching into “River Deep, Mountain High,” an R&B number most associated with Ike and Tina Turner. You read that correctly; the Grateful Dead’s Phil Lesh was on stage covering a Tina Turner song. And they crushed it. Williams again took over on lead vocals and sounded pristine as the rest of the outfit flawlessly tackled the old standard. After a brief break, Lesh came out on stage to deliver his “Donor Rap” where he talks about the importance of being an organ donor, and assembled everyone on stage to close the night with an expected-yet-pleasing rendition of The Band classic “The Weight.”

Along with celebrating the 53rd anniversary of Woodstock, which was held on the grounds of Bethel Woods in 1969 and Lesh is a veteran of, the night mostly showcased the music that was made possible by the legendary bassist and his cohorts in the Grateful Dead. It was a night that celebrated nearly every genre of music, much like the Dead did for 30 years. At the end of it all, you start to realize Campbell was right: where would this world be without Phil Lesh?

Encore:
The Weight
(The Band cover)

A full gallery of photos from this night by Ryan O’Malley is located here.