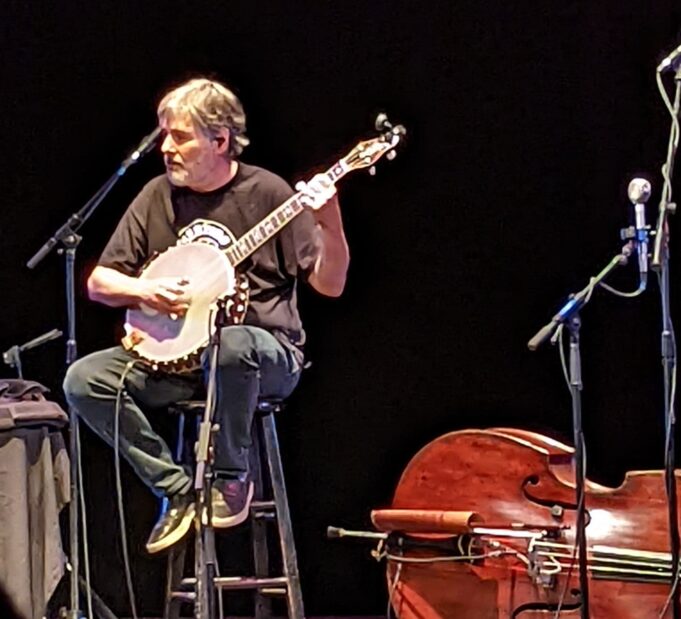 Bela Fleck brings his bluegrass ensemble to Northampton MA to the Academy of Music on April 03 2022. By Angel Simon

I was so excited to see Bela Fleck on this warm and rainy night in Northampton, Massachusetts. I had a lovely dinner at Osaka with my companion for the night, Miss Chris, then we were off to see the show.

We had excellent seats near the stage at the lovely Academy of Music theater. The house seemed pretty full as the show began. With the lights low, Sierra Hull, the mandolin player, came on stage first. She was plucking a lovely melody, and then the guitar player, Bryan Sutton, came on and joined the tune. And then they were followed by the fiddle player Stuart Duncan, the upright bass player Mark Schatz, the dobro player Justin Moses, and then finally, Bela Fleck himself, banjo at the ready.

The ensemble then proceeded to give a masterclass in their instruments. Each player is so adept at their craft, they made it look easy. Every song left me with my jaw open and wanting more. There was easy banter on stage between the players and they all were enjoying themselves.

At one point a fan hollered “Congrats” from the audience, and one of the players said, “Oh yeah! Bela just won a Grammy tonight!!”  The crowd cheered, and Bela just nodded and waved.

You would think Bela would dominate the stage as his name is what pulled people like me in, but he in no way played the most. Each player had their time to shine in almost every song and shine they did. On one selection, bass player Mark Schatz put his bass down. I thought he was going to sit out for a song, but then I saw him on the side of the stage, on a piece of wood tap dancing! You do not see that very often!

The music selection that night leaned more toward bluegrass standards and traditional sounds than the jazz infused technical stylings of the Flecktones. Fittingly this band is called My Bluegrass Heart, which is a project that Bela has developed over the last few decades and has incorporated the best bluegrass players in the world within an ever-changing lineup. Bela himself said that this version of the band was to feature a younger generation of players to illustrate where bluegrass is headed.

Sierra Hull shined on the mandolin. Her husband, Justin Moses- picked up every instrument on the stage, gently nudging aside various players so that he could deftly illustrate his diverse talents. Bryan Sutton was a very proficient and fast picker on the guitar. Mark Schatz on upright bass brought the deep tones but also remarkable stories. And Stuart Duncan rounded out the sextet and had great chemistry with Justin Moses when he was on dobro.

From earlier this tour:

All these amazing players held their own with the most celebrated banjo player of the last forty years, Bela Fleck. It takes an expert to coral such amazing players, and to provide them a songbook and writing challenging enough to spark their creativity. Fleck proved up to the task and managed to both lead the band and seem to be casually following his assembled roster of master pickers.

Overall, this was a highly entertaining and enjoyable show.