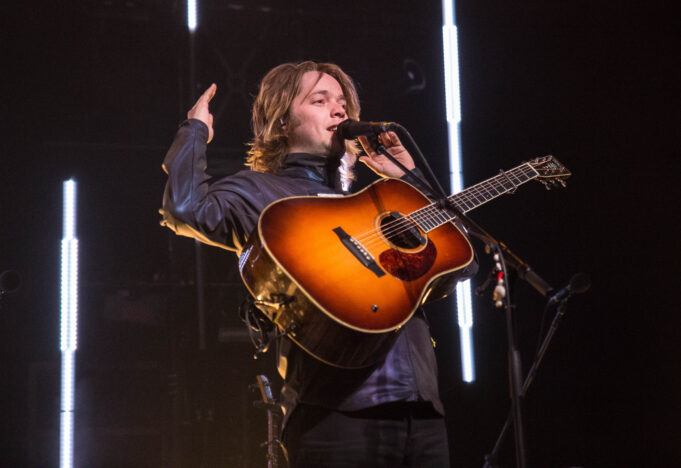 March 15 2022 Billy Strings and his band are the opening night of the new venue, Roadrunner in Boston, MA by JD Cohen

Businesses along Guest Street in Boston had a bit of a surprise when they opened their doors on Tuesday morning. Billy Strings fans started lining up before 6:30 am for the opening of the new Roadrunner 3,500 capacity music venue at Boston Landing development in Allston-Brighton. Many workers in the neighborhood had never heard of Billy Strings and had no idea why people were lined up down the block for a good potion of the day.

But for Boston music fans, especially jam band fans Tuesday was a big day and the feeling around the new venue was celebratory. Boston has no other indoor facility to host mid-tier bands and the pandemic has seen smaller venues closing. Roadrunner is being billed as the largest indoor general admission venue in New England and the hope is that it will attract more bands to the area and open opportunities for more live music at all levels. The design and amenities at Roadrunner were conceived with the artists in mind, as well as the fans. State of the art facilities and conveniences for artists to make it easy and comfortable for musicians and their crew should further Boston’s reputation as good place for bands to play.

The opening of a new concert hall in Boston would be enough reason to celebrate. However, for a certain group of dedicated music fans having Billy Strings be the very first act to perform in the new spot was especially exciting. Billy Strings attra;cts the same fan base you would see at a typical Grateful Dead related event with the addition of older bluegrass enthusiasts and twenty something music fans eager to see one of the hottest rising stars in their same age bracket. Having a newer act that draws from a wide age demographic seemed like the perfect choice for opening night at Roadrunner.

At 6:30 pm the doors opened, and fans started streaming in without a hitch, the staff had everything under control and was a sign for how well things would go for the entire evening, hopefully a sign of good things to come for the venue. If the inside of Roadrunner looks strikingly familiar to Boston music fans, it is because it was designed by Stephen Martyak, who also designed the Sinclair in Cambridge. Like the much smaller Sinclair, the sightlines at Roadrunner are particularly good, with good views of the stage from almost everywhere. Unless you are packed in on the floor, there is easy access to four bars and bathrooms. It is worth noting that Tuesdays show was sold out and filled to capacity but lines at the bars and the bathrooms were almost nonexistent, even at the set break when most people head to the bathroom, get a drink or both.

Billy Strings came on promptly at 8:30 and started with comments about the new venue, making it clear how excited he was to be breaking it in. When the first notes of the opening tune, the traditional “Big Ball in Boston” hit it was clear that the acoustics and the sound at Roadrunner are some of the best in the city. Although the Billy Strings band is mostly acoustic the music has the punch of an electric rock band, and the big sound filled the room nicely. However, bluegrass has fine picking and if you do not have good sound, you can miss some of the most inspirational musicianship which this band has in abundance. Tuesday night at Roadrunner with the room filled you could hear every note the band played and picked with clarity and volume. Each member of the band is a genuine talent in their own right and Billy Failing (Banjo) and Jarrod Walker (Mandolin) get plenty of solos to show off their unique skills. Royal Masat on acoustic bass is the secret weapon of the band and according to Billy “the backbone of the whole god damn operation, and the foundation upon which we stand.”

One of the nights peak moments came midway through the second set with the extended flashy, funky, and soulful version of “15 Steps”. Other highlights included the blistering fast and fun “Ruby (Are You Mad),” the Phish cover “Back on The Train,” the Grateful Dead’s “Brokedown Palace,” an odd choice for a brand-new venue but maybe it was supposed to be ironic and the fantastic eleven plus minute Bad Livers cover of “Lumpy, Beanpole & Dirt”.

The three-hour show had the usual mix of traditional bluegrass, jamming folk infused picking and selections from each of the Billy Strings studio albums. As Billy told the crowd, “Not bad for a first gig in this place, it’s pretty cool.” One can only imagine the many magical moments that will take place at Roadrunner in the months and years ahead.

Pyramid Country
(>)
Fire on My Tongue
(>)
Must Be Seven

I Only Exist
(The Stanley Brothers cover)

Back on the Train
(Phish cover)

Ruby Are You Mad
(The Osborne Brothers cover)