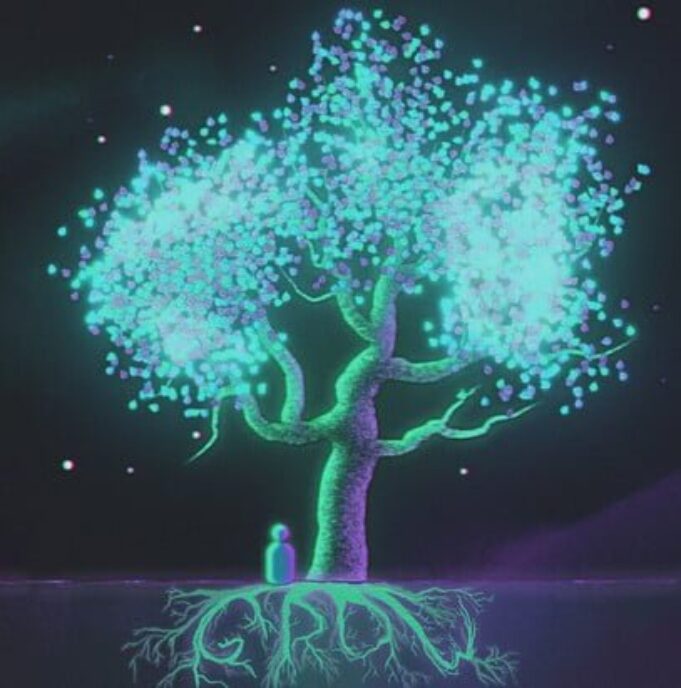 NEW MUSIC COMING THIS SPRING, and a nice schedule of festivals and theater dates await these progressive journeyman.

Dopapod have released their new single “Grow,” riding an intergalactic groove punctuated by a head-nodding bassline, slick guitar, simmering cymbals, and smooth vocals. Soaring keys and synth lines crescendo as the song accelerates before returning to where it started, true to Dopapod’s palindromic existence. “The song could be about a character time traveling back to the Big Bang,” explains keyboardist and vocalist Eli Winderman. The lyric ‘big things have small beginnings’ is a fitting homage to a line from Ridley Scott’s movie Prometheus. “Microscopic particles are the start of life. This is how we evolve,” and evolve they have.

“Grow” is additionally accompanied by an animated video, the second in an ongoing series by the group that ties together the sights, sonics, and lore of Dopapod. Each forthcoming chapter digs deeper into the group’s mythology and steps unflinchingly into the fantastic. Each entry is another turned corner in the labyrinth, and the group’s music is the guide to the center of it all.

The quartet—Eli Winderman [keys, vocals], Rob Compa [guitar, vocals], Chuck Jones [bass], and Neal “Fro” Evans [drums]—present albums as experiences meant to be shared out of your speakers and on stage. Their hypnotic hybrid of funk, rock, jazz, bluegrass, and electronica, with musical influences that range from metal to jazz and Americana, from Medeski Martin & Wood to Pink Floyd, access a heightened level of cosmic harmony in their music, all of which bloomed brilliantly on 2009’s Radar, and continued to blossom on the likes of Never Odd Or Even [2014] and Megagem [2017].

After a marathon near-decade run, they enjoyed a year-plus hiatus to realign and reenergize before reuniting with a new fire during 2019 and partaking in something of a “soft return,” which was cut short by the pandemic. The forced time off ushered in a laser-sharp focus on new music, while picking up the threads of a “concept catalog” that was first introduced on Never Odd Or Even, and bringing the music full circle. While exploring some of the band’s favorite recurring concepts of time travel, balance, and binary pairs, Dopapod brought their fascination with palindromes full circle. The spelling of Dopapod is itself a palindrome, and “Grow” was purposely released on Twosday. It’s all in the balance.

The hiatus, followed by forced downtime of the pandemic, ushered in a period of deep creative reflection and personal growth. Both individually and collectively, the members of the band spent time absorbing and reprocessing their work and the conceptual through lines of their catalog, resulting in an imaginative outpouring of new ideas and materials, including a collaboration with Tandem Media on an accompanying animation project. As always, there’s more to Dopapod’s vision with the union of the physical and digital elements. “It does feel like we made all these albums and made a time machine,” says Compa, “And now we’re at the new frontier, wherever we’re going.”

“Grow” follows the single “Think,” which was released late last year as the first entry in the evolution of the group’s audio and visual offerings. The impetus of the song came to the band while the country was knee-deep in polarization, and the group felt a need to convey their feelings while witnessing others fall into a rabbit hole of dangerous binaries. “You can do no wrong, as long as you do everything right all of the time,” is a line the band imagined could come from a talking head, and as always Dopapod crafts nuance in their work through form and function.

In addition to the new music and animation project, 2022 will be filled with heavy touring, which will feature a mix of festivals and Dopapod dates. For their shows, the band has partnered with two incredible charities, RAINN, the largest U.S. anti-sexual assault organization, and Camp Courageous, an organization that provides year-round recreational and respite care opportunities. A dollar of each Dopapod ticket sold will go to these charities, and fans will have the option to choose which of the two charities to which they can donate.

“At the end of the day, we hope we represent being yourself, being unique, and trying to do something new,” exclaims Winderman. “If everyone does that, I think the world would be a much more interesting place all around.”